Is the TSA Pressuring Americans Into Submitting to Background Checks? 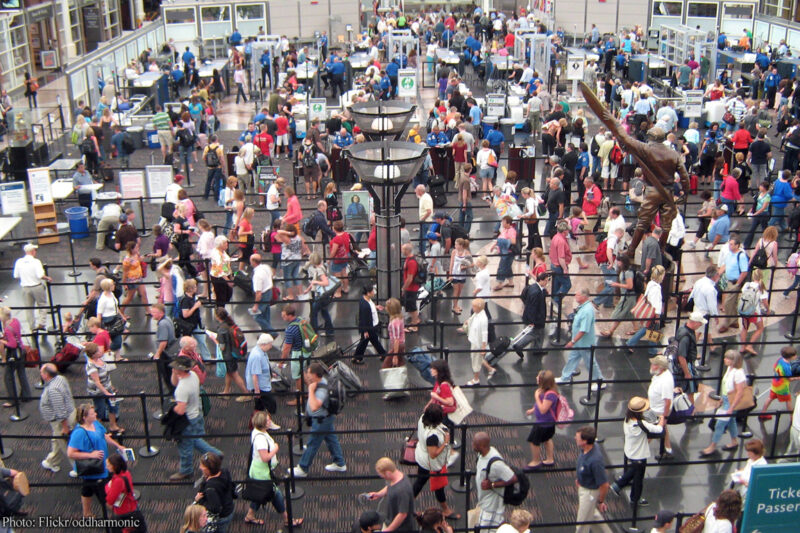 The New York Times had a piece Tuesday on how security lines at airports are getting longer—in many cases, dramatically so, with waits of several hours at some times and airports. For example, the Times reported,

Ben Cheever, a support engineer for a cybersecurity firm, recently missed a flight in Seattle despite getting to the airport two hours ahead of his 6 p.m. departure to San Diego. Two lines spilled into the airport lobby, he said. A third was reserved for passengers who had signed up to a trusted traveler program called T.S.A. PreCheck that allowed them speedier access.

A lot of people love PreCheck. People not only like speedier lines, but it also plays to the natural human tendency to appreciate special treatment. But as I have noted before, there are serious questions about where this background-check program is headed. What is now a whitelist for a select few may turn into the normal manner of travel, subjecting virtually every passenger to increasingly intrusive database checks, excluding only an unfortunate few who become effectively blacklisted. As I observed last year,

by manipulating the system and the lines, the TSA can push more and more people to seek refuge from poor treatment within a government background check program that demands an ever-increasing amount of information about our lives.

What does the TSA say is the solution to longer security lines? According to the Times,

Both the airlines and the T.S.A. said that one way to alleviate the longer wait is to sign up for PreCheck, which allows eligible passengers to go through the speedier lanes without having to take off their shoes and belts or remove laptops and other electronic devices from their bags.

Is the TSA intentionally making everybody stand in long lines in order to pressure passengers into “voluntarily” submitting to (and paying for) background checks? I don’t believe that 3-hour waits are part of an intentional PreCheck-boosting plot, and the agency has incentives to avoid political backlash as angry travelers call their members of Congress. The Times cites a shortage of TSA screeners, budget cuts, and a growing number of passengers as the explanation for the longer waits. Nevertheless, when conditions are bad it’s a natural question to ask. The agency has a stated goal of moving as many Americans as possible into PreCheck, and will no doubt make use of the current situation to increase pressure on people to do so, as we saw officials doing in their comments to the Times. The structural logic of the situation gives the TSA an incentive to make life difficult for those who resist joining their background check program. It’s a parallel to the airlines’ incentive to make seats as uncomfortable as possible for those lowly passengers who hold out paying fees for “upgrades.” As Tim Wu put it, “in order for fees to work, there needs be something worth paying to avoid.”