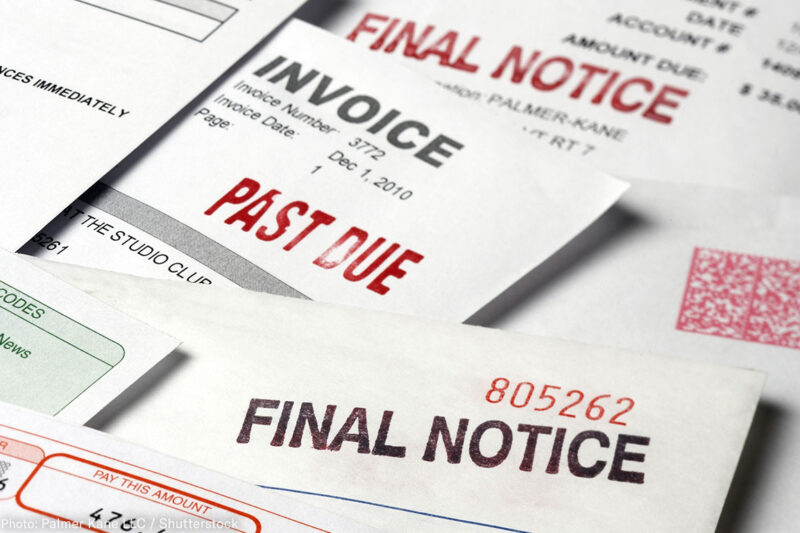 Lauren Smith (pseudonym) a mother of three in Indiana, had to file for bankruptcy because she couldn’t afford to repay her bills for treatment for thyroid cancer. And because she was unable to work, she had to stay with her parents in Florida while she recovered. She didn’t know that during that time, at the request of a debt collector seeking to collect outstanding medical bills, a small claims court judge had issued three warrants for her arrest. When she returned to Indiana, she was arrested by local sheriff’s deputies for the private debt she owed. Once at the jail, and being too sick to climb the stairs to the women’s section, she was held in a men’s mental health unit. Its glass walls allowed the male prisoners to watch everything she did, including using the toilet.

As in Smith’s case, and in thousands of other similar cases around the country, courts are issuing arrest warrants and serving as taxpayer-funded tools of the multi-billion-dollar debt collection industry.

Debtors’ prisons were abolished by Congress in 1833. They are often thought to be a relic of the Dickensian past. In reality, private debt collectors are using the courts to get debtors arrested and to terrorize them into paying, even when a debt is in dispute or when the debtor has no ability to pay.

Tens of thousands of arrest warrants are issued annually for people who fail to appear in court to deal with unpaid civil debt judgments. In investigating this issue for the new ACLU report, “A Pound of Flesh,” we examined more than 1,000 cases in 26 states, in which civil court judges issued arrest warrants for debtors. The debtors were often unaware that they had been sued. In many cases, they had not received notice to show up in court.

The process starts when a debt collector files a lawsuit, and it snowballs from there. Each year, collectors flood small-claims and other state courts with millions of suits seeking repayment. Many courts churn through collection suits with almost no scrutiny. Over 95 percent of debt collection suits end in favor of the collector, usually because alleged debtors do not or cannot mount a defense.

Then, with a judgment in hand, creditors can ask courts to require the person to show up in court for “judgment debtor examinations,” at which they are required to answer questions about their finances and assets. If the debtor does not appear for the exam, debt collectors can ask the judge to issue a civil warrant for the debtor’s arrest.

Our investigation found that many people missed their court dates because of work, childcare responsibilities, lack of transportation, physical disability, illness, or because they didn’t receive notification of the court date. We found two cases in which elderly women missed hearings because they were terminally ill. They died shortly after warrants were issued for their arrest. The threat of arrest is an incredibly powerful tactic for collectors. As one lawyer in Texas, who has sought arrests of student loan borrowers, has noted, “It’s easier to settle when the debtor is under arrest.”

Once arrested, a debtor may languish in jail for days until he can arrange to pay bail. Judges sometimes set bail at the exact amount of the judgment. And the bail money often is turned over to the debt collector or creditor as payment against the judgment.

Even when people aren’t arrested, warrants can cause long-lasting harm because they may be entered into background check databases, with serious consequences for future employment, housing applications, education opportunities, and access to security clearances.

Predatory debt collection companies are profiting from Americans who are trapped in debt and on the financial edge as a result of the loss of a job, illness, the death of a family member, or a divorce. The impact of abusive collection practices is particularly harmful to Black and Latino communities, which face longstanding racial and ethnic gaps in poverty and wealth.

There is scant protection from collection abuses under federal and state laws. And even when there are laws in place, abuses remain largely unchecked because regulators rarely intervene to stop them. Unless that changes, the most vulnerable debtors will continue to be victimized by predatory collectors and courts that serve them.