The Flint Water Crisis Isn’t Over 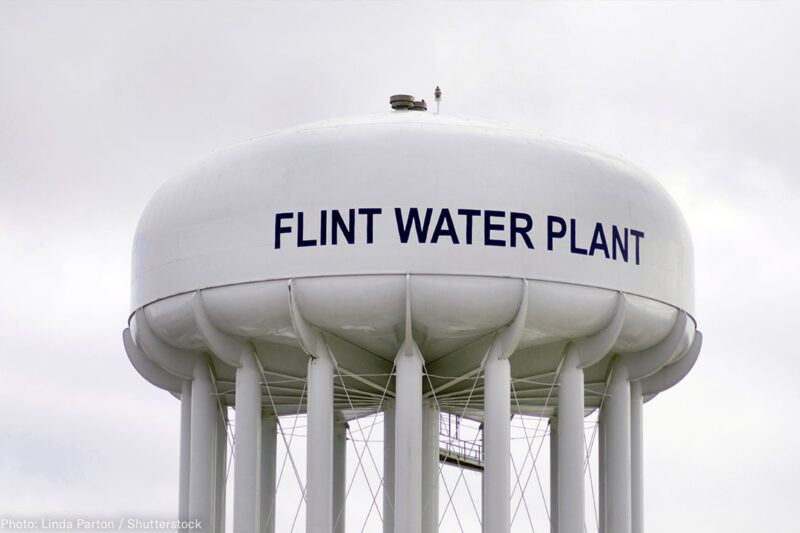 Four years to the day that the Flint water crisis began, there has been notable progress. Multiple tests, both independent and government-run, have shown average lead levels dropping back below the federal action level as a result of switching the city from the highly corrosive Flint River back to the safe and clean Detroit water system. In response to the testing, Gov. Rick Snyder recently announced that the state would no longer provide free bottled water to the city’s residents, but it would continue to provide water filters free of charge.

But many of the city’s residents don’t much believe the water’s safe. Who can blame them? Because of decisions made by state-appointed emergency managers and the Michigan Department of Environmental Quality, they were forced to use water laced with dangerously high levels of lead, a potent neurotoxin, and contaminated by bacteria that cause Legionnaires’ disease, which claimed at least 12 lives during the 18 months the city used the Flint River as its municipal water source. Despite the concerns voiced by residents and mounting scientific evidence that a massive problem existed, those same officials repeatedly offered assurances that the water was safe and attacked the credibility of those attempting to reveal the truth.

Gov. Snyder’s termination of the free bottled water program has met intense resistance. Flint mayor Karen Weaver has threatened legal action. Dr. Mona Hanna-Attisha, the Flint pediatrician who proved blood lead levels in children dramatically increased after the switch to the river, tweeted that bottled water should continue to be provided until all the city’s lead service lines are replaced. Residents agree, with many expressing concerns that unfiltered tap water can still pose a significant risk.

They are right. Lead testing done by the Michigan Department of Environmental Quality in February found 28 water samples in elementary schools that registered above the federal lead limit of 15 parts per billion.

But even that minimizes the real problem affecting Flint and its water supply. Because of the Flint water crisis, it’s now generally acknowledged that the federal lead limit is dangerously outdated. Lead is especially harmful to pregnant women, infants, and young children. Even at very low levels, lead can cause kids to lose IQ points and to develop learning disabilities and behavioral problems.

So it isn’t surprising that Flint’s mayor and the rest of the community remain skeptical of the governor’s declaration that the water is safe again — assurances they heard before from state officials who knew it wasn’t fit for consumption. In March 2015, Flint’s emergency manager refused to allow a return to Detroit’s system, saying there was no need because the water was “safe.” Then, a few months later, a spokesman for the Michigan Department of Environmental Quality insisted the residents of Flint should just “relax” because extensive testing showed federal lead standards were being met, despite warnings from scientists that those tests were dangerously flawed.

For families who got sick believing official lies about the water, there are few reasons for faith in government now, especially when some of the very officials accused of playing a role in the crisis — including two health officials charged with involuntary manslaughter — remain on the job, while taxpayers finance their defense. In all, 15 state and local officials were hit with felony charges, with four having taken plea deals in return for their cooperation with prosecutors.

Perhaps one of the biggest reasons why Flint residents don’t trust their government is the fact that the law — which the governor’s own task force acknowledged led to this nightmare — still hasn’t been repealed, or even altered at all.

In 2012, the legislature passed an emergency manager law, which enabled the state to take complete control of Flint governance because of financial woes. The emergency manager immediately, and undemocratically, implemented austerity measures. Most significantly, in an effort to save the city $5 million over two years, Flint’s water supply was switched from the relatively clean Lake Huron to the filthy Flint River.

There is no acceptable explanation as to why such an undeniably dangerous law remains in place and unchanged. It is telling, though, that the targets of this law have been cities and school districts which, like Flint, have majority African-American populations and high poverty rates.

The state and federal governments have already committed $450 million to address the aftermath of this man-made disaster. But that is only a fraction of what the true cost will eventually be. Multiple class action lawsuits and dozens of individual actions have been filed in an attempt to win some compensation for the damage done to residents of a city that is about 57 percent Black and has a poverty rate that hovers around 40 percent.

When everything’s accounted for, the emergency manager’s decision to save $5 million could easily end up costing taxpayers well over $1 billion. Just one of the many class action lawsuits filed on behalf of victims is seeking $722 million in damages.

If you ask the residents of Flint, they will tell you the crisis continues, regardless of what the governor says. How could they say otherwise when the financial costs keep rising, the health impacts continue to unfold, and the broken trust remains unhealed?

Curt Guyette, an investigative reporter for the ACLU of Michigan, played a pivotal role in helping expose the lead contamination of Flint’s water supply.