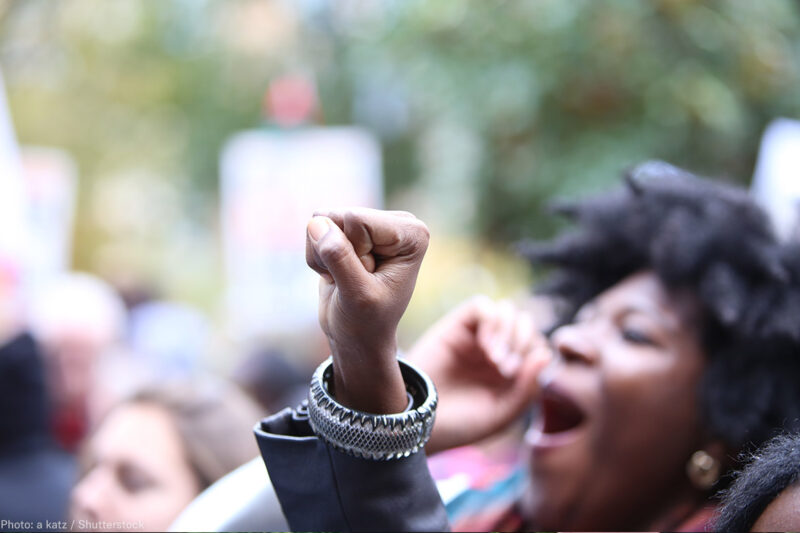 UPDATE: Please see a message from the author at the bottom of this article.

Freedom fighters around the globe commemorate July 13 as the day that three Black women helped give birth to a movement. In the five short years since #Black LivesMatter arrived on the scene — thanks to the creative genius of Patrisse Cullors, Alicia Garza, and Opal Tometti — the push for Black liberation from state-inflicted violence has evolved into one of the most influential social movements of the post-civil rights era.

Black Lives Matter has always been more of a human rights movement rather than a civil rights movement. BLM’s focus has been less about changing specific laws and more about fighting for a fundamental reordering of society wherein Black lives are free from systematic dehumanization. Still, the movement’s measurable impact on the political and legal landscape is undeniable.

What gets referred to as “the Black Lives Matter movement” is, in actuality, the collective labor of a wide range of Black liberation organizations, each which their own distinct histories. These organizations include groups like the Black Youth Project 100, the Dream Defenders, Assata’s Daughters, the St. Louis Action council, Millennial Activists United, and the Organization for Black Struggle, to name just a few.

Collectively, since 2013, these organizers have effected significant change locally and nationally, including the ousting of high-profile corrupt prosecutors. In Chicago, the labor of groups such as BYP100 and Assata’s Daughters, among others, led Anita Alvarez — who had inexplicably failed to charge police officers who shot at least 68 people to death — to lose her re-election bid for Cook County prosecutor. And in Florida, groups like The Dream Defenders and others helped end Angela Corey’s reign as a state attorney. Corey remains infamous for failing to convict Trayvon Martin’s killer George Zimmerman while prosecuting Marissa Alexander, a Black woman who didn’t hurt anyone when firing a warning shot at her abusive ex-husband.

The BLM movement’s work certainly doesn’t stop there. Students on the ground in Missouri, as part of the #ConcernedStudent1950 movement, helped lead to the resignation of the University of Missouri president over his failure to deal with racism on campus. BLM compelled Democrats to restructure their national platform to include issues such as criminal justice reform, and the movement contributed to the election of Black leftist organizers to public office, such as activist Chokwe Lumumba to mayor of Jackson, Mississippi.

The BLM movement’s unrelenting work on the issue of police corruption, helped incite the release of four unprecedented U.S. Department of Justice reports that confirm the widespread presence of police corruption in Baltimore, Chicago, Ferguson, and Cleveland. Moreover, the Movement for Black Lives’ publication of a watershed multi-agenda policy platform — authored by over 50 black-centered organizations — laid bare the expansive policy goals of the movement. The fact that these accomplishments have happened so quickly is an extraordinary achievement in and of itself.

Moreover, the broader cultural impact of BLM as a movement has been immeasurably expansive. BLM will forever be remembered as the movement responsible for popularizing what has now become an indispensable tool in 21st-century organizing efforts: the phenomenon that scholars refer to as “mediated mobilization.” By using the tools of social media, BLM was the first U.S. social movement in history to successfully use the internet as a mass mobilization device. The recent successes of movements, such as #MeToo, #NeverAgain, and #TimesUp, would be inconceivable had it not been for the groundwork that #BlackLivesMatter laid.

Many have suggested, erroneously, that the BLM movement has “quieted” down in the age of Trump. Nothing could be further from the truth. If anything the opposite is true: BLM is stronger, larger, and more global now than ever before. The success of initiatives such as Alicia Garza’s Black Census Project — the largest national survey focusing on U.S. black lives in over 150 years — and Patrisse Cullor’s launch of the grassroots effort Dignity and Power Now in support of incarcerated people, both exemplify the BLM movement’s continued impact, particularly in local communities.

The idea that BLM is in a “decline” stage is false. Instead, what is true is that American mainstream media has been much less willing to actually cover the concerns of the BLM in part because it has been consumed by the daily catastrophes of the Trump presidency. Nonetheless, it would be a mistake to assume that BLM is “dwindling” away simply because the cameras are no longer present. The revolution is still happening — it is just not being televised. All throughout the country, BLM organizers are at work in their local communities feverishly fighting for change and relentlessly speaking truth to power. For instance, The Dream Defenders in Florida just released their visionary project “The Freedom Papers,” and BYP100 just celebrated its five-year anniversary.

Ironically, many of the debates that have come to define the age of Trump, such as the immigration debate, are arguably indirectly influenced by BLM. A notable example: Recently, some congressional Democrats have called for the abolition of the Immigration and Customs Enforcement, which has been violating the rights of undocumented immigrants. What has been missing in much of the mainstream coverage of the ICE debate is an acknowledgment of how the democratic left’s radicalization would not have been possible without the efforts of Black radical grassroots social movements, such as BLM.

Indeed, long before congressional Democrats dared to call for the abolition of ICE, #blacklivesmatter activists pioneered the call for an end of modern policing in America. The language of “abolition” comes directly from the work of grassroots activists, such as those in the Black Lives Matter Global Network. Their work helped to revive a long black radical tradition of engaging the rhetoric of abolitionism.

We literally would not even be using the word “abolition” — let alone embracing it as a framework — had it not been for the labor of BLM activists. The fact that Democrats are gradually calling for the abolition of ICE is a testimony to the continued impact of BLM as a social movement.

Frank Leon Roberts is the founder of the Black Lives Matter Syllabus and teaches at New York University.