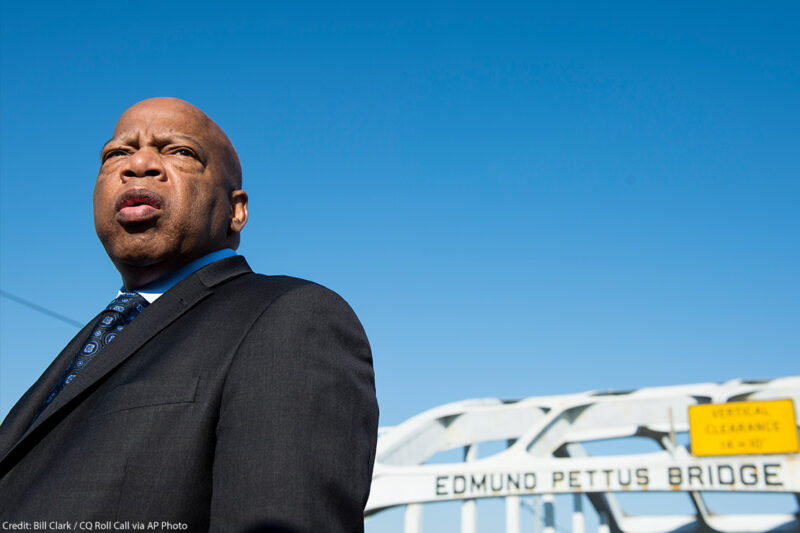 John Lewis will continue to be a force in all of our lives, and his legacy is a reminder that the arc of justice does not bend easily — and doesn’t always stay bent.

The first time I didn’t meet John Lewis was at a 2010 gala dinner celebrating the 90th anniversary of the ACLU of Massachusetts.

As President of the ACLU, I had been invited to present a civil liberties award to Lewis, who had agreed to accept the award and give the keynote address. On the train to Boston for the dinner, I received an email from the affiliate’s executive director, Carol Rose, telling me that Lewis would not be able to attend the dinner after all and asking if I would deliver the keynote speech instead.

It was easy enough for me to choose a subject: John Lewis, whose reason for not attending the dinner was that he needed to stay at his post in the House of Representatives to vote for the repeal of the Don’t Ask Don’t Tell law. Lewis recorded a video apologizing for his absence. The audience not only forgave him, but honored his decision to act rather than speak as a reflection of his abiding commitment to the fight for equality. Like the ACLU, Lewis connected the dots between racial equality and LGBTQ equality: No one should suffer discrimination on the basis of who they are. Just as he had in the 1960s, he devoted himself daily to doing everything he could to make that aspiration a reality.

The second time I didn’t meet John Lewis was in the Capitol Building, in February 2013. After attending a meeting on behalf of the ACLU, I observed the crowd gathered for the installation of a statue of civil rights icon Rosa Parks. I learned later from colleagues that Lewis was not present for that occasion as, again, he had more urgent business. He was across the street at the Supreme Court, watching the oral argument in the case of Shelby County v. Holder.

Rather than celebrating a symbol of how far the country had come in the fight against racism, he chose to witness the latest chapter in Alabama’s campaign for retrogression. Alabama was attacking a central provision of the Voting Rights Act of 1965, the essential civil rights law he and his colleagues had forged through their persistence and courage — even through their brutal treatment on the now-infamous bridge in Selma, Alabama. As Lewis must have feared, the court chose states’ rights over voting rights and eviscerated that hard-won landmark law. Lewis’s response was to stay at his post in the House and keep fighting.

I finally met Lewis quite by accident in a parking lot at the Atlanta airport. I was heading for a flight home after chairing a national ACLU board meeting when a colleague noticed Lewis exiting the building we were about to enter, heading for a car at the curb. Lewis was more than gracious in delaying the final leg of his trip home in order to chat with our group of civil libertarians from around the country, and kindly posed for numerous photos and selfies. On learning about our ACLU connection, he expressed his admiration of our work for civil liberties as we expressed our awe of his own.

Lewis never strayed far from the nexus of the fight against injustice — whether in the streets, the courts, or Congress. His absence in one room, I found, guaranteed his presence in another, where a more consequential fight for equality was usually taking place.

John Lewis was and will continue to be a force in all of our lives, reminding us that the arc of justice does not bend easily — and doesn’t always stay bent. As ACLU founder Roger Baldwin memorably said, no civil liberties battle ever remains won. We honor John Lewis best not by our words, but by recognizing that awards, obituaries, and commemoration ceremonies can fuel but must not distract from our ongoing actions to preserve and promote equality for all.