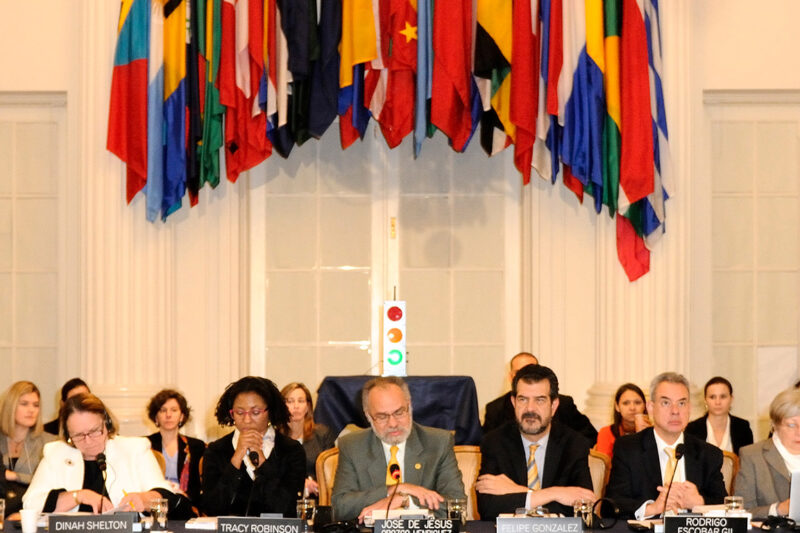 It is common for nations where mass atrocities have taken place to engage in the process of reparation and repair. This process happened in Germany after the Holocaust, South Africa after apartheid, and here in the United States, forty years after the internment of Japanese-Americans during World War II. As a result, international human rights bodies have sought to lend their expertise to the process, often by holding hearings and publishing international guidelines on the steps necessary to effectively administer a program for reparations.

Now is time for those same human rights bodies to add their expertise to the ongoing conversation around reparations for descendants of African slaves in the United States. That’s the fundamental assumption that guided our decision to request today’s hearing before the Inter-American Commission on Human Rights and other forms of structural racial discrimination, in the United States.

The Inter-American Commission on Human Rights, founded in 1959 by nations across the Western Hemisphere, has specifically been involved in such work, holding hearings and publishing international guidelines on the steps necessary to effectively administer a program for reparations. It did so after mass human rights violations in Columbia and Chile, leading to both countries’ implementation of these initiatives. In March, the commission released “Police Violence Against Afro-descendants in the United States,” a report that recommended reparations here in the United States to address the structure of the racial discrimination that underlies our current system of policing.

Toward the end of the event launching that report at Howard Law School, vice president of the commission Margarette McCauley, addressed the audience, reminding us that the commission has a long history of recommending reparations for severe violations of human rights. In fact, reparations programs recommended by the commission often call for far more than simply eliminating the consequences of human rights violations. Often, the recommendations emphasize meaningful restitution, rehabilitation and compensation. This means restoring community cohesion and improving the social circumstances of affected communities.

That commission suggested that the United States respond to the crisis elevated by the Black Lives Matter movement by “undertaking studies with the goal of creating guidelines for the reparation of historic and structural discrimination” and “provide appropriate reparation to those affected by the racially disparate impact of federal, state, and local laws and policies.” We should not have been surprised—the United Nations Working Group of Experts on People of African Descent issued a similar recommendation in 2016.

Closer to home, Congresswoman Sheila Jackson Lee’s (D-Texas) proposal for H.R 40 would bring the U.S. in line with both international law and practice in the issuance of reparations for human rights violations. The international human rights community has taken the position that reparations are the right remedy for racial injustice in the United States. It’s time that our country recognizes that.

By approaching the reparations debate using a human rights lens, we sidestep the limited vision of those with shortsighted domestic imaginations. For example, Senate Majority Leader Mitch McConnell (R-Ky.) recently complained that slavery was too long ago and that people alive today are not responsible for slavery.

A human rights lens shows that McConnell’s arguments are far too constricted, both in defining the issues and in considering solutions. No international body has suggested that we limit reparations to the question of enslavement. Indeed, while the Inter-American Commission focused on police violence, others have focused on Jim Crow, lynching, segregation, and other methods of racial terror that people alive today have and continue to experience. These questions have not proved to be insurmountable in other countries and are not unconquerable here in the United States.

Take Canada, for instance. The racist practice of removing indigenous Canadian children from their families and placing them in schools that prohibited their native languages and cultural practices began in the 19th century. In 1991, the Canadian government established a special commission designed to explore the relationship between aboriginal peoples and the government. Based on that commission’s recommendations and in conjunction with work done by the United Nations and other human rights advocates, the government issued an apology and, as of 2016, has provided approximately $2 billion federal dollars for a truth and reconciliation commission, as well as financial compensation for survivors under the Indian Residential Schools Settlement Agreement.

Our problems and their solutions are more similar than one would think. One public school reform group found that there is presently a $23 billion gap in funding between white and nonwhite school districts. A reparations fund could be used to close that gap and help to end the school-to-prison pipeline in America’s public schools.

The upcoming IACHR hearing offers opportunities to learn about additional comparative examples of reparations efforts. We should use the information gleaned from these hearings to inform the current domestic debate on how to remedy our country’s history of racial injustice.