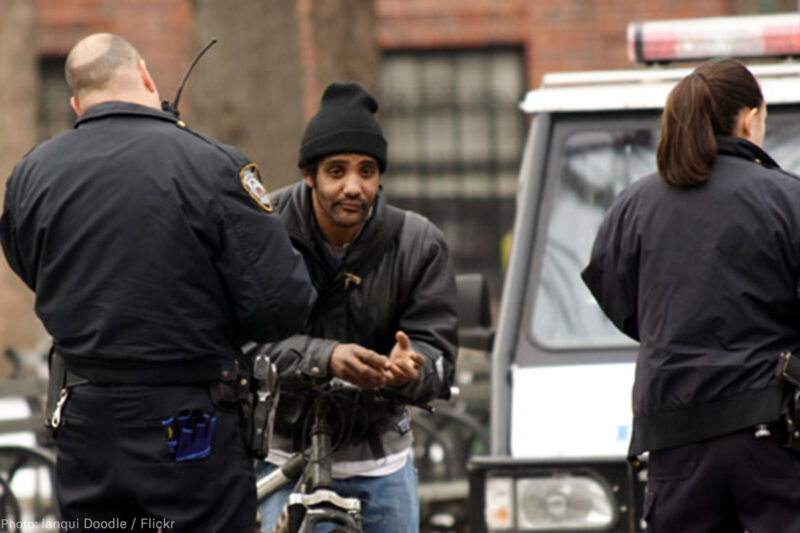 Jeffery Robinson, Executive Director, The Who We Are Project
Share This Page
May 22, 2018

Attorney General Jeff Sessions has claimed that the settlement of a lawsuit brought by the ACLU of Illinois against the Chicago Police Department resulted in approximately 236 additional victims killed and over 1,100 additional shootings in 2016 alone. This represents a new low for Sessions. He is wrong on the facts — there was no ACLU lawsuit — and wrong on what is required by the Constitution.

This is not the first time Sessions has been wrong on the facts and argued for bias-filled unconstitutional policies that have been abject failures. He said nothing when the president expressly encouraged police officers not to worry about injuring suspects during arrests. In one of his first actions, he sought to back out of a consent decree imposed on the Baltimore Police Department, but the judge in the case refused his request. He has opened no investigations of systemic policing abuse since taking office, even refusing to act on a scathing report issued by the Justice Department on the Chicago police.

The ACLU of Illinois did not sue the Chicago Police Department. A lawsuit was not necessary. It wrote a report, backed up by the department’s own data, demonstrating that its stop-and-frisk policy was unconstitutional and ineffective. The policy was characterized by random stops conducted under circumstances where there was no reasonable suspicion that any criminal activity was occurring or had occurred with respect to the person or people being stopped.

Chicagoans under this policy were stopped more than four times as much as New Yorkers before New York altered its stop-and-frisk practices. In 2014, more than 700,000 stops in Chicago did not result in a person being charged with a crime. There were a total of 129,166 arrests that year.

Even if one assumes all arrests in 2014 were done during a stop-and-frisk encounter — rather than, say, based on detective work, on-view crimes, or 911 calls — more than 84 percent of the stops were of completely innocent people. The Chicago police, faced with overwhelming evidence of unconstitutional conduct, entered a voluntary agreement in August 2015 that allowed them to do constitutional stop and frisk (based on reasonable suspicion) but required them to respect the rights of Black and brown Chicagoans by banning the use of random, racially biased practices.

Sessions, however, refuses to accept this reality. Instead, he has claimed that the agreement caused 236 murders. He points to a journal article written by Paul Cassell, a former federal judge, and Richard Fowles, that asserts the reductions in stop-and-frisk encounters from 40,000 a month to 10,000 a month caused the additional murders in 2016. While the report accurately states the reduced number of stop-and-frisk encounters and the spike in murders in 2016, it provides no causal link between the two events.

The authors essentially suggest that a huge number of random stops will reduce crime because no one will ever know when they might be stopped and, therefore, will not carry weapons. Apparently, they are fine with randomly stopping hundreds of thousands of people, a practice with a greater than 84 percent error rate. It is astounding that a former federal judge and the sitting attorney general would advocate a method of policing that is blatantly unconstitutional. Their lack of respect for the law is glaring and alarming, but it’s nothing new from the Trump administration.

If the authors are correct, one would expect that the police took a lot more guns off the street under the old stop-and-frisk policy. But the stats show that less than 5,000 guns were seized in 2014, and less than 5,000 in 2015. After the agreement went into effect, gun seizures went up, with 5,114 in 2016 and 7,684 in 2017. More guns were seized when police limited their stops to those people who were doing something that was reasonably characterized as suspicious. Maybe part of the reason more guns were seized is that officers saw more suspicious behavior because they were not otherwise occupied stopping and frisking innocent people.

And what about the experience in other cities?

When New York changed its stop-and frisk-policies, murders stayed the same or dropped. The authors of the study say this is an anomaly, but they ignore Seattle, Cleveland, Boston, Newark, and Philadelphia — cities that had the same experience as New York, where ending the practice of stopping thousands of people who were doing nothing suspicious did not cause more homicides.

Why would Sessions make such an accusation without sound evidence? He is clearly trying to defend a retrograde view of policing. He has nothing to offer when it comes to thoughtful, evidence-based policies that support effective, bias-free, constitutional policing. He is desperate for evidence to defend the indefensible, and here he has resorted to a report that is long on opinions but short on factual analysis. And he forgets that our Constitution is a set of guiding principles, not something to get around.