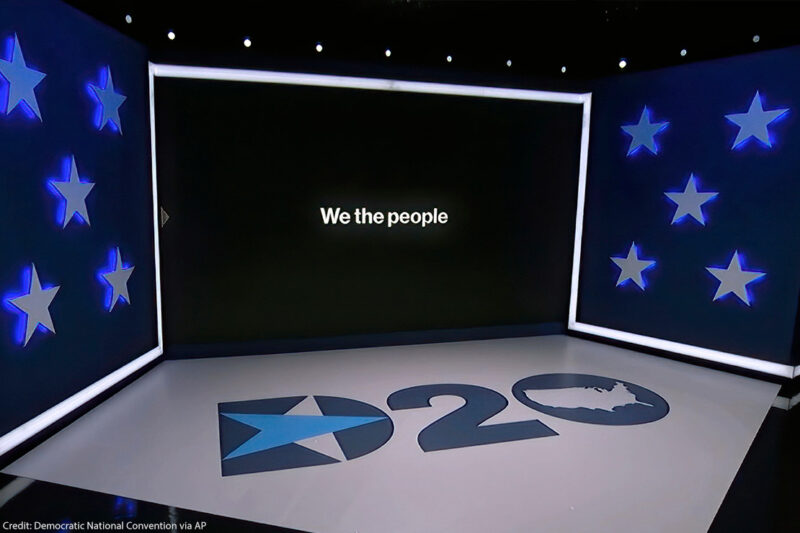 The Democratic platform fails in some respects to meet the demands of the moment and misses the opportunity to provide a home for the millions of Americans looking for transformational change of a criminal legal system rooted in white supremacy and racism.

As Democrats gather this week to nominate their presidential candidate, they will also adopt the party’s proposed platform. On criminal justice reform, the platform continues to move the party away from its harmful tough-on-crime past. But it also misses an opportunity to respond to Americans’ desire to seek transformational changes in the criminal legal system.

For the past 60 years, presidential politics have played an outsized role in criminal justice policy-setting, despite this issue being largely the domain of states and localities. Of the 2.3 million people incarcerated in the United States, 90 percent are under state or local jurisdiction.

Barry Goldwater was the first national politician to focus on criminal justice issues as part of a presidential election, invoking tough-on-crime rhetoric and racist attacks on the civil rights movement. The five-term U.S. senator from Arizona was the 1964 Republican presidential nominee and ran on a law-and-order platform that denounced the civil rights movement as lawless and equated it with criminal behavior. He lost the 1964 presidential election, but his candidacy provided a boost for future law-and-order candidates.

In the 1968 elections, Richard Nixon made law-and-order a central theme of his winning campaign, dedicating 17 speeches to the topic. He deployed the “Southern strategy” to appeal directly to Southern white working-class voters who opposed racial desegregation and the advances being made by the civil rights movement.

It was during the Reagan administration that the full development of the law-and-order strategy began to take hold. While Nixon called for a war on drugs in 1971, President Ronald Reagan brought Frankenstein to life — dramatically increasing law enforcement budgets and slashing funding for drug treatment, prevention, and education.

By the early 1990s, Democratic politicians wanted to wrest control of criminal justice issues and began a bidding war with Republicans on who could impose harsher penalties. In 1992, presidential candidate Bill Clinton vowed that he would never permit any Republican to be perceived as tougher on crime. Weeks before the New Hampshire primary, he flew home to Arkansas to oversee the execution of Ricky Ray Rector, who was mentally incapacitated. During Clinton’s tenure, he slashed funding for public housing by 61 percent while boosting corrections funding by 171 percent, made it easier for public housing to exclude anyone with a criminal history, and signed into law the infamous 1994 Crime Bill.

“The Democratic Party under President Clinton is putting more police on the streets and tougher penalties on the books … President Clinton made three-strikes-you’re-out the law of the land, to ensure that the most dangerous criminals go to jail for life, with no chance of parole. We established the death penalty for nearly 60 violent crimes … We provided almost $8 billion in new funding to help states build new prison cells … [W]hen young people commit serious violent crimes, they should be prosecuted like adults. We established boot camps for young non-violent offenders.”

It wasn’t until 2008 that the tone of the Democratic Party platform began to change, and by 2016, in response to the killing of Freddie Grey at the hands of Baltimore police and other high profile instances of police violence, Democrats called for “reforming our criminal justice system and ending mass incarceration.”

Which brings us to this year’s proposed platform. It blasts police violence and private prisons and calls for a reduction in the nation’s incarceration rate. It supports front-end reforms like tackling the school-to-prison pipeline, fighting mandatory minimum laws and ending cash bail, as well as back-end reforms, such as reentry services for people leaving prison and increasing the use of presidential clemency powers to release people serving long sentences.

Compared to past DNC platforms, this year’s proposed platform represents a dramatic shift from the 1990s. The Democratic Party has reversed course on certain positions, now saying it is “unjust — and unjustifiable — to punish children and teenagers as harshly as adults,” the opposite of the party’s 1996 platform. This year’s proposed platform also responds to the Black Lives Matter movement by recognizing systemic racism and calling for a dramatic change in the legal standard for police use of deadly force. And it has reversed course on the death penalty, now opposing it.

But even while recognizing this evolution of the platform and the challenges of finding consensus among a party with diverse viewpoints, it is still disappointing to see the platform fail in some respects to meet the demands of the moment.

For example, the proposed Democratic platform calls for an end to the “failed war on drugs, which has imprisoned millions of Americans,” yet fails to support policies that would actually end this failed war that has disproportionately harmed Black and Brown communities. Not only does the platform neglect to call for the decriminalization of all drug possession, which would strike a genuine blow to the war on drugs, it fails to even support marijuana legalization, which is supported by a large majority of Americans. The call to end the war on drugs is meaningless without these basic proposals.

Moreover, on policing, the platform is silent on the call to slash police budgets and redirect those resources into alternatives to policing, and to reinvest in communities historically targeted by the police. Instead, the platform mostly continues to tout procedural reforms and calls for greater transparency and accountability. These are important reforms, but they miss the mark on what millions of people are marching on the streets to demand — a fundamental reorientation of public safety, divesting resources away from police and into alternatives to police and towards resources that will build long-term safety and stability.

Finally, even though during the campaign trail candidate Joe Biden and a dozen other candidates committed to the ACLU to cut incarceration rates by 50 percent if they were to become president, the Democratic Party platform is now silent on setting this or any other concrete reduction goal.

The Democratic Party has a terrible track record on criminal justice issues. It has now clearly broken away from this tarnished past, and the party platform recognizes the destructive crisis of mass incarceration. Yet the party still fails to recognize the need for transformational change, and until it does so, it will miss providing a home for the millions of Americans who are tired of tinkering around the edges and are looking for transformational change of a criminal legal system rooted in white supremacy and racism.