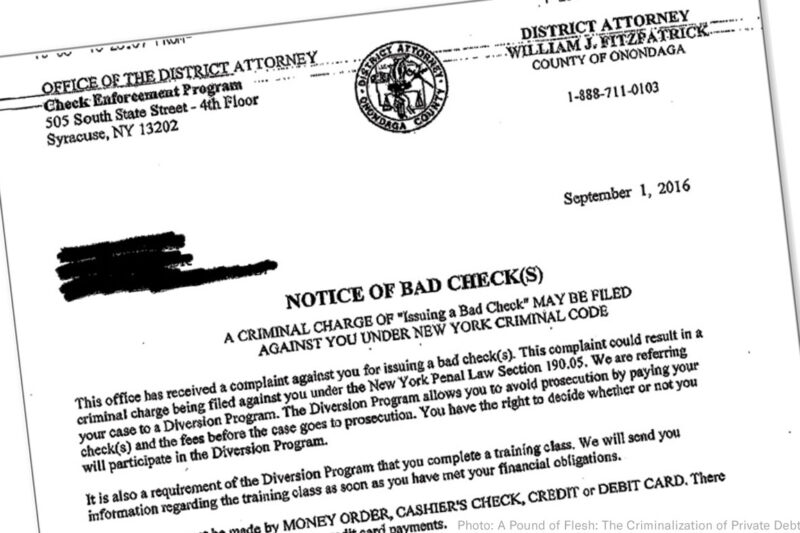 When Roz, a mother raising three children with special needs on a razor-thin budget in Washington, wrote a check for $41.19 to Goodwill to buy secondhand clothing for her children, she had no idea it would lead to threats of criminal prosecution and jail. But that’s exactly what happened when the check bounced, and her inability to pay a bill led to her being sucked into the criminal justice system.

That the check bounced because of a banking mix-up didn’t matter. Roz received a letter in the mail that looked like it had been sent by her local prosecutor. The letter stated she had been accused of the crime of issuing a worthless check and she had to pay the amount of the check plus $185 in fees within 10 days “to avoid the possibility of criminal charges being filed.”

The threats for failure of nonpayment did not end there.

In the ensuing weeks, the letters and calls kept coming, demanding Roz pay more even after she sent a money order for $85. She was terrified. She did not want to be prosecuted. So she ultimately paid the $41 plus nearly $220 in fees, a staggering amount for a mother on a budget who was already struggling to make ends meet.

Moreover, there was no evidence that the prosecutor reviewed any evidence related to her bounced check or that she would have been prosecuted if she didn’t pay the fees.

Every state has criminal laws dealing with bad or bounced checks and prosecutors are required to review these cases to determine if they are subject to prosecution. But in many places, district attorneys seeking to get these cases off their desks have decided to hand over enforcement to private collection companies even when no crime has been committed. More than 200 local district attorneys’ offices have entered into partnerships with private debt collection companies like Bounceback that get people to pay. Some companies are allowed to use the district attorney’s letterhead to threaten people with criminal prosecution, jail and fines.

It’s estimated that more than one million consumers who bounce checks each year receive letters threatening criminal prosecution and jail time. The Consumer Financial Protection Bureau has found that less than 1 percent of cases handled by the largest of these check collection companies were examined by a prosecutor for possible criminal prosecution.

Worse still, the companies collect not only restitution for the unpaid check, but they also tack on a variety of fees, including fees to attend a diversion program run by these same companies. The diversion programs are usually a class on financial responsibility, which may cost the check writer more than $200 – sometimes far more than the value of the bounced check. The programs are required by the companies, not the prosecutor, and sometimes the companies don’t even bother to schedule the class once the consumer has paid the fees.

Some portion of these fees, depending on the contract, is then funneled to the district attorneys’ offices. For example, as of November 2015, the district attorney’s office in Orange County, California, has received $2.54 million in total revenue from its check collection program operated by the for-profit company CorrectiveSolutions.

Few, if any, of the bounced checks that result in threatening collection letters qualify for criminal charges. We found cases in which threatening letters were sent for bounced checks as low as $2, clearly too low to meet the criteria for criminal prosecution, usually more than $50 to $2,000, depending on the state. One lawyer who has been fighting these check collection tactics in the courts since 2001 told the ACLU he has documented over 10,000 checks for under $10 that triggered letters threatening consumers with jail, including bounced checks for as little as one penny.

Read the report on the criminalization of private debt

These contracts between check collection companies and prosecutors’ offices violate standards of professional conduct and the due process rights of consumers, and in most instances, prey on the most vulnerable. District attorneys can terminate these contracts, and they should do so immediately. More than 1,000 local D.A.s are up for election in 2018. Anyone seeking these elected offices should commit to ending these abusive contracts, and voters should pay attention to where these candidates stand on this issue when casting their votes later this year.