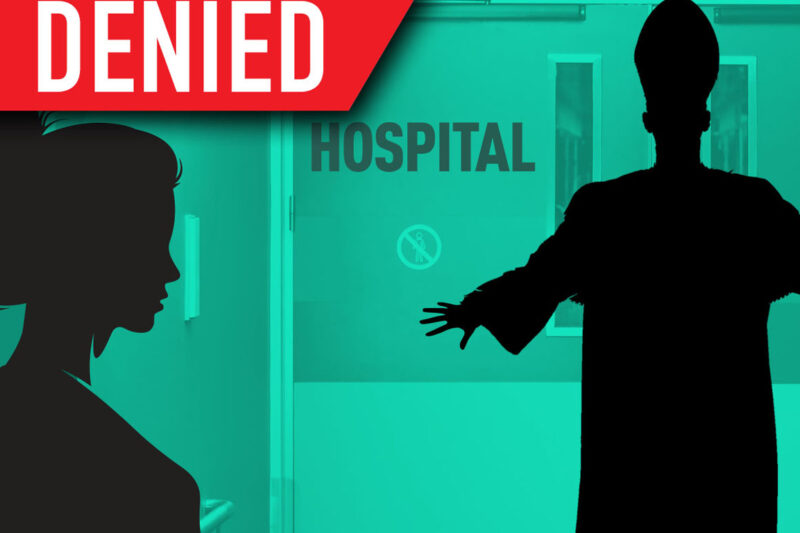 Today we filed a lawsuit challenging Dignity Health’s use of religious directives to deny basic reproductive health care to its patients. Filed on behalf of patient Rebecca Chamorro and Physicians for Reproductive Health, the suit argues that withholding pregnancy-related care for reasons other than medical considerations is illegal in California.

Rebecca lives in Redding and is a patient at Dignity Health’s Mercy Medical Center, the only hospital in Redding with a labor and delivery ward. She decided with her doctor that she would get a tubal ligation (otherwise known as getting your tubes tied) during her scheduled C-section in late January. But the hospital refused her doctor’s request to perform the procedure, citing religious directives written by the United States Conference of Catholic Bishops that classify sterilization procedures as “intrinsically evil.” For Rebecca, there are no hospitals within a 70-mile radius that have birthing facilities and do not follow these directives.

The refusal of hospitals to allow doctors to perform basic health procedures based solely on religious doctrine presents a real threat to a woman’s ability to access health care. Patients seeking medical care from public institutions should not have to worry that religious doctrine rather than medical judgment will dictate what care they receive.

In addition to the lawsuit, we’re also filing an emergency motion asking the court to prevent Dignity Health from using the religious directives to interfere with Rebecca’s care so that her doctor can perform the procedure during her scheduled delivery in January. A hearing on this motion is scheduled for Jan. 5 at 11 am in San Francisco Superior Court.

Tubal ligation, known familiarly as “getting one’s tubes tied,” is the contraceptive method of choice for more than 30 percent of U.S. married women of reproductive age. An estimated 600,000 women undergo this procedure each year. For women who want a tubal ligation, performing it immediately following delivery (or postpartum) is best practice and aligns with medical standards of care.

In August, we sent a demand letter on behalf of Rachel Miller, another Redding woman who decided with her doctor to have a tubal ligation following the C-section birth of her second child. Under the threat of a lawsuit, the hospital allowed Miller to have the procedure.

A similar demand letter was sent Dec. 2 on behalf of Rebecca, but Dignity Health has to date refused to authorize her doctor to perform the tubal ligation.