How My Question Helped Move Joe Biden on Abortion Access 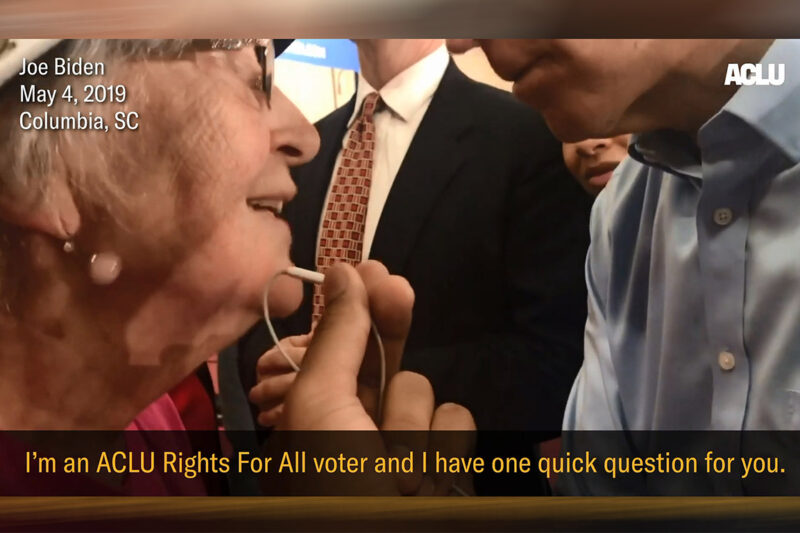 My name is Nina Grey. I’m a 77-year-old retired Unitarian Universalist minister, and I was the voter who asked Joe Biden the question, “Will you commit to abolishing the Hyde Amendment, which hurts poor women and women of color?” As a volunteer with the ACLU’s Rights for All campaign in South Carolina, we have been asking all the candidates where they stand on doing away with the policy, which bans coverage of abortion through Medicaid with very narrow exceptions.

As I set up close to the rope line in hopes of getting his attention, I was excited when the former vice president came over and thrilled to hear his emphatic “yes!” when I asked if he supported ending Hyde. “It can’t stay,” he said. Biden had previously supported this discriminatory policy, and I was glad to hear him express support for ending it. But one month later, his campaign put out a statement saying that he wanted to keep Hyde.

Immediately, footage of our exchange went viral, and, in the end, Biden did the right thing and spoke out in favor of lifting the ban. 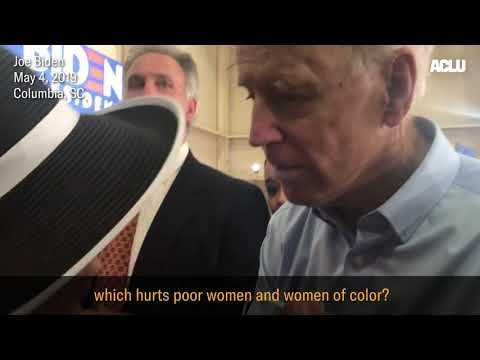 As a minister, I have spent years fighting to protect the rights of immigrants, advocating for the LGBT community, and protesting attacks on reproductive freedom. I have worked with groups like Planned Parenthood to oppose efforts to curtail access to abortion, including the new anti-choice bills taken up here in South Carolina. With the Rights for All campaign, I am continuing my work as an activist by defending civil liberties and holding our public officials to account, especially around the Hyde Amendment.

Let me share why I believe the repeal of the Hyde Amendment is so important. Hyde was designed in the 1970s to restrict the ability of poor women enrolled in Medicaid to exercise their right to an abortion simply because of their income. It has particularly impacted women of color, who are disproportionately represented among Medicaid enrollees. Coupled with the more than 400 restrictions on abortion that states have adopted since 2011, which shut down clinics and create medically unnecessary obstacles for patients, the Hyde Amendment has meant that the constitutionally protected right to abortion is a reality only for those who can afford it. We need a president who will lead the fight to ensure that everyone can access abortion care, no matter where they live or how much they make, by ending abortion coverage restrictions like the Hyde Amendment.

The Rights for All campaign seeks to elevate civil liberties issues like abortion rights to a level of importance where they simply cannot be ignored, and Rights for All volunteers have become an unmistakable presence at campaign events, asking candidates where they stand on topics like ending mass incarceration, dismantling immigrant detention, and guaranteeing voting rights.

While witnessing the attacks on civil liberties in South Carolina and throughout the country, I am often reminded of the need to stay engaged and work in community with others to remind us of why we are in this fight. I didn’t get involved for myself, but for my granddaughter, our Constitution, and our democracy. As one of many Rights for All volunteers, I know we are doing our part by speaking directly to those seeking to lead our country and making sure that our next president is a champion for civil liberties and civil rights.