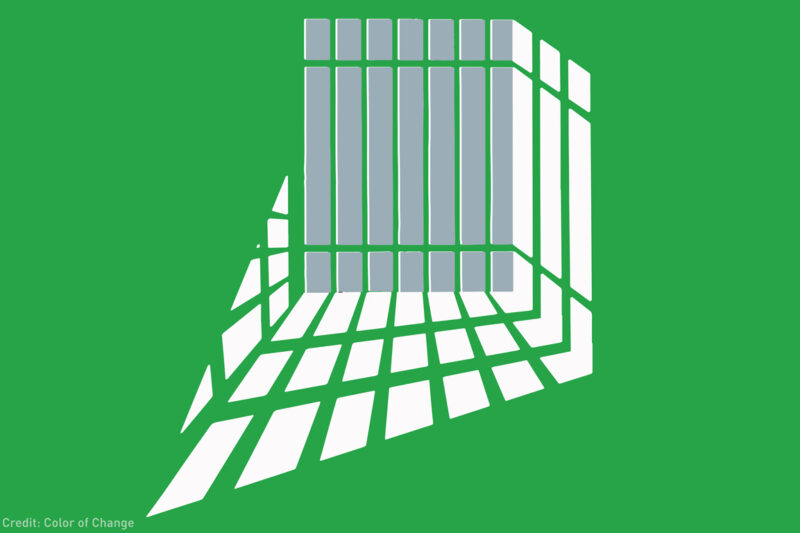 Eleven years ago, San Diego, California, resident Melodie Henderson was arrested for assault after a minor altercation with a former coworker. Her bail was set at $50,000. This was before a judge ever laid eyes on her.

Although she was employed, there was just no way Melodie would ever have been able to come up with the $50,000 she needed to post bail to be released while she fought her case in court. Her other option was to pay a bail bonds company a 10% nonrefundable fee, but with a $50,000 bail amount, it would be hard for her to come up with the $5,000 on her own. Of course there was third option: to sit in jail while her case moved forward, but that wasn’t an option at all. She was in her early 20s, working and going to school part time, while also taking care of her 6-year-old sister and her grandmother, who was undergoing chemotherapy. Her bail felt like punishment before she even went to trial.

So it was her grandparents, who were on a fixed monthly income, who faced the decision to either go into debt to get Melodie released as her case moved forward or let her sit in jail, lose her job, and fight her case while she was in custody.

They decided to go through a bail bonds company to get Melodie out. The result was a financial burden no person or their family should bear: making a hefty down payment and then monthly payments to the bail bonds company — with interest. Had her and her family been wealthy and able to afford the entire $50,000 bail amount up front, things would have been much different. They would have eventually gotten all their money back (minus some fees) from the courts. That was not the case with the bail bonds company.

Even after her case was resolved and she completed community service and served a period of probation, her and her family’s debt to the bail bonds industry continued. Sadly, she isn’t alone.

As detailed in a report released today by Color Of Change and the American Civil Liberties Union’s Campaign for Smart Justice, every year millions of people are locked up in jail nationwide before they even get their day in court — all because they cannot afford to post bail and buy their freedom.

Some, like Melodie, are able to pool resources together, often with the help of family members, to pay the nonrefundable 10 percent fee for-profit bail companies typically charge. This is a hardship masquerading as a tool of justice.

The report, “Selling Off Our Freedom: How Insurance Corporations Have Taken Over Our Bail System,” exposes insurance corporations’ hand in creating an unnecessary and largely unaccountable $2 billion bail industry that ensnares thousands of people in detention or debt – or both. Insurers, including corporations like Bail USA, Seneca Insurance, and United States Surety, collect around 10 percent of the premium bail agents charge families.

Like in many states, California’s money bail system – where low to moderate-income people are unable to post money bail and have to either sit in jail or pay a bail bonds company a nonrefundable fee for their freedom – prioritizes bail insurance corporations’ profits over justice. While people are trapped in jail or debt, these conglomerates reap large benefits at low risk, all the while evading oversight.

Their evasion is purposeful. The bail bonds industry portrays itself as small, “mom and pop” bail bonds agencies that secure release from jail for a nonrefundable fee. In reality, multinational insurance corporations dominate the industry, underwriting each bond. In fact, fewer than 10 large insurers underwrite a majority of the approximately $14 billion in bail bonds issued in the United States each year. This money bail system allows corporate insurers to operate with little risk, meaning the industry profits even when its customers do not show up for court. It is a win-win for them. It is a lose-lose for justice.

People like Melodie spend years trying to pay back the bail bonds company to get back on track. They are forced to put their lives on hold, let bills go unpaid, and take severe hits to their credit. Many are people already struggling to make ends meet, and many are people of color.

This is not a system of justice. It is a system of corporate greed that negatively impacts millions of people, especially low-income families and communities of color.

Now 32 years old, Melodie is a small business owner, mother, and caretaker of her two younger sisters. The road for her was long and difficult. Yet her story could have been much different if she hadn’t been expected to buy her freedom. She hopes people understand that California’s current money bail system doesn’t promote justice and public safety but rather injustice and harm to the people, families, and communities ensnared by it.

Fortunately, California lawmakers introduced The California Money Bail Reform Act of 2017 (AB 42 and SB 10), two identical bills that will truly protect the wellbeing and safety of communities. The bills will reduce the number of people locked up because they are unable to pay to get out of jail while their cases move forward. The bills will also prioritize services to help people make their court appearances and curb the state’s overreliance on the current money bail system. They build upon commonsense solutions adopted in other jurisdictions that have significantly reduced their use of commercial bail, such as Kentucky; Santa Clara, California; and Washington, D.C.

California needs to pass this legislation in the name of justice. And the rest of the nation should follow suit with similar state-based legislation that puts the economic security, wellbeing, and safety of our communities before bail insurance companies’ profits. We need to create a system of justice that works for everyone.