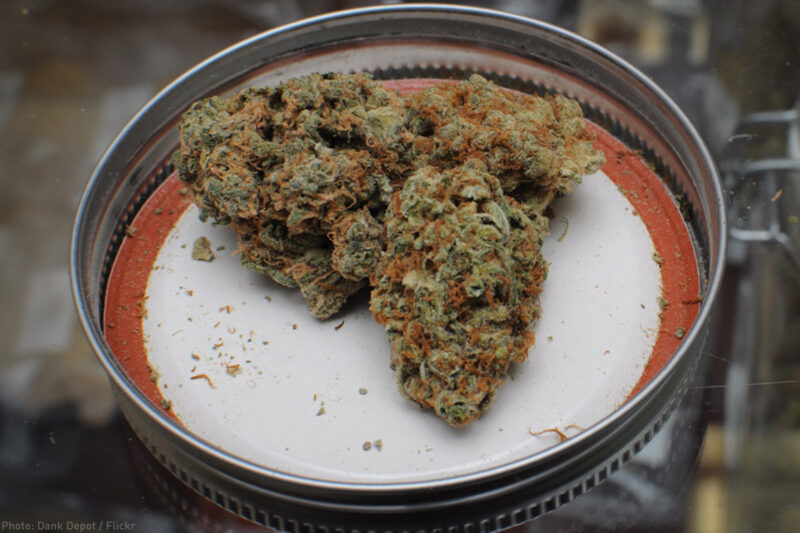 The New York Police Department regularly faces criticism over the disproportionate number of Black and brown people who are arrested for marijuana possession. The department’s constant refrain has been that officers go where they are called. They respond to complaints to the city’s 311 assistance line or calls to 911. Arrests, they say, flow naturally from those calls to action.

But a New York Times analysis published this month threw that contention into serious doubt. As the paper reported, “among neighborhoods where people called about marijuana at the same rate, the police almost always made arrests at a higher rate in the area with more black residents.” An analysis by Politico New York in March also reached a similar conclusion. These reports have energized the campaign to legalize marijuana in the state.

The disproportionate impact that marijuana arrests have on communities of color in New York City, the state, and the rest of the country is profound — and exceptionally well-documented. Nationwide, Black people are almost four times more likely than their white neighbors to be arrested for marijuana possession, despite similar rates of consumption across racial and ethnic groups. In New York state, which has some of the harshest enforcement practices in the country, more than 80 percent of people arrested for marijuana possession were Black or Latino.

Because of that loophole, low-level possession remains one of the top charges for arrest in New York. Since 1996, there have been more than 800,000 arrests for possession of small amounts of marijuana, and nearly 70 percent of those arrested are under 30. In 2016 alone, nearly 23,000 people were arrested statewide. On average, 60 people are arrested each day for marijuana possession in New York.

Those arrests take an enormous toll, especially on communities of color. Hundreds of thousands of people across the state are funneled into the criminal justice system, which dramatically diminishes their chances of future employment and hampers their ability to support their families.

This harsh enforcement also continues despite the fact that public opinion in New York and across the country is firmly on the side of marijuana legalization. A Pew poll in January found that 61 percent of Americans favor legalization. That is a seismic shift from just eight years ago when only 32 percent held that view. Similarly, New Yorkers back legalization by a 2-to-1 margin.

Slowly, but surely, some state officials have begun to inch toward the same conclusion. New York City Mayor Bill de Blasio announced last week that he would direct NYPD officers to issue summonses to people smoking marijuana in public instead of arresting them. De Blasio will also create a task force to help ready the city for the day when marijuana is legalized statewide. Meanwhile, Gov. Andrew Cuomo said recently that a report he ordered on marijuana legalization could be out “within days.”

Cuomo and state lawmakers, however, should stop talking and make New York the 10th state to legalize recreational marijuana by passing the Marijuana Regulation and Taxation Act. The bill, introduced last year by Assemblymember Crystal Peoples-Stokes and Sen. Liz Krueger, would significantly reduce or eliminate criminal penalties for marijuana offenses. It would also drive millions of dollars in investments to low-income communities that have been hit hardest by the decades-long war on drugs.

The bill removes marijuana and marijuana products from the state Controlled Substances Act, and it eliminates many existing misdemeanors and felonies related to marijuana from the criminal code. Importantly, these dramatic reductions in criminal liability will be retroactive, meaning past convictions for crimes reduced or eliminated by the legislation may be sealed or reduced on the person’s criminal record.

The fiscal benefits of legalizing marijuana are obvious. Not only does it stop police, courts, and probation officers from wasting time and money on enforcing pot prohibition, it also raises tax revenue generated by legal sales. And the revenue is expected to be huge. New York City Comptroller Scott Stringer released an analysis this month estimating that the state would bring in $436 million each year in new tax revenue in pot and that New York City would rake in another $335 million annually.

Under the Marijuana Regulation and Taxation Act, 50 percent of the money left over after researching and implementing the law would go towards the Community Grants Reinvestment Fund. The program funds job training, after-school programs, and community-centered projects in low-income communities and in areas disproportionately hurt by the war on drugs. Another 25 percent of the surplus revenue will go towards funding drug treatment programs and public education campaigns. The final 25 percent will go toward funding public schools.

The legislation is a mature attempt to right a grave injustice just as the Trump administration’s stance on marijuana policy reform has devolved from mere indifference and inaction to outright hostility. As is often the case these days, logic and progress have been abandoned by Washington and left to the states. It’s time for New York to step up, move past the era of pearl-clutching and cries of reefer madness, and let common sense lead the way.