Thankfully, most of these bills have failed, but the most pernicious of them has passed in Florida and is awaiting Gov. Rick Scott’s signature. Florida’s bill goes so far as to make people applying for public assistance, who have very limited means, pay for the cost of their drug test. If the individual’s drug test comes back negative, the state will then reimburse individuals for the cost of the test. If the drug test comes back positive, Florida will not provide drug treatment, it will merely make the applicant ineligible to reapply for TANF for a year.

The process is costly (Maddow reports it could cost the state anywhere from $1 million and $8 million), bureaucratic and simply demeaning to Florida residents. It is also unconstitutional. Michigan is the only state to have attempted to drug test welfare recipients — a policy that was struck down by the courts as unconstitutional in 2003. Of course, none of this will stop Gov. Scott, who campaigned on this issue and has begun blanket drug-testing of state employees, from signing the bill into law.

Last week, Rachel Maddow explained the utter absurdity of Florida’s new law in a manner much more eloquently than I ever could. Take a look: 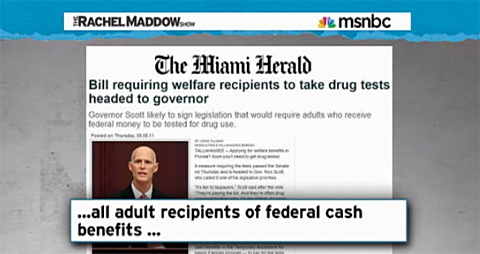