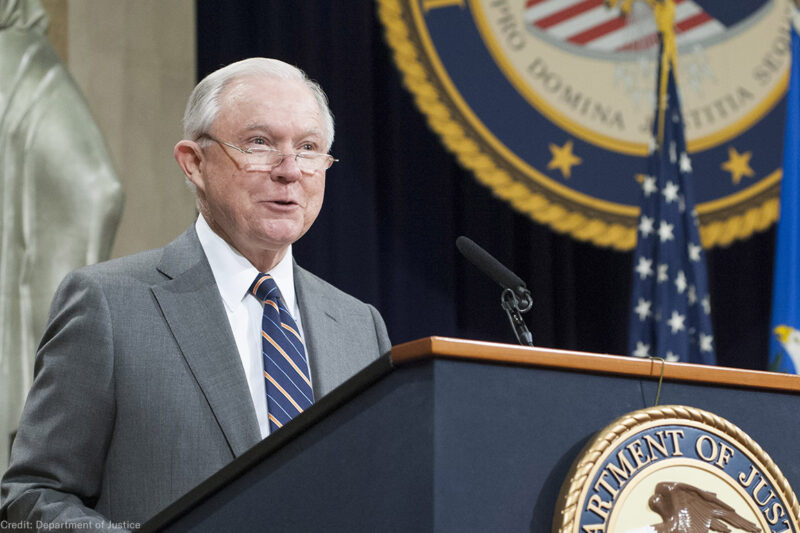 Earlier this year, the Tennessee Board of Professional Responsibility released an ethical opinion that required federal prosecutors working in the state to disclose all information favorable to criminal defendants. It stated those disclosures must be even broader and earlier in the process than the U.S. Constitution requires. This is a praiseworthy move that could help stem the tide of coercive plea bargains and wrongful convictions in Tennessee, which fuels the epidemic of mass incarceration in the state and across the nation.

But rather than applaud the state for its reforms, the federal Department of Justice is attempting to challenge Tennessee’s decision and is lobbying for less disclosure. In other words, Attorney General Jeff Sessions is once again attempting to use the Justice Department to drag our nation back to a “tough-on-crime” era that was really just “tough on people” and trampled on the rights of defendants. The Justice Department is wrong, and Tennessee must stand by its decision.

Over the summer, the three sitting U.S. attorneys in Tennessee — the highest ranking federal criminal justice officials in the state — wrote a letter opposing the new rule. The most disingenuous of their arguments is that expanding discovery obligations beyond what the Constitution requires would create “uncertainty.” To the contrary, Tennessee’s rule eliminates the “materiality” requirement in constitutional law, such that prosecutors can now turn over all evidence favorable to the accused without the prosecutor guessing how that evidence will impact a later trial. If anything, this simple rule creates more certainty, not less, because prosecutors won’t have to make the blind determination of what is material to the case before trial actually occurs.

The real reason the Justice Department opposes the new rule is that expanded discovery, provided as early as possible, gives the defense more ammunition when negotiating plea bargains and litigating at trial, which makes prosecutors’ jobs harder. The rule also increases the chances that the truth comes to light and reduces the possibility of wrongful convictions. Therefore, it is baffling that any prosecutor, much less the highest federal prosecutors in the land, would oppose that result.

To be sure, the department also makes the more reasonable objection that, on occasion, releasing witnesses’ identity or statements early on could lead to retaliation against those witnesses and subvert justice — often needlessly, if the witnesses do not ultimately testify publicly. This is a legitimate concern, but one that can be mitigated in particular cases by a host of accommodations, including but not limited to sealing orders, redactions, and prosecutors’ own witness protection programs. It is not a sufficient reason to oppose these reforms entirely.

This is not the first time the Justice Department has intervened in a state on this very issue, siding with suppression over transparency, and that includes the Obama administration.

But the current Jeff Sessions’ Justice Department — and by this we refer to Sessions and his top political appointees and not the dedicated, apolitical line prosecutors across the country — has been particularly hostile to the constitutional rights of a host of people, from criminal defendants to immigrant detainees. This hostility stands in defiant contrast to criminal justice reforms sweeping the nation at both the state and local level.

The border crisis exposed Sessions’ willingness to tear families apart and inflict permanent psychological damage on children as punishment for mere misdemeanors. His Justice Department also shuttered the federal office that provided financial assistance to poor defendants, even though we know the life-or-death value of public defense for low-income people. And, with respect to this very issue, at least the Obama administration realized its faults and appointed a national director of discovery in 2010.

For a department whose own independence is under attack by a president who doesn’t seem to recognize the rule of law, it’s particularly ironic and troubling to see that same department infringe on the sovereignty of Tennessee. More and more states have defeated the department’s efforts in this space and chosen to expand discovery obligations. Many cities and counties have also embraced progressive prosecutors who are fed up with tough-on-crime, business-as-usual approaches that value locking people up over serving the community.

The state’s Board of Professional Responsibility will make a final decision on its ethics opinion at its December meeting. The board should stick to its guns, affirm the opinion, demand more of prosecutors operating in its courts, and shore up the rights of criminal defendants. It should also resist those seeking to drag them backwards into a past that was less just and more oppressive — including, and especially, the Justice Department of Attorney General Jeff Sessions.