Justice for Reggie Clemons: Not Another Troy Davis 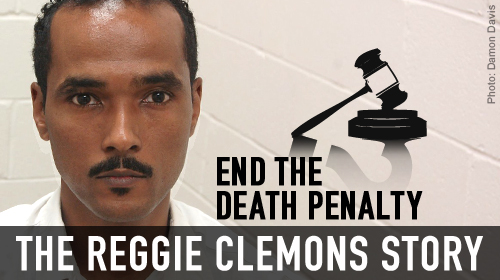 Monday, a “special master” in St. Louis begins review of the case of Reggie Clemons to determine if his trial was fair and his death sentence is just. Reggie Clemons is on Missouri’s death row for murders he did not commit. When Troy Davis was executed one year ago this month, we thought we’d put the absolute horror and national shame that our government would put an innocent man to death behind us. But the case of Reggie Clemons looms large – Missouri, the state that “compromised” Black people by authorizing slavery within certain parameters in order to be admitted to the United States, has continued that legacy of disrespect of Black life by engaging in a flawed, decades-long effort to execute an innocent Black man.

Late one night in 1991, two young white woman plunged to their deaths from the Chain of Rocks Bridge over the Mississippi River in St. Louis, Missouri. The original suspect, Thomas Cummins, the out-of-town cousin of the women originally admitted to making a sexual advance on one of them, startling her and causing her to fall into the river, her sister jumping in afterwards in a failed attempt to save her. Cummins confessed to the crime after failing a lie detector test and changing his story several times. Only after the police charged and then inexplicably released this first suspect, did they turn to Reggie Clemons, who had no criminal history, and three others and charge them with murder.

Reggie Clemons maintains his innocence and there is no physical evidence of his involvement in the deaths – no fingerprints, no DNA, no hair or fiber samples – despite a rape accusation. Reggie Clemons’ case was marred by race bias, police brutality, a unconstitutionally-constituted jury, prosecutorial misconduct, and a wholly inadequate defense.

He was convicted as an accomplice mostly by the testimony of two witnesses, the one who at first was considered a prime suspect, and another who confessed to participating in the deaths, received a much lighter sentence, and is out of prison. The first witness, the victims’ cousin, who was with the victims at the time, confessed to the crime himself and was originally charged with their murders. He later claimed Clemons and three others had raped the women, pushing them off the bridge and forcing him to jump. He claimed he was forced to swim to shore, an almost impossible feat to survive, especially with clothes intact and hair neatly-combed and dry, as his were. This story failed a polygraph test. With this new story however, his own charges were dropped.

The second witness, the only white codefendant, gave different accounts to police and in another codefendant’s trial than the testimony he gave at Mr. Clemons’ trial. He told a jailhouse friend he would lie in exchange for a plea bargain because no one would believe a bunch of black men. That witness pled guilty and is now out of jail.

These two witnesses were white, while Mr. Clemons and the two other young men sentenced to death in this case, Marlin Gray and Antonio Richardson were Black. Of Mr. Clemons’ two Black codefendants, one remains in prison, and the other was executed. All three consistently maintained their innocence.

The parade of legal horribles masquerading as due process include the following:

At his arraignment following police interrogation, Mr. Clemons was sent by the judge to the hospital for treatment due to injuries and swelling to his face. One of the two witnesses to testify against Mr. Clemons later received a $150,000 settlement for the police brutality that occurred during the investigation of his role in the deaths.
Mr. Clemons soon retracted the “confession” to rape he gave after the brutal beating with the police that resulted in his injuries. The district attorney never even brought rape charges against Clemons as there was no evidence rape had ever occurred. DNA evidence excluding Reggie Clemons as a perpetrator had been hidden by the prosecutor and was only “discovered” after the trial and sentence of death were imposed.
In 2002, a U.S. District Court judge overturned Mr. Clemons’ death sentence because six prospective jurors had been improperly excluded at jury selection. A higher court reversed this ruling on purely technical grounds – saying only that Mr. Clemons’ lawyer had not properly preserved the claim for federal judicial review.
Four federal judges have agreed that the prosecutor’s conduct during Mr. Clemons’ trial was “abusive and boorish.” In his closing statement, the prosecutor compared Mr. Clemons to two convicted serial killers, even though Mr. Clemons had no criminal record. Mr. Clemons’s prosecutor had a long history of legal misbehavior and was later held in contempt and fined for his misconduct at Mr. Clemons’s trial.
Mr. Clemons’ trial lawyers were a recently-divorced couple, one of whom moved out of state six months before his trial and maintained a full-time job in that other state during the trial, and the other of whom was subsequently disbarred. Another lawyer hired to assist in the case said that as the trial loomed, it was clear the two trial lawyers had not done the necessary preparation.

Reggie Clemons’ case has many of the classic concerns that plague capital punishment in the United States – racism, prosecutorial misconduct, a coerced confession, lying witnesses, ineffective defense counsel, and no physical evidence. The similarities between Mr. Clemons’ case and that of Troy Davis are eerie.

We hope the special master appointed to hear the matter this week reviews the facts and processes of this case thoroughly. The sham prosecution and the failure of the state to produce any reliable evidence to support the conviction and death sentence cast further doubt on the failed government program that is called capital punishment. Reggie Clemons was, at best, in the wrong place at the wrong time.

We must heed Marlin Gray’s final words before his execution in 2005 – “This is not a death, it is a lynching.”