Louisiana Locks Up More of Its Citizens Than Any Other State in the Nation, but Reform Is Coming 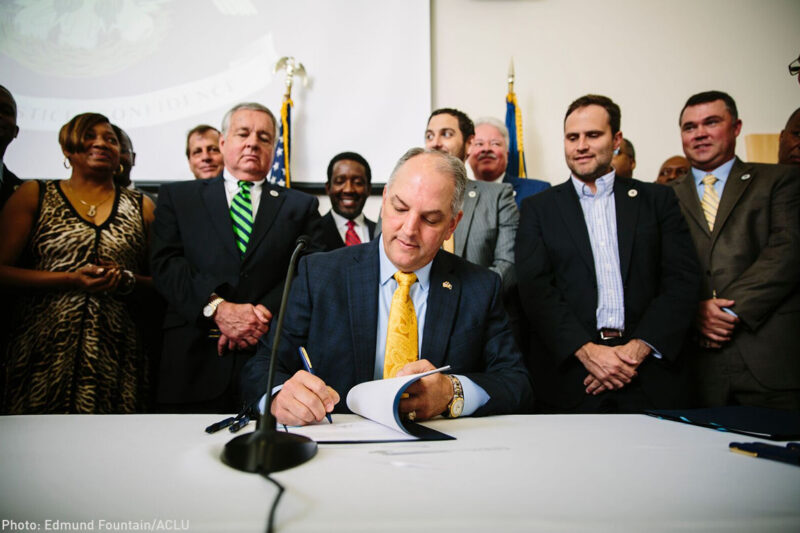 I was in the room last week when Gov. Jon Bel Edwards signed a package of 10 bills, passing the most aggressive criminal justice reform the state — and possibly the region — has ever seen.

“We knew we needed to be bold, and think big, and get smart on crime,” Gov. Edwards said. “And, by the way, bold does not mean risky, it just means refusing to do something you’ve been doing just because you’ve been doing it, but really open your eyes to see the system as it is.”

What Gov. Edwards is referring to here is his state’s addiction to mass incarceration. Louisiana not only tops every other state in the U.S. in its incarceration rate, but it outpaces other nations. The state’s incarceration rate is nearly 13 times as that of authoritarian China. Last year alone, corrections cost the state nearly $700 million.

But 2017 may be Louisiana’s turn-around year.

Republicans, Democrats, and independents put aside partisan politics and threw their weight behind a legislative package to fix Louisiana’s broken criminal justice system. The 10 bills, known as the justice reinvestment package, are expected to result in a 10 percent reduction in Louisiana’s prison population and save the state $262 million.

A 10 percent reduction may sound small, but it will change the lives of thousands of people. And not just those who will be released or those who won’t end up behind bars unjustly, but the many families hurt by a broken, retribution-based system.

Flozell Daniels, a reform advocate, spoke passionately and courageously in legislative hearings about losing his child to gun violence, but how continuing a system focused on revenge does not bring him or his community healing — and does not deter crime.

Louisiana’s criminal justice win has nationwide implications. This historic legislative moment is a model of success that other states can follow.

Reforms include reducing and eliminating mandatory minimums, reducing habitual offender penalties, and expanding parole eligibility. Juveniles sentenced to life will be eligible for parole after serving 25 years. Fines and fees will be tailored to a person’s ability to pay, and those who make consistent payments will have an opportunity to be granted debt forgiveness. This means fewer will be punished simply because they are low-income and can’t afford to pay the penalty.

Seventy percent of the savings — approximately $184 million — will be strategically reinvested into programs proven to reduce recidivism and support crime victims. People who have served their time will have restored access to public assistance and increased employment opportunities through professional licensing programs.

The successful passage of the justice reinvestment package was due in large part to the efforts of a diverse, grassroots coalition, Louisianans for Prison Alternatives (LPA). Formed in May 2016 by the American Civil Liberties Union, the Southern Poverty Law Center, and Voices of the Experienced, LPA leveraged the voices of formerly incarcerated community leaders, clergy, and the business community.

On a humid day in April, more than 600 Louisianans drove and bussed into the State Capitol in Baton Rouge to share personal stories in a day of advocacy. And throughout the session, LPA advocates delivered hundreds of community members’ postcards and letters and generated thousands of emails and phone calls to legislators. This is the largest criminal justice reform grassroots effort the state had ever seen.

But we’re far from done. It’s going to take years for Louisiana to get out of the mass incarceration hole it has dug itself into.

Hearing after hearing, opponents of reform fought to exclude people convicted of a violent crime from most of the package. Currently, more than half of people in state prisons across the country have been convicted of violent offenses. If Louisiana and other states are really serious about ending this country’s addiction to mass incarceration, we need systemic reform beyond nonviolent, drug crimes.

Some reforms passed were not retroactive. In recognizing our former practices were erroneous, we must allow policy changes to impact those already wronged by the system through retroactivity.

We’ve come a long way nonetheless. Even five years ago, criminal justice reform was taboo in Louisiana. And the only voices at the table were district attorneys and sheriffs pushing for harsher penalties and longer sentences to make sure local prisons were full and making a profit.

The mood was victorious on June 15th, when Governor Edwards penned his signature in a room filled with nearly 200 people — not just legislators and some of Louisiana’s most prestigious civil rights leaders, but most importantly, formerly incarcerated Louisianans and families who have loved ones in prison.

It was clear: Louisiana made its first step to becoming the world’s decarceration capital.