No Money to Make Bail or Pay for a Lawyer? Too Bad, Say Officials in Glynn County, Georgia 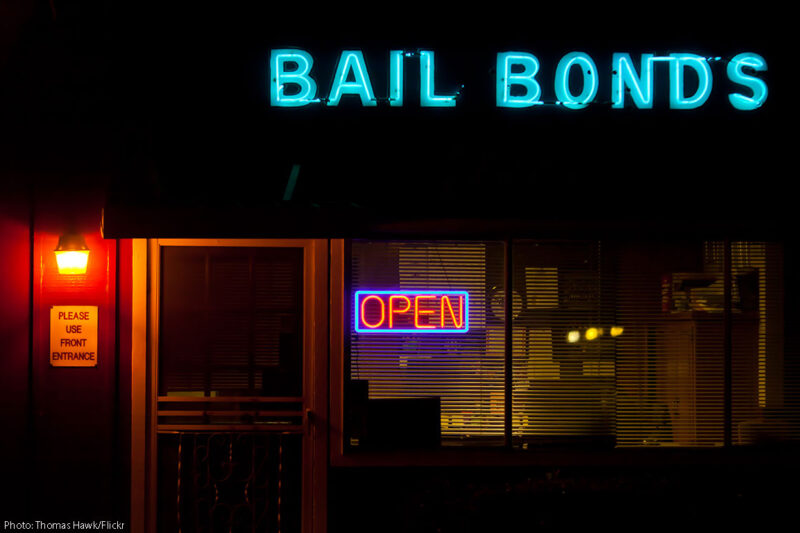 Margery Mock is 28 years old and the mother to an 8-year-old girl. She is currently unemployed and battling homelessness, having spent one month in a hotel and several nights in her storage unit, where all of her belongings are kept. She was recently arrested on an alleged criminal trespassing charge from trying to visit a relative at a motel and incarcerated on a $1,256 bond that she can’t afford.

Mock is a victim of Glynn County, Georgia’s wealth-based pretrial system. The county allows those with money to walk free while they await trial, while those who can’t make bail remain locked up. It also fails to provide people who can’t afford to pay for a lawyer with a public defender to argue for their release.

Both practices are illegal. The constitutional guarantees of equal protection and due process prohibit people from being jailed simply because they cannot afford a monetary payment. The Sixth Amendment guarantees people accused of crimes will be appointed lawyers to defend them if they cannot afford to hire a private lawyer.

But Mock was incarcerated without anyone asking if she could afford to pay for her release or learning anything about her individual circumstances. It didn’t matter to the county that $1,256 is an astronomical amount for someone with no permanent address or reliable income. No one asked Mock what that bail amount — and the inability to pay it — would mean for her or her family. Rather, the Glynn County sheriff simply followed a bail schedule, a document that automatically sets money bail amounts according to the charged offense.

Even when people accused of crimes get their first court hearing, the judge usually does no more than confirm the bail amount they could not afford in the first place. To make matters worse, Glynn County only pays one lawyer to be the public defender in all misdemeanor cases. This contract defender, B. Reid Zeh, does not visit clients who are stuck in jail, file motions on their behalf, or appear at preliminary hearings to request lower bail. Instead, he usually meets clients when they plead guilty and simply signs off on their sentencing paperwork. Those with means face none of these barriers.

All in all, the Glynn County’s practices amount to one system for the poor and another system entirely for those of means. This reality was driven home on March 5 when none other than Zeh, the lone public defender in the county, was arrested after an altercation at a local bar. His bail was set at $1,256, which he immediately paid out so that he could remain free as his case moves forward.

Had Zeh not had the means to pay his bail, as was the case with Mock, he’d have remained in jail as his case moved forward, in the same desperate situation that most of his clients are forced into.

In an effort to stop this discriminatory detention of the poor, the ACLU, the ACLU of Georgia, and James A. Yancey, Jr., a local and longtime civil rights and criminal defense advocate, have sued Glynn County for jailing people like Mock, who cannot simply buy their freedom. We have also sued the county and public defender Zeh for failing to provide indigent persons with lawyers in time to fight for their release on lower or nonmonetary bail.

On any given day, Georgia county jails warehouse over 43,000 people, nearly 30,000 of whom are awaiting trial. Pretrial incarceration — locking up people who are presumed innocent and have not been convicted of a crime — is a key driver of Georgia’s exorbitant jail incarceration rate, which is the second highest in the nation. In 2013, Georgia had almost double the annual jail admissions of Illinois, which is home to 2.5 million more people.

The county’s illegal practices disproportionately affect African-Americans, which isn’t surprising giving its history of racism and government overreach. According to the 1860 census, Glynn County had Georgia’s third-highest concentration of enslaved persons, amounting to 73 percent of the population. Today, despite making up only one-fourth of the county’s population, Black people account for half of the county’s jail population.

Beyond being illegal and disproportionately harming Black people, using money bail to incarcerate has disastrous effects on an arrestee’s criminal case. It is an open secret that pretrial detention is a prosecutor’s most powerful bargaining tool. In 2013, a local news story quoted the Glynn County prosecutor acknowledging the power of incarceration on money bail to achieve convictions, saying arrestees “just want to plead guilty, get back home and resume their lives.” This attitude eviscerates the presumption of innocence and ignores the government’s due process obligation to presume release upon arrest.

National research consistently shows that being jailed before trial significantly increases your likelihood of conviction, mostly because people eventually break down and plead guilty. They do this even if their case could have been dismissed had they been able to buy their release or had a public defender to help them fight for lower bail.

And once released, there may well be further consequences. To make bail, arrestees and their loved ones often desperately scrape together money to pay bail and are then exploited by the bail industry.

Glynn County’s system of detention based on ability to pay is unconstitutional and inhumane. And the county’s failure to provide adequate public defense representation to indigent persons accused of misdemeanors only furthers the harms. Nothing personifies this more than the unfair way the system treats a Mr. Zeh and a Ms. Mock.