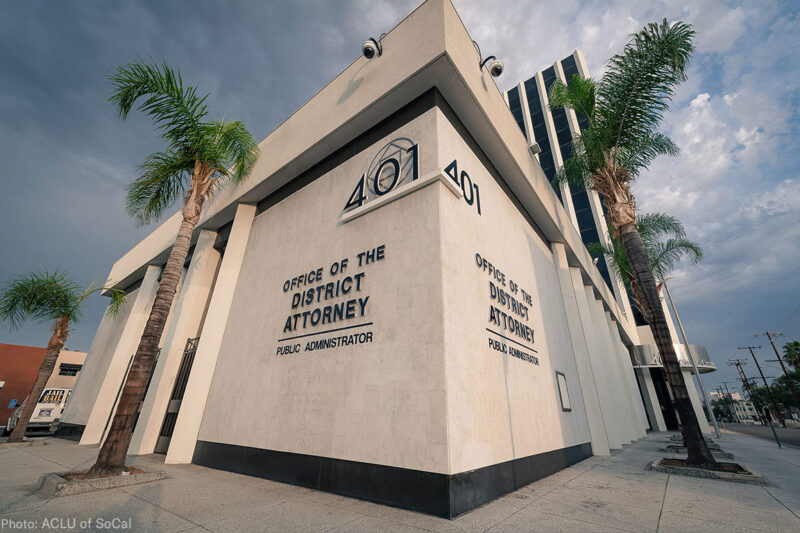 When Bethany Webb’s sister, Laura, was killed in a mass shooting in 2011, she couldn’t imagine things getting worse. But then-District Attorney Tony Rackauckas of Orange County, California, took the case.

In his zeal to impose the death penalty — over Webb’s objection — Rackauckas employed jailhouse informants to elicit damning statements from the defendant, Scott Dekraai, while Dekraai was in jail. These informant-defendant interactions violated the Constitution’s right to counsel — no one is allowed to interrogate defendants without their attorneys present. Rackauckas knew that what he was doing was illegal, but he did it anyway. And it wasn’t the first time Rackauckas had broken the law in pursuit of a conviction.

In fact, Rackauckas and Orange County Sheriff Sandra Hutchens had overseen a systematic, methodical program of using jailhouse informants for years. Their era of impunity ended only in 2014, when Dekraai’s attorney uncovered their illegal jailhouse informant program. Remarkably, even after their unlawful acts were discovered, Rackauckas, Hutchens, and their employees denied it, going so far as to lie about it under oath to Orange County judges and juries.

Rackauckas’ and Hutchens’ illegal acts corrupted the entire system, making it impossible for crime victims to achieve closure, defendants to receive due process, and the community to trust those charged with protecting them. When law enforcement cheats, we all lose.

Now, seven years after Laura Webb was killed, Bethany Webb, the sister of a murder victim, has joined forces with the ACLU, the ACLU of Southern California, People for the Ethical Operation of Prosecution and Law Enforcement, and the law offices of Munger, Tolles & Olson LLP, to end this illegal and destructive informant program.

The Orange County informant program has three primary components, all of which violate the law. First, Orange County deputy sheriffs cultivate relationships with professional jailhouse informants. These informants are facing serious jail time themselves, and therefore have a strong incentive to enter the employ of law enforcement.

Once incarcerated men become informants, the Sheriff’s Department places them strategically near target criminal defendants awaiting trial, and the informants proceed to extract incriminating information. The informants then trade that information for jailhouse perks, vast sums of money, and, most importantly, time off their sentences from the district attorney. For example, deputy sheriffs paid one set of Mexican Mafia informants $150,000 over 18 months.

Second, informants often use threats of violence to get the information they need, in violation of defendants’ due process rights. In some cases, informants with a history of violence told defendants that if the defendants did not admit involvement in the crime with which they were charged, they would be assaulted or even executed on sight. For many, the choice was clear: confess or die. The unreliability of such coerced, involuntary confessions is part of why the Supreme Court has prohibited the tactic.

Third, to ensure the illegal informant program remains secret, the Orange County District Attorney’s Office has routinely suppressed all information about it. The office is happy to use the illegally extracted information to secure convictions; it just doesn’t want anyone, especially defendants and their attorneys, to know that the information was illegally obtained. Indeed, officials have lied under oath keep this program secret.

This systematic failure to disclose favorable material information to defense counsel — who should have the chance to cross-examine the informants on the tactics they use and benefits they receive — violates the U.S. and California Constitutions, as well as statutory disclosure obligations in the California Penal Code.

Rackauckas and Hutchens have been breaking the law in this way for years because they are more concerned with securing convictions than serving justice. To put a stop to their lawlessness and lack of accountability, we have filed a lawsuit to bring to light the full extent of the illegal program, including all cases, like the Webb case, that have been tainted. We are also seeking court orders to halt the program immediately, and to require the District Attorney and Sheriff’s Department to undertake concrete, lasting reforms to ensure that such a miscarriage of justice cannot happen again.

Last year, the ACLU Campaign for Smart Justice announced a new, multi-year initiative to make sure that prosecutors like Tony Rackauckas who break the law, and those like Sandra Hutchens who enable them, are held accountable, while those who obey the law and support their communities are lifted up. The public demands it. A recent ACLU national poll found that 95 percent of respondents support the idea that a prosecutor engaged in misconduct should be held accountable.

This lawsuit is the part of that effort, as we work toward much-needed reductions in mass incarceration and reforms in the criminal justice system nationwide.