For the Poor, Every Arrest is a Gamble 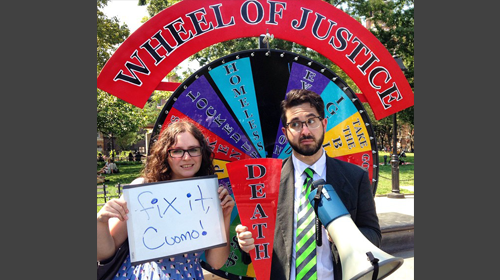 If you’re rich like Lindsey Lohan, you can be charged with assault and let off the hook – all with the help of a highly paid, private lawyer. But if you’re poor and accused of even the most minor misdeed, you spin the #WheelofJusticeNY at your own risk. Any outcome – from losing your kids to losing your home – is possible.

Every day across parts of New York, people who have never been convicted of a crime languish in jail. They go before judges without lawyers by their sides. And they plead innocent or guilty without understanding what it means for them and their families. New Yorkers are too often undefended and alone when looking up at a judge. And the state has been ignoring its responsibility and allowing this injustice to perpetuate for more than 50 years.

In the United States, you have the right to an attorney – even if you cannot afford one. But in New York and many other states, if you’re poor and you enter the broken criminal justice system, justice is a gamble. Public defenders are chronically underfunded and stretched too thin, with poor people paying the ultimate price.

To help New Yorkers understand all that is at stake, this week in Manhattan the New York Civil Liberties Union unveiled a 7-foot-tall Wheel of Fortune-style game that will travel the state. The “Wheel of Justice NY” tells the true stories of real New Yorkers who have been chewed up and spit out by the state’s broken criminal justice system.

Stories like that of Kimberly H., whose lawyer advised her to plead guilty to a felony when she only committed a misdemeanor. He had a history of neglect and was later disbarred, but not before Kimberly lost her job and home.

Or like Jacqueline W., who sat in jail for 50 days for a crime she didn’t commit. Her sick husband died while she sat in jail, but because she couldn’t reach her lawyer, she didn’t get to say goodbye or attend the funeral.

The stories go on and on. They are the experiences of real New Yorkers whose lives have been impacted and even ruined because they did not have access to adequate public defense services. Their stories came to light through Hurrell-Harring et al. v. State of New York, a class action lawsuit challenging New York’s failure to provide effective counsel to poor New Yorkers accused of crimes. The case was filed in 2007 by the New York Civil Liberties Union and the law firm of Schulte Roth & Zabel LLP. This fall, the case will finally have its day in court. The trial will be the first of its kind in the nation.

If you can’t make it to the New York State Fair or the Yankees-Red Sox game to spin the Wheel in person, you can still play. The Wheel of Justice NY is also spinning online. Visit www.WheelofJusticeNY.org today to take a spin or call on New York Governor Andrew Cuomo and the state’s legislative leaders to reform New York’s broken public defense system.

Justice shouldn’t depend on how much someone has in the bank. What misfortune might await you? Spin the #WheelofJusticeNY to find out.