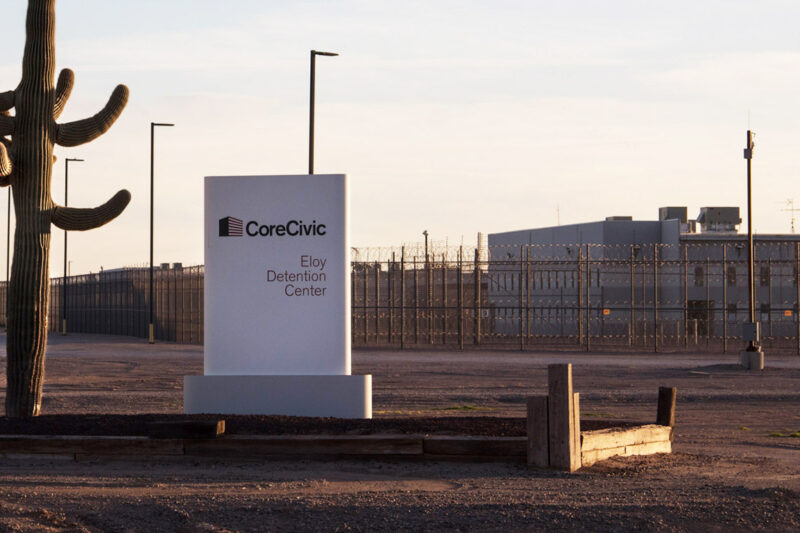 In November 2017, Gov. Steve Bullock convened a special legislative session to fix Montana’s $75 million budget deficit. The executive and legislative branches arrived in the capitol, allotting themselves five days to hash out whether to cut essential services and programs, raise revenues, or both. CoreCivic — which owns and operates the Crossroads Correction Center, the only for-profit prison in Montana — smelled blood in the water.

With its multimillion dollar state contract set to expire, CoreCivic made an offer to Gov. Bullock: If he agreed to extend the Crossroads contract for another 10 years, the private prison company would return $34 million that the state had been accruing in a “buy back” fund. The fund is currently under CoreCivic’s control, and its purpose was to help the state eventually purchase and take over the approximately 600-bed facility in Shelby, Montana.

In response to CoreCivic’s blatant attempt to leverage the state into a decision that would entrench private prisons and harm taxpayers, the ACLU of Montana launched an aggressive lobbying effort. The result: Montanans called the governor and their legislators. Things got tense in the capitol, and eventually the governor said “no” to CoreCivic’s initial offer in November, 2017.

That “no” did not last, however. In late July, Gov. Bullock extended CoreCivic’s contract for two more years, rather than 10, in return for the $34 million. That’s two years too long.

Motivated only by profit, CoreCivic — which changed its name from Corrections Corporation of America to mask its damaged reputation — has a terrible track record in the state at delivering corrections solutions that make sense. In fact, CoreCivic’s abysmal reputation extends well beyond Montana’s borders. Across the country, the private prison giant is known for human rights abuses, understaffing that directly contributes to increased violence, and prioritizing profits over people.

From Ohio to Texas to Idaho, CoreCivic has been sued time and again by the ACLU. The majority of those lawsuits have focused on increased violent incidents at CoreCivic facilities, some of which turned deadly. In 2009, we sued CoreCivic over Native American prisoners’ complaints that the company conducted mass strip searches and prevented them from celebrating sweat lodge ceremonies.

But CoreCivic is also infamous for its strong-arm tactics in state legislative and administrative processes. The company holds itself up as an advocate for policies that would reduce recidivism. But according to its 2016 annual report, CoreCivic actually views reforms to decrease occupancy — in other words, criminal justice reforms — as a threat to its financial bottom line, referring to these reforms as “risk factors.”

The company has shrewdly and immorally moved from a brick and mortar detention strategy to one focused on embedding itself into all possible money-making opportunities in the criminal justice realm. CoreCivic has expanded into community corrections, halfway houses, and supervision, where it can quite literally control who will go to prison by way of burdensome conditions and violations placed on probationers and parolees.

This is the environment in which Gov. Bullock recently extended CoreCivic’s contract with Montana for two years without citing any urgent budgetary need and, in the same statement, projecting the state would see revenues far above what was expected. The budget crisis — which ostensibly led Bullock to extend CoreCivic’s contract for a $34 million injection of cash to fund the government — wasn’t as pressing as Bullock originally led Montanans to believe it seems.

But Bullock isn’t the only politician CoreCivic has compromised. Montana’s lone congressman, Greg Gianforte, invested hundreds of thousands of dollars of his own money in the private prison industry after Donald Trump was elected. Under the Trump administration, private prisons are suddenly back in demand, including a monumental expansion into immigrant detention, including beds at CoreCivic’s facility in Montana.

Now, instead of being leaders in criminal justice reform, our highest elected officials are shaking hands with an industry that warehouses their constituents in facilities without proper medical care and subjects them to racial discrimination, physical abuse, religious discrimination, and unchecked sexual assault.

Gov. Bullock’s deal is all the more egregious in the context of our current political environment. With a Department of Justice that is attacking immigrants, the poor, and communities of color under the guise of “tough on crime” law enforcement, we need our leaders to fight tooth and nail against an industry that profits from these racist and failed policies. For too long, CoreCivic and companies like it have used every trick in the book — from “work programs” to vertical integration – to manipulate state governments into inextricably linking themselves to the private prison industry.