We Already Have Police Helicopters, So What’s the Big Deal Over Drones? 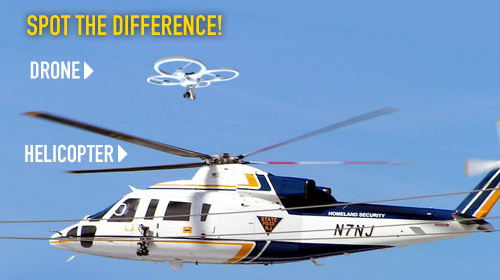 As drone regulation legislation works its way through Congress and the 30 (so far) state legislatures where it has been introduced, one question that we hear a lot these days is, “we’ve had police helicopters for a long time, what’s so different about drones?”

For one thing, police helicopters do raise privacy issues. Because of the expense of using manned police aircraft, privacy invasions have not risen to the level that legislators have felt compelled to address them, but incidents do happen. In 2005, for example, a police helicopter supposedly monitoring a street protest in New York City instead trained its infrared camera for a prolonged period on a couple making love on a pitch-black rooftop patio. Any police helicopter that followed a citizen around town for no reason, or hovered over the backyard of innocent homeowners whose daughter was sunbathing with her friends, would probably draw complaints. With drones, scenarios like those are bound to happen much more frequently. And that’s because there are some critical distinctions between manned and unmanned aircraft.

Manned helicopters and fixed-wing aircraft are expensive to acquire, staff, and maintain. A police helicopter costs from $500,000 to $3 million to acquire, and $200-$400 an hour to fly. Manned aircraft are large, complex machines requiring expert ground crews, multiple shifts of pilots and co-pilots, and (unlike drones which can often be hand-launched) runways or helipads. Such expenses mean there are inevitably going to be far fewer of them—which in turn means the police are likely to use them only where they are most needed.

With drones, on the other hand, it’s easy to foresee a day when even a professional police drone could be acquired for less than a hundred dollars, including maintenance costs. And if technology and laws eventually reach the point where drones can fly autonomously, they would become even cheaper because police departments wouldn’t even have to pay staff to control or monitor them.

In addition, there are some kinds of privacy invasion that are only possible with drones. For example, micro-drones maneuvering into intrusive places; even the smallest manned helicopter can’t fly into a garage or hover unseen outside a third-story bedroom window. Or (as I’ve written about before), the fact that drones can be silent; the loud noise a helicopter makes serves as a crude kind of “notice” that one may be under surveillance from the air. Silent or high-flying drones that can’t be heard provide no such notice.

3. Drones’ capabilities are likely to expand even further in the future

The fact that drones are so inexpensive will have another consequence: because so many drones will be out there, and so many people innovating with them, it’s very likely that the technology will develop new capabilities that have never existed for police helicopters. Many of these may be things that haven’t even occurred to anyone yet, but to pick just one possibility, it could involve the ability for swarms of drones to act in increasingly sophisticated, coordinated fashion to carry out surveillance that a single manned aircraft could never perform. And drones will permit continuous, 24/7 surveillance in a way that we haven’t seen with manned aircraft. First, because there will be many more of them, but also because manned craft must return to the ground regularly for shift changes and refueling; drone technology, on the other hand, is moving toward allowing unmanned craft to stay aloft for ever-longer periods of time, for example through solar power, ground-based laser recharging, or the use of blimps.