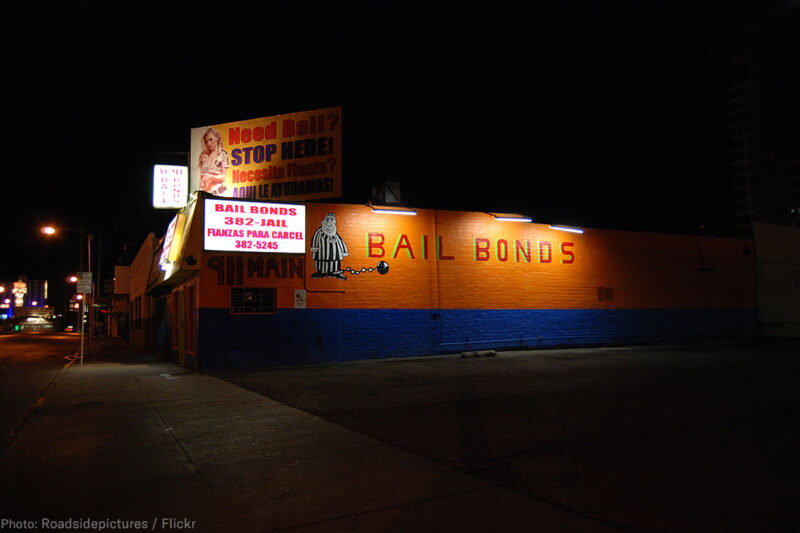 Whether or not you are in jail should not depend on your ability to pay for your freedom. Yet that’s the way our current money bail system works. It is one of the most corrupt and broken parts of our justice system.

Close to half a million people are in jail today awaiting trial, many of them incarcerated because they are too poor to afford cash bail. The time has come to abolish this system. The ACLU Campaign for Smart Justice is launching a nationwide campaign today to end this injustice of wealth-based incarceration, deploying all of our tools from our nationwide state affiliate structure to our strategic litigation, communication, and legislative advocacy to support bail reform movements and our partners in states across the country.

The original purpose of bail was to serve as an incentive to return to court when a person is arrested, released, and their case proceeds. However, the current money bail system has little to do with this original intent. Rather it has mutated into a way to separate people who have money from those who don’t. People with money can almost always buy their way to freedom, regardless of the charges against them. Yet people without access to cash too often end up in jail simply because they cannot afford bail, or alternatively they must take out loans from bail companies that charge exorbitant fees.

Even though you are presumed innocent in the eyes of the law, if you can’t afford cash bail, you will end up in jail for weeks, months, or, in some cases, years as you wait for your day in court. This wealth-based incarceration disproportionately punishes and targets Black people and other people of color as well as people from economically disadvantaged communities. Those trapped by this system often lose their families, jobs, and homes as they are denied justice while waiting for their case to move through the system.

They’re also more likely to be convicted of the crime they were charged with. One study showed that the non-felony conviction rate jumps from 50 percent to 92 percent for those jailed pretrial. For felony cases, the rate jumps from 59 percent to 85 percent. Whether you are detained before trial can very well predict whether you are eventually convicted, as people become desperate to leave jail and agree to plea deals. Prosecutors know how to work this system and take advantage of these desperate situations.

But prosecutors aren’t the only ones who benefit from this system. Multinational insurance corporations and for-profit bail bond companies make billions in profits, all on the backs of low-income people and disadvantaged communities. That’s because if you want to get out of jail and you cannot afford it, then you have to turn to one of these companies to secure your freedom. According to a recent report by Color of Change and the ACLU Campaign for Smart Justice, fewer than 10 companies are responsible for a significant majority of the $14 billion in bonds posted by for-profit bail each year. The industry collects around $2 billion a year in profits.

These companies require an upfront, nonrefundable fee—usually 10 percent—to pay for your bail. Yet often times families cannot afford this fee and end up paying through installment plans with high interest rates, trapping them in years of debt. So individuals with enough money to pay their entire bail upfront generally receive all of their money back when their case is resolved, but if a for-profit bondsman bailed you out — even if you never miss a day in court and are found not guilty — you and your family are still financially beholden, many times for years paying them back.

This is happening throughout the country. In Maryland, for example, the state’s Office of the Public Defender found that over a five-year period, “more than $75 million in bail bond premiums were charged in cases that were resolved without finding of any wrongdoing.” Overall, for-profit bond premiums cost families in the state more than $250 million over five years, and that does not include interest or other fees. When you take a deeper look, as we have, you’ll see that these predatory loan practices are often concentrated in the poorest communities and are disproportionately paid by Black people. We’re seeing hundreds of millions of dollars drained from our most underserved communities into the hands of the bail bond industry and multinational corporations.

There’s a better way towards justice. Some states — like New Jersey — have already pursued important reforms that begin to overhaul the money bail system. They are putting an end to people being punished simply because they cannot afford money bail. They are changing the culture of the courts and making sure that judges make informed decisions for each individual they see and exhaust all other alternatives before ever resorting to money bail.

And these reforms are beginning to work. Since New Jersey’s bail reform law took effect on January 1, 2017, the daily population in the state’s jails has dropped 17.2 percent and cash bail has been imposed only 33 times out of 33,400 defendants. New Jersey’s example demonstrates that we can fix this predatory system without inhibiting our justice system’s ability to fulfill its obligations. Incarceration rates are dropping where reforms have been implemented, and communities are better off for it.

Money shouldn’t determine someone’s freedom from incarceration. Big business must not be the gatekeeper that decides who is released from jail before trial. Profits must be removed from playing any role in deciding whether a person is free or in jail.