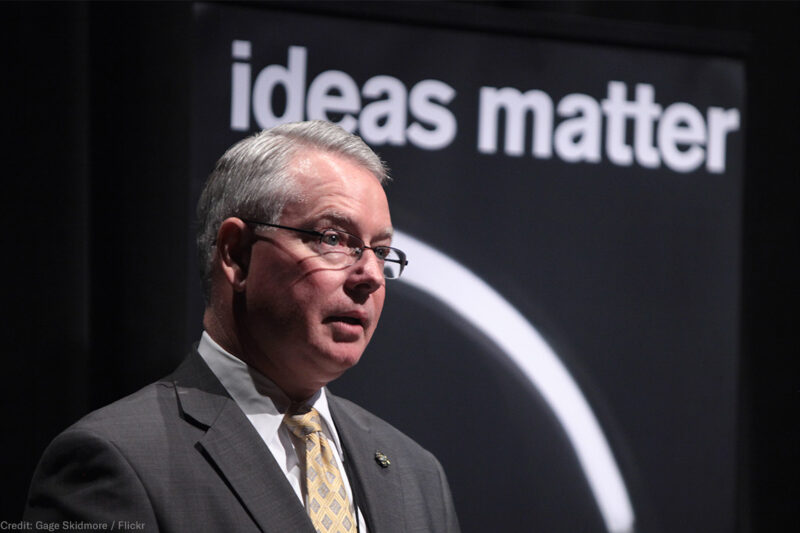 Maricopa County Attorney Bill Montgomery claims to be a big believer in data. As reported last year, Montgomery has blocked effective, commonsense criminal justice reform proposals from becoming law in part by criticizing them as having “no data to support” them, and as being “pet projects” “based on myths and rhetoric.”

Given this insistence on evidence-based policy, it would be reasonable to assume that Montgomery would happily comply with a public records request seeking exactly the sort of data he wishes folks would utilize. He’s done the exact opposite.

In October 2018, the ACLU of Arizona and investigative journalist Sean Holstege (a consultant that the ACLU of Arizona hired to write a report on Arizona prosecutors) sent Montgomery and his office a request seeking basic information about how the office functions: policies, procedures, staff rosters, budget figures, and data on how the office disposes of criminal cases.

This was a large request, to be sure. But rather than accept Holstege’s offers to receive information on a rolling basis, Montgomery’s office delayed, stonewalled, and provided platitudes rather than answers.

The office told Holstege it was “chipping away” and “working on it” while sending nothing for months. The office also claimed that certain documents “cannot be provided,” but gave no reason why. As of today, the office has furnished exactly one document: a staff roster for a single year out of a range of years requested.

This refusal to comply with Holstege’s full request is not only hypocritical for Montgomery, we believe it’s illegal. So today, the ACLU and the ACLU of Arizona sued Montgomery and his office for violating Arizona’s public records law. Judge Damon Keith once said that democracy dies behind closed doors. Montgomery has slammed the door in our faces.

In today’s suit, Arizona law is on our side.

The state’s courts have held that far shorter delays than this one—which now spans over 210 days—violate the public records law. Courts are also clear that the government must demonstrate that it conducted a diligent search and explain why any documents are being withheld. Montgomery and his office have also failed on both these counts.

It seems Montgomery does not want daylight on his data, and it begs the question: does he have something to hide? After all, he has done little to clean up the culture of misconduct within the Maricopa County Attorney’s Office, which was responsible for over half of the prosecutorial misconduct allegations in death penalty cases in the entire state between 2002 and 2013. He vigorously opposed proposed rules requiring prosecutors to disclose more information to criminal defendants, which the Arizona Supreme Court implemented over his objections anyway. According to a recent lawsuit, Montgomery is charging poor Arizonans for access to drug rehabilitation programs, making it harder for poor Arizonans to complete these programs.

An ardent anti-drug crusader, he was recently forced to admit that he was wrongfully threatening medical marijuana patients with felonies. He also has failed to meaningfully demonstrate how he’s disciplined Juan Martinez, a prosecutor with a long history of confirmed misconduct—and it should come as no surprise that he also refused to make records of any internal investigation public.

Finally, further relevant to this case, he even tried to prevent public records disclosures by the Phoenix police, even though he has no control over them. Thankfully, city leaders clapped back, saying Montgomery’s approach “undermines transparency and would likely further strain police-community relations.”

Montgomery’s track record on ignoring prosecutorial misconduct and driving mass incarceration is distinguished. Sadly, his aversion to transparency is not. Nationwide, prosecutors’ offices are among the least open government agencies in the country, despite their immense power over individuals and communities. For example, in a criminal justice system defined almost entirely by plea bargains—over 95 percent of cases end in them—prosecutors control virtually every element of the plea negotiation process, from the charges filed to the terms of the plea to the proposed sentence. Yet almost none of the 2,400 elected prosecutors nationwide voluntarily release data or policies on plea bargaining in their offices. Plus, any data that citizens are able to extract will almost certainly be incomplete, difficult to decipher, and inconsistent across offices, counties, and states.

But prosecutorial transparency, like transparency across government, serves everyone. Voters are more educated. Criminal defendants are better equipped to negotiate deals and prepare for trial. And, as noted by the Phoenix city leaders who opposed Montgomery’s plan to stifle police disclosures, prosecutors themselves can better build community trust, which is essential to their jobs.

More and more prosecutors around the country are waking up to the benefits of transparency and voluntarily disclosing information about their offices. But where they shut the door on democracy—especially by hiding efforts to exacerbate mass incarceration and deepen systemic racism—the ACLU will be the one who knocks. We started today in Arizona.