What Could Stop Eric Holder from Rolling Back the War on Drugs? A US Attorney Fresh out of "Purple Drank" 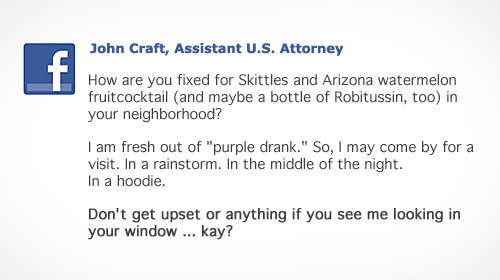 Remember two days ago when Attorney General Eric Holder gave a major, televised speech calling out the US for throwing too many people behind bars? Remember how he questioned the War on Drugs and criticized the racial disparities that plague the criminal justice system by directing federal prosecutors to only pursue the worst punishments for the most deserving individuals?

Well, we can see one problem that might get in his way:

How are you fixed for Skittles and Arizona watermelon fruitcocktail (and maybe a bottle of Robitussin, too) in your neighborhood? I am fresh out of “purple drank.” So, I may come by for a visit. In a rainstorm. In the middle of the night. In a hoodie. Don’t get upset or anything if you see me looking in your window … kay?

Of course, John Craft has a constitutional right to post this statement on his personal Facebook wall. And this statement could be dismissed as the racist ramblings of one individual. But the larger concern is whether Mr. Holder will be able to deliver on the promising proposals he made on Monday if federal prosecutors like John Craft allow their troubling personal views to seep into their work.

One of the saddest realities of the U.S. criminal justice system is the existence of enormous racial disparities at every level, from the use of stop-and-frisk tactics by the police to unfair sentencing linked to mandatory minimums. As Mr. Holder himself said on Monday:

We also must confront the reality that – once they’re in that system – people of color often face harsher punishments than their peers. One deeply troubling report … indicates that – in recent years – black male offenders have received sentences nearly 20 percent longer than those imposed on white males convicted of similar crimes. This isn’t just unacceptable – it is shameful.

It’s encouraging and long overdue for the country’s top prosecutor to speak plainly about the troubling role race plays in our criminal justice system; no federal Attorney General has done so in decades. But we need to acknowledge that the road to real reform is long and that curbing our mass incarceration crisis is going to require some heavy lifting and major cultural change.

For example, Mr. Holder took issue with the harsh mandatory minimums that are sending people to our already overcrowded prisons for far too long – and all too often for nonviolent drug crimes. He said it’s time U.S. Attorneys start taking steps to avoid these mandatory minimums. But here’s the kicker: federal prosecutors already have the discretion to do what Mr. Holder is directing them to do. The trick will be getting them to do it. In other words, actually reducing the number of people subject to outdated and overly harsh mandatory minimums is totally dependent on prosecutors following Mr. Holder’s lead.

Some certainly will. But when we see troubling comments like John Craft’s, we remember that not every federal prosecutor is ready to join the Attorney General in insisting that the criminal justice system avoid the taint of racial bias.

Want to know how to really end mass incarceration? Check out today’s New York Times for an op-ed from Vanita Gupta, director of the ACLU Center for Justice.