Wow! What a Party for International Women's Day!

Yesterday, the 100th anniversary of International Women’s Day, was quite a celebration! The day was marked by events, rallies, marches over bridges, web chats, proclamations, statements, speeches, and parties all over the world. Even Google joined the festivities with a beautiful, multi-colored women-centered masthead! Throughout the day, my inbox was overflowing with Happy International Women’s Day emails from organizations working to secure women’s equality – to end violence against women, to guarantee equal pay for equal work, to ensure educational equity for girls. It was a day marked by pride for the achievements women have accomplished and determination to continue the fight for full equality.

I spent the day in Washington, D.C., where I attended the International Women of Courage Awards Ceremony at the U.S. Department of State. The awards ceremony, hosted by Secretary of State Hillary Clinton, with special guest Michelle Obama, paid tribute to outstanding women leaders worldwide. It recognized their courage and leadership as they fight for social justice, human rights, and the advancement of women. 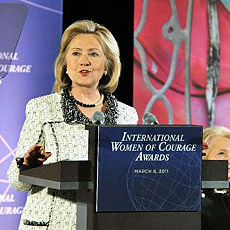 The 10 honorees recognized with this prestigious award included Roza Otunbayeva, President of Kyrgyzstan, who is Central Asia’s first female head of state and head of government in a traditional, majority Muslim country. She rose up as a leader in her country’s second attempt to shed authoritarian rule and has built the first functioning democracy in Central Asia.

Also honored was Henriette Ekwe Ebongo, one of the most influential journalists in Cameroon. Ebongo, a political activist and publisher of Bebela, a weekly independent newspaper, has spent her life advancing freedom of the press, human rights, good governance, and gender equality.

Guo Jianmei, whom I met a few years ago, is China’s best-known female lawyer. She founded the Women’s Law Center at Peking University, and when the university bowed to official pressure and closed the center, established her own law firm where she works tirelessly with a corps of lawyers she trained to bring public interest cases on behalf of women, migrants, and other vulnerable groups.

Two awardees, Nasta Palazhanka, a leader of the opposition youth movement in Belarus, and Yoani Sanchez, a blogger, technological innovator, and civil society leader in Cuba, were prevented by their repressive governments from travelling to the U.S. to receive their awards. These amazing awardees were chosen from among 87 exceptional women nominated by U.S. embassies worldwide for their extraordinary work in advancing human rights. 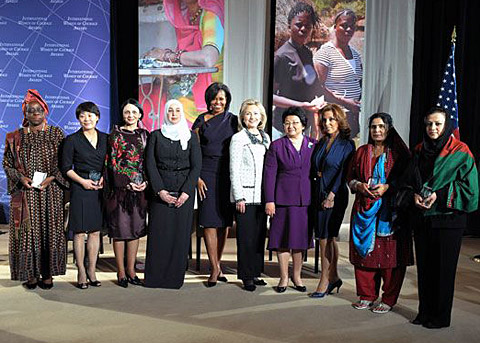 The Dean Acheson Auditorium at the State Department was packed with women from social justice organizations who work daily to improve the lives of women and achieve equality. First, I bumped into my colleague Wendy Patten, a senior policy analyst at the Open Society Foundations, who engages in advocacy on U.S. human rights and civil liberties issues, and later saw my colleague June Zeitlin, who leads the CEDAW Task Force, which is advocating for U.S. ratification of the International Convention for the Elimination of all forms of Discrimination Against Women. It was inspiring to be in a room filled with other women who, like I, have dedicated their lives to the fight for women’s equality.

As the ceremony concluded, this room full of passionate and committed social justice advocates erupted in joyful applause. The ceremony provided us with an opportunity to bask in the glory of the manifold accomplishments of women around the world and re-energized us for the fight ahead. We filed out of the auditorium, friends hugged each other goodbye, then everyone rushed on to the next meeting or back to our offices to continue the critical work of seeking to bring about a world where women can be full equals in all aspects of our lives.

If you want to join the party next year, start today to do your part to bring about gender equality. Work with us as we seek ratification of CEDAW and enactment of the Paycheck Fairness Act in Congress. Support us as we fight gender stereotypes that limit women’s ability to advance their careers and restrict women’s and men’s roles in the family before the Supreme Court. And help us as we advocate in local school districts around the country for equal educational opportunities for girls, including those who are pregnant or parenting young children and those who do not want to be segregated in classrooms apart from boys based on unsupported claims about brain differences between the sexes.

Join with us as we embark upon the next 100 years of fighting for women’s rights!