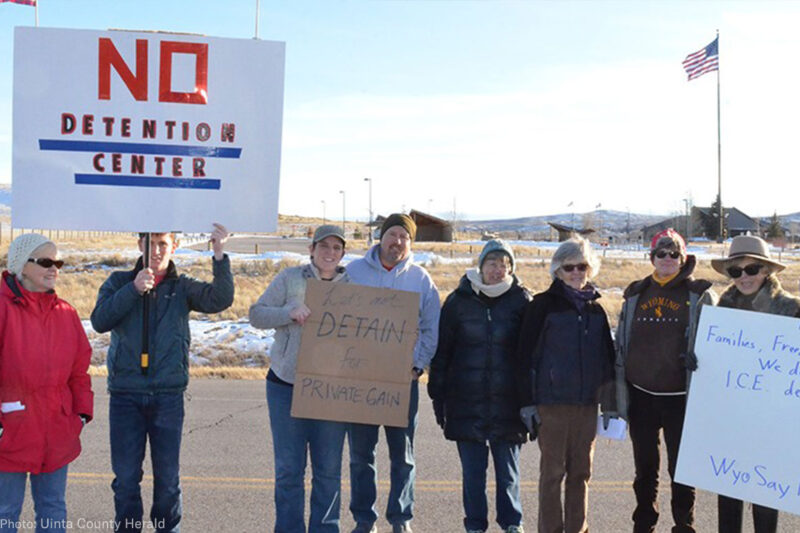 It should have been an ordinary December day for Juan Moreno*. He kissed his wife and kids goodbye in Casper, Wyoming, and left for work. But as Moreno turned the corner, several unmarked cars flashed their lights and pulled him over. Immigration and Customs Enforcement agents then arrested Juan, and he spent the next 22 days locked up in a private, for-profit detention center in Aurora, Colorado. He had no idea when he’d see his family again.

The detention center was a nightmare of poor health care. “I got the flu at the for-profit prison,” says Moreno. “I asked for some medicine, anything to help with my fever. I was freezing and shaking and too hot at the same time. I asked the guards if they could turn up the heat. They laughed and instead told me to go use an extra blanket. They know we only get one blanket.”

Moreno’s family cries every time he comes home now, traumatized by his experiences. In adversity, Moreno has decided to speak out against private-prison companies, like the one that neglected his rights and health. The facility he had been confined in was run by private prison giant CoreCivic, and he did not want to see the inside of another one.

Management and Training Corporation (MTC), the third-largest private prison company in the United States, is currently working to convince local and federal government officials to let them build a 600-bed private immigration prison in the southwest corner of Wyoming. So on a Saturday evening in January, Moreno fought against MTC by sharing his story with hundreds of like-minded Wyomingites committed to stopping inroads by private prisons in their state.

ICE already contracts thousands of beds in privately owned detention centers around the country. They currently plan to build four more. Uinta County, a small, rural county in the corner of Wyoming, is one of the proposed sites. To support this project, MTC has been trying to convince local leaders that their horrifying track record of civil and human rights abuses don’t matter.

We know they do matter. The nightmare stories of private prisons in this nation are legion.

Between 2006 and 2011, MTC was contracted by ICE to manage the Willacy County Correctional Center, then a civil detention center with the capacity to detain 3,000 people. Known as “Tent City” because of the 200-foot-long Kevlar tents, people detained at Willacy described maggot-infested food, mold, rats, and flooding. A 2009 investigation by the Inter-American Commission on Human Rights reported that detainees were not being properly fed and were often given antacids to stave off their hunger.

These horror stories are not new to lawmakers. In June 2009, a former nurse at the facility testified in a congressional briefing that “the level of human suffering [at Willacy] was just unbelievable.” Former MTC employees have revealed that the company encouraged employees to cover up reports of rampant sexual and physical abuse. In 2011, ICE chose not to renew its contract with the company.

Yet despite horrendous accounts like these, MTC finds a way to obscure the negative stories of abuse while exploiting economically vulnerable rural areas like Uinta County.

MTC’s proposal to build new prison facilities in these areas are offered with promises of jobs and economic development. Uinta County officials were told there would be over 100 high-paying jobs created that residents could apply for straight out of high school — the kind of jobs that hearken back to a time when you didn’t need a college degree to make ends meet. Because of these promises, and despite concerns raised by residents, both the city and county passed resolutions in summer 2017 supporting MTC’s request for a contract with ICE.

But Uinta County residents and people across Wyoming are fighting back, organizing under the banner of #WyoSayNo to stop the proposal in its tracks. The coalition, led by Juntos and the ACLU of Wyoming, is building support across the state and around the region to stop the prison’s construction in Uinta County. At the campaign launch on January 13, over 100 people gathered in Cheyenne, Wyoming, to hear Moreno’s story, and local communities around Wyoming held watch parties, viewing the live-streamed online event that to date has been viewed 5500 times.

Wyoming’s residents know the truth. It’s time that governmental officials follow suit and reject MTC’s proposal for what it is: a private prison designed to profit by putting immigrants in Wyoming behind bars.

* Juan Moreno is a pseudonym.