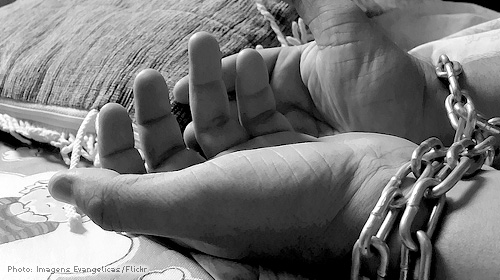 Twenty-three years ago today, the United Nations adopted the landmark International Convention on the Protection of the Rights of All Migrant Workers and Members of Their Families. Subsequently, the General Assembly named December 18 “International Migrants Day,” an occasion to affirm and acknowledge the human rights of migrants all over the world.

In our country, one group of migrant workers faces unique forms of human rights abuses which are directly attached to their visa status – guestworkers (a.k.a temporary workers). In the U.S. government’s H-2B guestworker program, visas tie guestworkers to a single “employer-sponsor” without the ability to change jobs. This makes the worker’s ability to obtain and retain status in the United States entirely dependent on their remaining on good terms with their employer. The programs allows the employer to treat the worker as a disposable commodity, using the labor and then tossing the worker away if the he or she complains about any aspect of their job, seeks to educate other workers about their legal rights, is any way non-compliant with the demands of the employer, or for any reason at all.

Guestworkers are generally afraid to be sent back to their home countries, because they often arrive in the United States saddled with huge debts paid to recruiters for recruitment fees and travel. That debt is often multiplied by high interest rates charged by the loan sharks who workers approach to fund payment for the fees. Because recruiters often misrepresent the terms and conditions of employment opportunities in the U.S., and because our government does not require these foreign recruiters to register or to even agree to follow U.S. law, fraudulent recruiters are often unaccountable for their actions. To make matters worse, the U.S. government has no oversight mechanism to insure that guestworkers are not mistreated after they arrive in the United States or that the contracts that workers sign with recruiters are honored after the workers are here and under the control of their “employer-sponsors.”

There is, unfortunately, no shortage of examples of exploitation and abuse under the program. In just one example, the ACLU and co-counsel represent men from India trafficked through the H-2B guestworker program with recruiters’ and employers’ false promises of green cards and good industrial jobs on the U.S. Gulf Coast. However, when the Indian workers arrived in late 2006 and early 2007, they found themselves living in segregated, overcrowded, guarded labor camps. Our clients were also victims of severe racial discrimination, which led in 2011 to a separate lawsuit by the Equal Employment Opportunity Commission. Sadly, their experience, while horrific, is emblematic of the broader problems with the guestworker program.

The debate surrounding comprehensive immigration reform will likely continue into the next session. As Congress considers legislation, including changes to and a possible expansion of the guestworker program, it must protect civil liberties and human rights and ensure, as we lay out in our recommendations, that under any temporary visa program:

…workers must have the ability to leave abusive U.S. employers and seek employment with other U.S. employers without having to leave the U.S. and return to their country of origin, a path to permanent residency and citizenship (with their families), robust governmental oversight of labor conditions, and enforcement mechanisms verifying that employers comply with the terms of the contract; employers must bear the recruitment/visa processing/travel costs of workers; government must adopt a rigorous and streamlined process to deny visa applications of employers who have violated workers’ rights under prior contracts.

Last week, President Obama issued a proclamation in support of human rights, which called to “reaffirm our unwavering support for the principles enshrined in the Universal Declaration of Human Rights.” But article 23 of the UDHR guarantees everyone “free choice of employment” and “just and favorable conditions of work,” neither of which are enjoyed by guestworkers in the United States.

So, on this International Migrants Day, let us raise our voices and tell President Obama and our government that America cannot continue to have double standards on human rights, one for its rhetoric and one for its actions. America cannot call itself a global leader and at the same time continue an abusive guestworker program that systemically denies rights and exploits workers. Let’s turn presidential proclamations into concrete policy change that protects the rights of the most vulnerable amongst us.