"Give Us Our Books, Don't Treat Us Like Crooks" 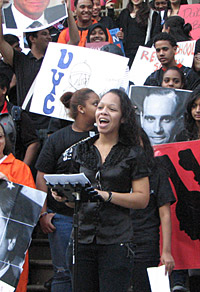 So went the call for change on the steps of New York City Hall. On October 22, folks from the New York Civil Liberties Union and I participated in a rally at City Hall to raise public awareness about and garner support for the Student Safety Act. The rally was attended by over 100 high-school youth active in the Urban Youth Collaborative, a network of community organizations committed to ending overpolicing in New York City public schools and ensuring that our schools are safe places of learning for everybody. Unfortunately, overpolicing in public schools is hardly limited to New York City schools. The school-to-prison pipeline—a term given by advocates to the convergence of harsh disciplinary policies and reliance on police in schools that pushes children out of educational environments and into the juvenile justice system—is a growing problem all over the country.

The brisk autumn weather was a perfect backdrop for a rally that was deeply moving and energizing for everyone involved. After things wound down, I had the chance to talk with 18-year-old Jaritza Geigel, a recent graduate from the Bushwick School for Social Justice, and a speaker at the rally. Jaritza shared her experience with police in her school and performed an original piece of spoken-word poetry. In anticipation of the November 10 hearing on the Student Safety Act, I asked Jaritza to contribute to the Blog of Rights about what the Student Safety Act means to her:

For as long as I can remember, school has always felt like the safest place besides my home. As I grew older, I felt the same way about school until I started to attend a school with metal detectors, scanning, gated windows, and overpolicing.

Initially, I thought maybe the school was housing bad students, but that was certainly not the case. Every morning we were treated like criminals. We had to go through metal detectors, have our bag scanned, have our person “wanded,” take off their shoes, and in some cases we were forced to submit to strip-searches. I felt like there was no mutual respect or trust. My school had all the things necessary for handling inmates, and lacked all the resources necessary for educating students. Students go to school to receive an education, not to be harassed by the school safety agents and cops.

I’ve heard politicians say, “Metal detectors are necessary to ensure your safety as well as the safety of the agents that run them.” But when I go to a school and know that there isn’t accountability or transparency of School Safety Agents’ conduct, how can I possibly feel safe? How can politicians or anyone not in these schools tell me how to feel or tell me what is safe? They can’t, because they don’t have to face this ugly reality on a daily basis.

The students deal with this issue everyday and they will be the ones to make change. To see change, you need to have a vision and others who share in that vision. The Urban Youth Collaborative (UYC) plays a part in helping to make change. We work to empower other students to make change in their schools. We come together regularly to discuss the issues that students face while in school. Out of our discussions, the Student Safety Act came about.

The Student Safety Act would allow transparency so the public can know what is really happening in NYC public schools. Currently, we don’t have access to data regarding searches, suspensions, and arrests based on gender, student status (ESL, Special Ed., etc) race, age, and sexual orientation. We want to know who is being targeted and for what reason. Many times, School Safety Agents, security officers employed by the NYPD, respond harshly to students’ noncriminal and minor offenses in the school. Students have been arrested for simply wearing a hat, because it was against school policy. All we want is to go to school to receive an education, but instead, students deal with continual harassment and have our rights violated.

We all want students to feel safe in their schools, but students need to know that people will be held accountable for their actions, in the same way we are held accountable for ours. We have been working on this act for the past 1 1/2 to 2 years. We have held student actions, press conferences, and spoken with city council members, including City Council Speaker Christine Quinn about why it is important that this bill is passed. I am just one out of 8,000 students that supports the Student Safety Act.

It has been a long fight. A lot of time, energy, negotiation, laughter, and tears have gone into this bill, and I believe it will all be worth it. Seeing young people empower each other to bring about change is a reward in itself. We have our hearing on November 10. This is our time. Our victory on behalf of students across the city.

Urban Youth Collaborative is made up of five core organizations: Desis Rising Up and Moving, Future of Tomorrow of Cypress Hills Local Development Corporation, Make the Road New York, Sistas and Brothas United of The Northwest Bronx Community and Clergy Coalition, and Youth on the Move of Mothers on the Move.