An MRAP Is Not a Blanket 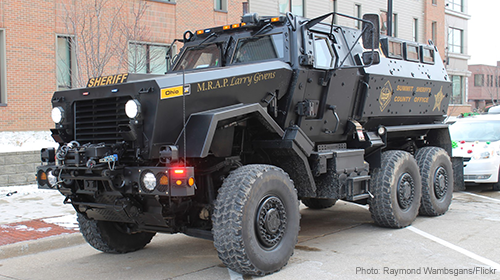 This August, Americans watched in horror as the police descended on peaceful protesters in Ferguson, Missouri, as though they were going into battle. In May, a toddler named Bou Bou Phonesavanh had his chest ripped open and his face torn off by a flashbang grenade that police officers in Georgia threw into his crib during a paramilitary raid. Though these incidents shocked many Americans, police militarization isn’t new. The American siege on communities of color has been going on for a very long time.

In a report released earlier this year, the ACLU showed that the militarization of American policing has been fueled in part by federal programs that funnel military equipment and money to local police departments. One such program, known as the “1033 program,” allows the Pentagon to send local police departments, free of charge, military weapons such as M-16s and armored personnel carriers like MRAPs (Mine Resistant Ambush Protected vehicles). The Pentagon has sent over $5.1 billion dollars’ worth of military equipment to American police departments since this program was created in the 1990s.

Finally, it looks like the federal government might do something about this problem. Yesterday, the Obama administration released a report summarizing its review of the federal programs that fuel police militarization. The report contains several recommendations that might limit the ability of local police to treat American communities like warzones, such as requiring local review of police requests for Pentagon equipment, ensuring better training, and mandating after-action reports for incidents involving local police use of military equipment.

The most important recommendation would limit the kinds of military-grade weaponry that the Pentagon can give away free to police departments nationwide. The report, however, doesn’t specify what military equipment should be prohibited. MRAPs and flashbang grenades, at a minimum, would be a good start.

These would all be positive developments, but the administration must also make sure that it takes a deep and hard look at the dangers associated with militarized policing.

The report notes that 96 percent of the equipment the Pentagon gives away to local police is “non-controlled” (like commercial vehicles, office furniture, blankets, and forklifts), and only four percent of 1033 equipment is “controlled” (like assault rifles, armored personnel carriers, and aircraft). These statistics are misleading for two reasons. First, four percent of 1033 equipment turns out to be a pretty big number: There are 460,000 pieces of controlled military equipment currently in the possession of police departments across the country.

Second, to arrive at that calculation, the Obama administration counted each piece of equipment transferred under the program as a single item and gave each item equal weight, instead of taking into account how lethal (or costly) the different kinds of equipment are. For example, it gave one blanket the same weight it gave one MRAP. But these items are not equal—an MRAP is not a blanket.

We should also be realistic about the ability of training to solve the problem of militarized policing. The report correctly notes that many police departments that receive military equipment from the Pentagon are not properly trained to use it. This fact was made glaringly apparent in Ferguson, such as when police snipers trained their rifles on peaceful protesters, and it must be addressed.

But we have to ask ourselves whether training is really the root of the problem here. Police departments across the country continue to aggressively and dangerously police communities of color, sometimes without carrying military equipment. Proper training in the use of military gear won’t help as long as the warrior mindset pervades policing and as long as black and brown bodies are seen as “threatening.”

Finally, as the report emphasizes, oversight is important—but oversight of what?

Today, most federal oversight of these programs comes in the form of inventory monitoring. History shows that monitoring of 1033 equipment should be improved—a Pentagon spokesperson testified last month that 421 military weapons have gone missing from the program, including M16s and M14s, and that that he “wouldn’t be surprised” if local police were selling military Humvees for their own profit. But we need oversight of the use of this equipment as well. If local police are going to receive military weapons at all, the federal government has an obligation to put some reasonable constraints on how they are able to use them.

President Obama has given his administration 120 days to develop an executive order containing concrete reforms. In the meantime, the administration should do what tens of thousands of Americans have already demanded, and place a moratorium on the 1033 program. We cannot risk any more incursions like Ferguson or the maiming of Bou Bou Phonesavanh.