The Most Conservative Principle in American Politics 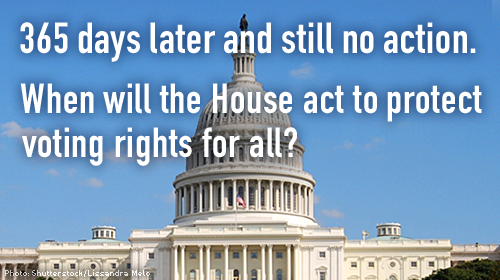 “The right to vote is at the very foundation of our American system, and nothing must interfere with this very precious right.”
– President Gerald Ford

“[T]he right to vote is the crown jewel of American liberties, and we will not see its luster diminished.”
– President Ronald Reagan

“The right of ordinary men and women to determine their own political future lies at the heart of the American experiment, and it is a right that has been won by the sacrifice of patriots…. The amendments to our Constitution that outlawed slavery and guaranteed the right to vote came at the price of a terrible civil war. The Voting Rights Act that broke the segregationist lock on the ballot box rose from the courage shown on a Selma bridge one Sunday afternoon in March of 1965.”
– President George W. Bush

Despite the seeming gridlock in Congress today, we have a long history of our elected leaders’ commitment to voting rights transcending party politics. There is no value so fundamental, so basic, indeed, so conservative as making sure our citizens can participate in the lifeblood of democracy – voting.

Since 1965 Congress has passed, extended, and reauthorized the landmark voter protection bill known as the Voting Rights Act (VRA) by overwhelmingly bipartisan votes. In fact, Republican presidents signed the last three extensions of the VRA, ensuring continuous protection for all Americans.

It is that history of support for the Voting Rights Act that makes it so particularly discouraging that the new bipartisan legislation to modernize the act, led by Rep. Jim Sensenbrenner (R-Wis.), Rep. John Conyers (D-Mich.), and Sen. Patrick Leahy (D-Vt.), has not moved forward in the House of Representatives. Today is the one-year anniversary of the Supreme Court’s devastating decision in Shelby County v. Holder, in which the Court found the coverage formula of the Voting Rights Act – one of the key provisions of the VRA – unconstitutional. The Voting Rights Amendment Act of 2014 would address this decision, but House Judiciary Chairman Bob Goodlatte (R-Va.) has not yet held a hearing to review the bill, which would pave the way for a vote in the House. This legislation would protect voters in states that engage in recent and repeated acts of discrimination and provides stronger enforcement tools nationwide.

Recently, conservative commentators have urged passage of the legislation. Armstrong Williams, a well-known conservative voice, wrote that “without the Republican Party, voting rights would have never been protected in this country.”

All members of Congress have an obligation to protect every citizen’s right to vote. Every day that Congress fails to move the Voting Rights Amendment Act gives those who would deny that right a free pass. As he signed the VRA in 1982, President Reagan commented on the bipartisan process that got the bill to his desk:

Yes, there are differences over how to attain the equality we seek for all our people. And sometimes amidst all the overblown rhetoric, the differences tend to seem bigger than they are. But actions speak louder than words. This legislation proves our unbending commitment to voting rights. It also proves that differences can be settled in a spirit of good will and good faith.

We urge the House Judiciary Committee to heed this wise advice today.