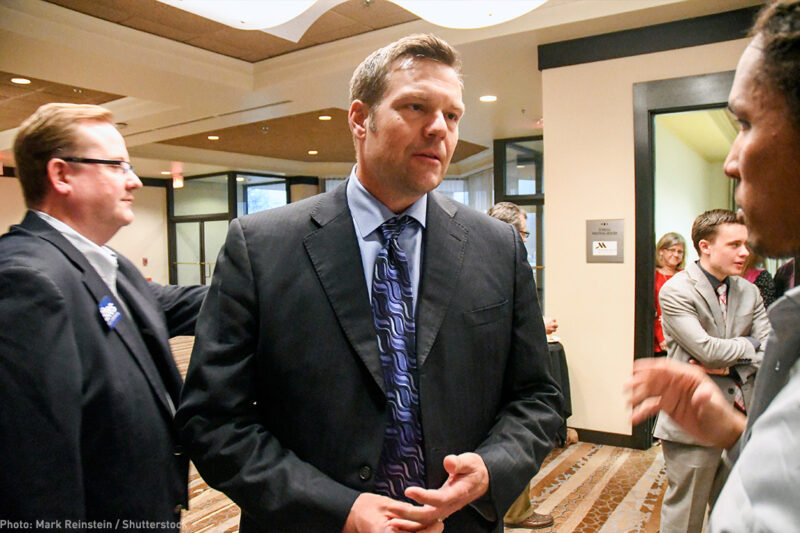 Donald Trump is obsessed with proving that voter fraud is a huge problem in the United States, not only to justify his false claim that he won the popular vote but also, and more importantly, to legitimize an attack on voting rights.

To do this, Trump has turned to Kris Kobach, Kansas’s secretary of state and a longtime opponent of voting rights. He tapped Kobach to lead a voter fraud commission that has drawn scrutiny for trying to collect personal data about every voter in the country, promoting blatant falsehoods about supposed instances of voter fraud in the 2016 election, sanctioning voter suppression, and operating in secrecy in violation of federal law.

While Kobach attempts to attack the right to vote, the ACLU is taking the fight to him. On Oct. 1, People Power is launching the Let People Vote campaign in Lawrence, Kansas. This is a movement that will work in all 50 states and the District of Columbia to promote voting rights and increased election participation. In advocating for the protection and expansion of voting rights, People Power activists will be combating Kobach’s destructive policies that brought chaos to his home state.

In Kansas, tens of thousands of citizens were prevented from registering to vote after Kobach pushed through new and onerous registration barriers. The ACLU took Kobach to court over his disenfranchisement scheme and won. Judge Jerome Holmes of the Court of Appeals for the 10th Circuit, a George W. Bush appointee, warned that Kobach’s policies amounted to “the mass denial of a fundamental constitutional right.”

Kobach also tried to create a two-tiered election system to prevent thousands of voters from casting ballots in state and local elections, but that was also stopped by the courts.

When he went on a quest to find non-citizens who had voted, he was only able to convict one person for voting without citizenship: a foreign national who at the time was in the process of naturalization and is now a citizen.

Kobach’s prized Crosscheck program, which ostensibly is meant to bar people from being registered to vote in more than one state, is so defective that a team of researchers at Microsoft, Harvard, and Stanford found that it “would eliminate about 200 registrations used to cast legitimate votes for every one registration used to cast a double vote.”

But none of this has stopped Kobach from continuing to push bogus election fraud myths and suppressive voting policies.

While Kobach consistently misleads the public about voter fraud, his record of dishonesty has caused him legal trouble. In one voting rights case brought by the ACLU, Kobach was fined for making what U.S. Magistrate Judge James P. O’Hara called “patently misleading representations to the court” about documents he took to a meeting with Trump.

It is no wonder that Kobach is attacking Let People Vote, telling the Topeka Capitol Journal that the “campaign should be entitled ‘Let People Vote Without Showing Photo ID.’ Kansans overwhelmingly approve of our election security measures.”

Kobach’s work has never been about “election security.” His aim is mass voter disenfranchisement and suppression. The Let People Vote campaign might be Kris Kobach’s nightmare, but it will be vital for ensuring that voters are allowed to exercise their constitutional rights.

Want to expand access to the ballot and make our democracy more representative? Get involved. Host a watch event or attend a watch event on October 1 for the Let People Vote campaign. Not available on October 1? Sign up for updates here.