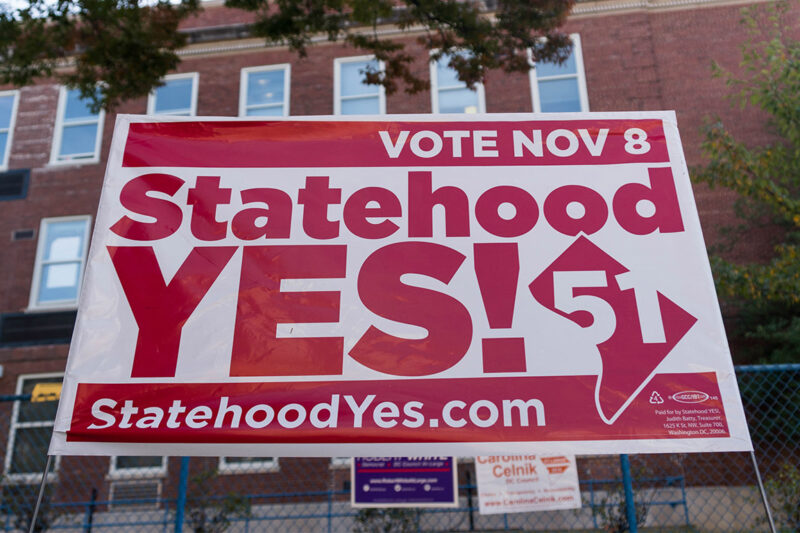 Five years ago, I left the state of Idaho to become a resident of Washington, D.C. I now live in a vibrant community with people who work hard, not just as federal workers but also as teachers, doctors, mechanics, and small business owners. We raise families, go to church, enlist in the military, hang out with our neighbors, and volunteer in the community. And we pay taxes, a lot of taxes: more than the residents per capita than in any state.

Just like you find in many states, some of my neighbors have lived in D.C. for generations and some, like me, are newer transplants.

But one thing sets us apart: we’re not a state. And we have no voting representation in Congress.

Listen to the podcast: The Case for D.C. Statehood

When Gallup released a poll on Monday revealing 64 percent of those polled don’t think D.C. should be a state, we were a little hurt, but not surprised.

Not surprised because the fact is, we think most Americans don’t know that the people who live in D.C. ― more than 700,000 of us ― don’t have voting members of Congress. When asked in a 2005 poll if D.C. citizens should have equal voting rights in the House and Senate, a whopping 82 percent said yes. Because when it comes to having a say on big national issues that affect all Americans, like health care, military spending, immigration, national security, and the economy, you would think the residents of our nation’s capital would have just as much a say as any other voter in the country.

But in D.C., “taxation without representation” isn’t just a throwback slogan from the days of the American Revolution. It’s an everyday reality for us.

It will surprise few that our lack of a vote in Congress has racist roots. In the early days of the District, black men won the right to vote in 1867, only for it to be taken away in 1874 by a Congress that wanted to limit the power of the new black electorate. In 1891, Sen. John Tyler Morgan of Alabama proclaimed stripping the vote was necessary to “burn down the barn to get rid of the rats…the rats being the negro population and the barn being the government of the District of Columbia.”

This affects the lives of District residents on a daily basis. As a “federal district,” D.C. lacks complete autonomy over its laws and budget, so members of Congress, none of whom were elected by D.C. voters, can strike down or repeal laws they don’t like. It would seem preposterous to anyone outside D.C. to imagine a politician with no local knowledge of your state, who spends less than half the year there, has no stake in the welfare of your communities, and is not accountable to its voters, could change your state’s laws on a whim. No other state would permit this kind of federal control.

And yet, this is a regular occurrence in D.C., often with devastating results. In the late 90s, Congress prevented the District from responding fully to the HIV/AIDS crisis by restricting D.C.’s ability to institute a needle exchange program, resulting in needless deaths. Those seeking abortion care, domestic partner benefits, and medical marijuana treatment have also been victims to the whims of Congress.

This oppression will continue unless we achieve statehood.

We’re counting on the rest of the country to help us right this wrong. You can exercise the representation we lack by contacting your members of Congress and telling them to support D.C. statehood. Tell them you see this injustice for what it is: voter suppression, plain and simple.

Equal representation is fundamental to American democracy. No matter what political party you’re in, that’s something we can all agree on.