The Fight to Take Back Our Genes Moves to Canada 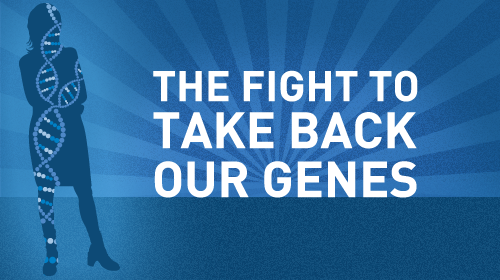 The fight against gene patents has migrated north.

In the first challenge to gene patents in Canada, the Children’s Hospital of Eastern Ontario earlier this week brought suit against the University of Utah for trying to claim monopoly ownership of what they couldn’t possibly have created: parts of our genome.

The genes at the center of the controversy are associated with Long QT Syndrome, which causes abnormal, life-threatening heart rhythms. Children who inherit certain genetic mutations often die suddenly from the condition, unless they receive appropriate genetic testing and therapies.

The case in Canada seeks to replicate our success defeating gene patents at the U.S. Supreme Court in 2013. Both governments have granted thousands of patents on human genes over the years, often to American companies and universities. Until the court’s ruling last year, these patents blocked medical and scientific work here at home.

The University of Utah first obtained its Long QT gene patents in the United States in 1997, after conducting studies with U.S. federal funding. It initially licensed its rights to a U.S. company that did not develop a genetic test for the disorder. But because it had rights to the genes, the company could stop anyone else from studying or examining the genes and sued another U.S. laboratory that was offering a Long QT test to the public.

For two years, there was no genetic testing for Long QT Syndrome offered in the United States because of gene patent disputes. During that period, doctors could not test patients whom they suspected of having genetic mutations and thus could not prescribe effective therapies. Sadly, that was the experience of Abigail, a 10-year-old American girl who reportedly died from undiagnosed Long QT Syndrome.

That all changed last year, when the U.S. Supreme Court unanimously struck down patent claims on two genes connected to hereditary breast and ovarian cancer in Association for Molecular Pathology v. Myriad Genetics – the lawsuit filed by the ACLU on behalf of 20 scientific and health organizations, geneticists, and patients against patent holders Myriad and the University of Utah. The court concluded that a gene cannot be patented by the first company to decipher its code, because it remains a product of nature. By doing so, the nine justices ensured monopolies couldn’t arise in the United States around genetic testing, thereby dismantling the barriers to patient care, competition, and innovation caused by gene patents. (Myriad, however, still hasn’t gotten the message.)

But many American companies and universities procured patents in other countries, such as Canada, on the same genes they patented in the United States, and the effects are no less devastating.

When the Canadian government was considering whether to approve Children’s Hospital as a Long QT Syndrome testing provider, it received a threatening letter from PGx Health, a U.S. company that had acquired rights to Long QT through the University of Utah. As a result, the government did not permit Children’s Hospital or any other facility in Canada to offer these tests to their patients.

So while patients in the United States have access to testing for Long QT Syndrome through six laboratories in the wake of the Supreme Court decision, Canadians must send samples to the United States to be tested, at a cost of more than $4,000 per test. The hospital’s lab could perform the test for about $1,500 using advanced genetic sequencing techniques, if it was allowed to do so. The lawsuit filed this week by the hospital against the University of Utah and two patent co-owners aims to lift these restrictions so that it can offer more comprehensive testing options and second opinions to patients.

The Canadian court should follow the U.S. Supreme Court’s lead. Patents on human genes should not determine which patients are able to access life-saving genetic testing, regardless of where they live. Nor should gene patent holders dictate what tests, therapeutics, and other applications can be developed (and even patented) from the discovery of our genetic code.

We all benefit when geneticists around the globe can provide medical care and conduct research without fear of patent infringement liability. Medicine should win out over monopoly, here, there, everywhere.