What Breastfeeding Has to Do With Economic Security 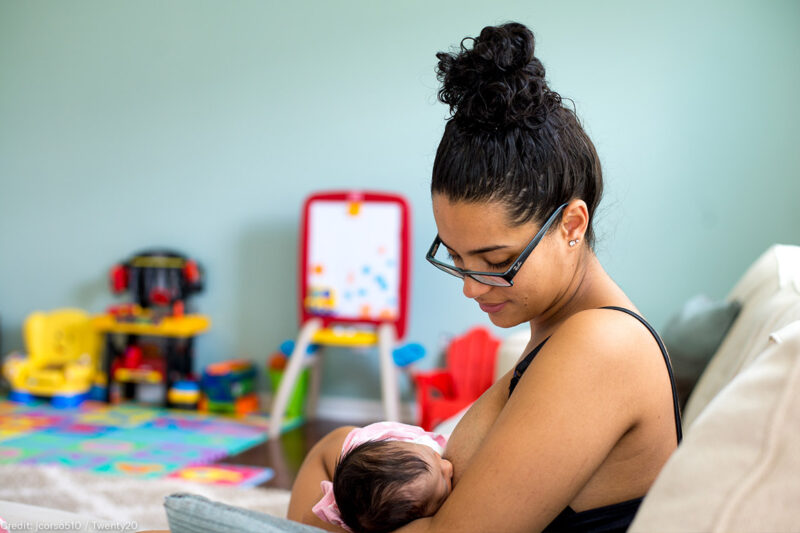 The discrimination began almost immediately after Barbara, an emergency room nurse, returned from maternity leave. Like most breastfeeding parents, Barbara needed to pump regularly to keep up her milk supply and prevent infection. But while her co-workers got smoke breaks, Barbara wasn’t allowed to take time to pump, leaving her in pain: “I’d feel like my breasts [were] bursting,” she said.

When she did get breaks, Barbara found herself expressing breast milk for her baby “next to bedside trays that had dried blood.” When she finally stood up for herself, Barbara’s manager bullied her until she quit. “It just became too much,” she said. “It affected my home life. It affected my baby. My milk supply dropped. It was spiraling downhill.”

Barbara’s experience is far too common. In “Exposed: Discrimination Against Breastfeeding Workers,” we found that two-thirds of breastfeeding discrimination legal cases from the last decade ended in job loss, either because the worker was fired or, like Barbara, forced to resign.

Low-wage workers have a particularly difficult time getting the breastfeeding accommodations they need. They are only half as likely as middle-income earners to have access to the time and space needed to pump at work. Job loss can be devastating for these workers’ families. Marina, a taqueria cashier who worked for $7.55 per hour, was fired after her manager learned she breastfed her baby in her car during a break. Without a steady income, the mother of four was forced to take loans and to rely on family donations and food boxes from her church.

Breastfeeding discrimination’s economic impact is made worse by the fact that it reinforces other forms of discrimination that keep women earning less than men. Bias against mothers is one of the primary drivers of the gender wage gap. Mothers are judged to be less competent, they’re less likely to be hired or promoted, and they’re paid less. And expressing breast milk draws attention — via noisy pumps, bags of milk in the company fridge, and time away from work duties — to an employee’s motherhood role.

Breastfeeding discrimination also forces women out of male-dominated occupations, which tend to pay more highly than female-dominated ones. Even though only 16 percent of women work in predominantly-male industries, we found that close to half (43 percent) of breastfeeding discrimination cases are brought by women from those sectors. Our research turned up women working in law enforcement, construction, engineering, and the military who were pushed out of their jobs because of breastfeeding.

“No one should have to choose between being the mom she wants to be and pursuing the career she loves,” said flight attendant and ACLU client Jo Roby, who recently filed a breastfeeding discrimination charge against Frontier Airlines.

But for too many women, the health consequences of breastfeeding discrimination are too much to bear, and they’re left with no choice but to resign. Breastfeeding workers who are not permitted to express breast milk as needed face illness and infections, and many are pressured to wean their babies earlier than their doctors recommend. One New York Police Department officer, Simone Teagle, developed mastitis and had blood in her milk from waiting so long to pump. Others lose their milk supplies completely.

Some face sexual harassment. Because pumping often draws attention to workers’ breasts and bodies, it makes them vulnerable to offensive remarks or other hostilities, like commenting on their “tits,” comparing them to animals, and “mooing” at them. One worker’s supervisor mimed grabbing and squeezing her breasts during a company meeting.

Fortunately, where breastfeeding workers had no legal rights only a decade or two ago, they now have many.

Courts have recently begun interpreting Title VII of the Civil Rights Act to prohibit breastfeeding discrimination. A different federal law, the Break Time for Nursing Mothers provision of the Affordable Care Act, requires employers to provide most hourly workers with as-needed breaks and private non-bathroom space to pump breast milk and prohibits retaliation. And over half of all states have laws that provide some breastfeeding rights at work.

Despite this progress, the laws remain an incomplete patchwork. Title VII cannot be reliably counted on for accommodations like break time and space. And due to technicalities, the Break Time for Nursing Mothers law leaves out millions and is nearly impossible for workers to enforce in court.

Worker-protective lactation laws — like the model policy outlined in the Center for WorkLife Law’s new report — advance women’s economic security by ensuring parents can earn a living. Without effective federal protections, our research found 27.6 million women of childbearing age (73 percent) do not have the basic protections needed by all breastfeeding workers. And that’s 27.6 million too many.