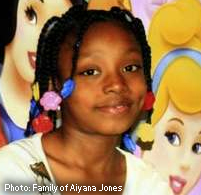 Confused after throwing a deafening and blinding "flashbang" into a home, police mistakenly shot and killed a sleeping seven-year-old girl. Seven-year-old Aiyana Jones was sleeping on the couch next to her grandmother in their Detroit, Michigan home when a SWAT team threw a flashbang through the window, which landed on her blanket. Seconds after Aiyana's blanket caught fire, the SWAT team stormed through the door, and mistakenly shot Aiyana through the neck, killing her. Flashbangs, developed for wartime raids, have caused severe burns, set homes on fire, induced fatal heart attacks, and confused police officers into thinking they are under gunfire.