Introduction
More than an estimated 15,269 [1] Americans have been executed since the inception of the death penalty dating back to colonial times. The sanction of death for the punishment of a murder in the United States has declined in recent years. In 2009, the number of new death sentences was 112 [2], the lowest level in 30 years. Still, the United States remains the only advanced Western democracy that fails to recognize capital punishment as a profound human rights violation and as a frightening abuse of government power.

The U.S.'s capital punishment process:
(1) is fraught with error;

(2) discriminates on the basis of socioeconomic status, race, and geography;

(3) is arbitrary and capricious, including its use against the mentally ill and defendants who did not kill anyone and did not intend that anyone be killed;

(5) does nothing to protect people from crime;

(7) is plagued by cheap legal representation - the worst, not the best, of American lawyering; and

(8) greatly diminishes the worldwide stature of the United States and its ability to work to end human rights violations in other countries.

The Impact of the Death Penalty
The Death Penalty Kills the Innocent:
Since 1973, 138 death-row prisoners have been released because they were innocent. In addition, at least ten people have been executed since 1976 even though they were probably innocent [2] Wrongful convictions often result from false confessions, which are frequent among people with mental retardation, mistaken eyewitnesses, jail house snitches, junk science and prosecutorial abuse.

The Death Penalty is Racially Biased and Punishes the Poor:
Defendants who kill white people are far more likely to get the death penalty than those who kill black people. Most defendants are poor and are forced to depend on incompetent or token representation. Some lawyers have slept or appeared drunk during trials.

The Death Penalty is Unfair:
The death penalty has never been applied fairly across race, class, and gender lines. Who is sentenced to die often depends on the attitudes of prosecutors, where one is tried, the prejudices of judges and juries, and the abilities and commitment of defense attorneys.

The Death Penalty Cost More than Life in Prison:
Prosecuting a death penalty case is extremely expensive for a state and drains money that could be used for education and social programs. Capital punishment costs more than sentencing a prisoner to life without parole. The most comprehensive death penalty study in the country found that the death penalty cost North Carolina $2.16 million more per execution over the costs of sentencing murderers to life imprisonment. The majority of these costs occur at the trial level. In its review of death penalty expenses, the State of Kansas concluded that capital cases are 70 percent more expensive than comparable non-death penalty cases, including the costs of incarceration. [4]

The Death Penalty is Not a Deterrent to Crime:
Since 1977 over 80 percent of all executions have occurred in the South, the region with the highest murder rate. The Northeast, the region with the lowest murder rate, has accounted for less than 1 percent of the executions. Although the issue of deterrence has been studied extensively, there is no credible evidence that capital punishment deters murder or makes us any safer.

Important Supreme Court Cases
Arbitrary
Furman v. Georgia (1972): The Supreme Court declared the death penalty unconstitutional, as cruel and unusual punishment in violation of the Eight Amendment, and finding that the administration of the ultimate punishment was arbitrary and capricious. Many states responded to this landmark decision by changing their sentencing schemes in failed attempts to make the death penalty more rational and consistent.

A Broken System
Gregg v. Georgia (1976): This case defines the beginning of America’s modern era of the death penalty. When the Supreme Court reinstated the death penalty in 1976 by upholding new statutes in Georgia, Florida, and Texas, the Court in effect declared that all the problems that it had recognized four years earlier were now solved. In fact, it is now clear, three decades later, that Gregg has not lived up to its promise. The death penalty remains arbitrary and capricious. Defendants continue to be convicted and sentenced to death based on such arbitrary factors as: their socioeconomic status and the socioeconomic status of the victim; their race and the race of the victim; where the crime occurred; or the poor quality of their counsel. Many death row inmates clearly suffer from mental retardation or mental illness. Even more dramatically, 123 people have been released from death row in recent years because they were wrongfully convicted.

Death Penalty Disproportionate for Rape
Coker v. Georgia (1977): The Supreme Court ruled that the use of the death penalty in rape cases is unconstitutional because the sentence is disproportionate to the crime. The Coker case resulted in the removal from death row of 20 inmates - three whites and 17 blacks.

Consideration of Mitigation Factors
Woodson v. North Carolina (1976): The state of North Carolina enacted legislation that made the death penalty mandatory for all convicted first-degree murderers. Consequently, James Woodson was found guilty of such an offense and automatically sentenced to death. Woodson challenged the law, which the Supreme Court held that the statute failed to allow consideration of the character and record of an individual. The Court noted that “the fundamental respect for humanity” underlying the Eighth Amendment required such considerations.

Lockett v. Ohio (1978): An Ohio statute required that individuals found guilty of aggravated murder be sentenced to death. Sandra Lockett had encouraged and driven the getaway car for a robbery that resulted in the death of a pawnshop owner and was sentenced to death under this statute. The Supreme Court held that the statute was unconstitutional due to the fact that it did not allow the sentencing judge to consider mitigation factors in capital cases, which is required by the Eighth and Fourteenth Amendments.

Racial Bias
McCleskey v. Kemp,(1987):Counsel for an African-American prisoner sentenced to death for killing a white police officer showed through sophisticated statistics that death sentences in Georgia were racially biased based on the race of the victim. The Court ruled that, despite such imperfections, these racial disparities did not constitute a violation of the constitutional right of "equal protection of the law." Warren McCleskey was executed by electrocution in 1991.

Death Penalty for the Mentally Incompetent
Ford v. Wainwright,(1986): The Supreme Court prohibited the execution of the mentally insane and required an adversarial process for determining mental competency.

Death Penalty in Felony Cases
Tison v. Arizona, (1987): In this case, the Supreme Court held that defendants can be executed even if they did not kill anyone and did not intend that anyone be killed.

Due Process
Ring v. Arizona,(2002):The Supreme Court ruled that the Sixth Amendment right to a jury trial requires that juries, not judges, determine all factors required to be found before a defendant is eligible for a death sentence. This decision does not apply retroactively.

Death Penalty Disproportionate for People with Mental Retardation
Atkins v. Virginia, (2003): The Supreme Court found that executing mentally retarded offenders is cruel and unusual punishment prohibited by the Eighth Amendment of the Constitution.

Death Penalty Disproportionate for Juveniles
Roper v. Simmons, (2005): The Supreme Court held that the Eighth and Fourteenth Amendments forbid execution of offenders who were under the age of 18 years old when their crimes were committed. The Court’s ruling affected 72 juveniles in 12 states.

Death Penalty in Doubtful Cases
Kansas v. Marsh, (2006): A divided Supreme Court upheld a Kansas death penalty statute, rejecting arguments that the statute was unconstitutional because it created a presumption in favor of the death penalty for convicted murderers. Noting that at least 123 people have been wrongfully convicted and sentenced to death since 1977, dissenters thought the law to be “morally absurd” and in defiance of “decades of precedent aimed at eliminating freakish capital sentencing in the United States.” According to the dissenters, the Constitution forbids a mandatory death penalty in “doubtful cases.” However, a majority of the Court disagreed.

STATE CAPITAL PUNISHMENT LEGAL PROCESS
The state administration of the death penalty is complex. Each state practicing capital punishment has different laws regarding its methods and crimes that qualify. Typically, it involves four critical steps: Sentencing, Direct Review, State Collateral Review, and Federal Habeas Corpus. Below is a flowchart. 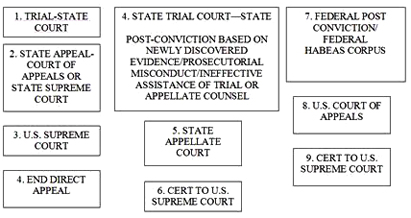