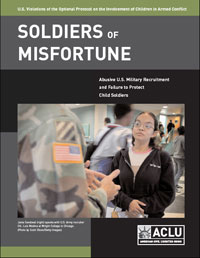 The United States is shirking its commitment under an international agreement and failing to protect the rights of children under 18. In this report to the U.N. committee on the Rights of the Child, the ACLU charges that the U.S. is not upholding its obligations under the Optional Protocol on the Involvement of Children in Armed Conflict that it ratified in 2002.

Soldiers of Misfortune focuses on the U.S. military’s recruiting tactics that target children as young as 11 and disproportionately target low-income youth and students of color. The report also demonstrates that the United States fails to observe minimum safeguards for recruitment of youth under 18 as required by the Optional Protocol, recruiting children without parents’ consent and exposing youth to heavy-handed recruitment tactics and misconduct by recruiters, including coercion, deception, and sexual abuse. It further details the U.S. government’s failure to protect the rights of foreign alleged child soldiers such as Guantánamo detainees Omar Khadr and Mohammed Jawad, and the denial of asylum protection to vulnerable former child soldiers who cannot safely return to their home countries.

20th Anniversary of the Convention on the Rights of the Child