INDIANAPOLIS — Seeking to delay the federal execution of Wesley Purkey later this month, the American Civil Liberties Union and Ropes Gray LLP sued Attorney General William Barr and other federal officials today on behalf of Reverend Seigen Hartkemeyer, a Buddhist priest who has ministered to Purkey for over a decade. Rev. Hartkemeyer is religiously obligated to attend Purkey’s execution — scheduled for July 15 — but doing so would put his health and life at severe risk due to the COVID-19 pandemic.

Purkey’s execution is the second of three that the government has scheduled back to back later this month, despite a global pandemic. If carried out, these will be the first federal executions in 17 years. The executions threaten to become “super-spreader events” for COVID-19: Each execution will require the travel and congregation of hundreds of people, including correctional officers, local and national media, legal counsel from around the country, witnesses, victims’ family members, and others. The Terre Haute prison at which Purkey’s execution is set to take place is currently dealing with a COVID-19 outbreak.

“The fact that the federal government has scheduled these executions now, during a pandemic when COVID-19 cases are surging around the country, is appalling,” said Cassandra Stubbs, director of the ACLU’s Capital Punishment Project. “Nine of the top 10 hotspots for COVID-19 are in prisons. Asking hundreds of people from around the country to go to Indiana right now to attend this execution is like asking them to run into a burning building. We haven’t had a federal execution in 17 years: There is absolutely no reason for the government to rush forward with such a reckless and dangerous plan.”

Rev. Hartkemeyer — who is 68-years-old and has lung-related illnesses that make him particularly vulnerable to COVID-19 — has been designated as a witness to Purkey’s execution. Federal regulations mandate that such designated witnesses be present at the execution. The lawsuit charges that scheduling this execution now — and forcing Rev. Hartkemeyer to risk his health and life to perform his religious duties as Purkey’s priest — violates the Religious Freedom Restoration Act.

“As Mr. Purkey’s priest for the last 11 years, I have a religious obligation to be present at his execution to ease his crossover from this life,” said Rev. Hartkemeyer, the plaintiff in this case. “I should not have to risk my health and life to perform my sacred priestly duties. We must ask ourselves how much we are willing to sacrifice to enable the government to perpetuate a cycle of killing.”

“Trump officials claim to champion religious freedom, yet once again have no qualms about trampling those rights when it suits their political agenda,” said Heather L. Weaver, senior staff attorney for the ACLU’s Program on Freedom of Religion and Belief. “There is no reason to resume federal executions during a pandemic, especially when it would keep a priest from performing his religious commitments to a man about to lose his life.”

Today’s lawsuit was filed in the U.S. District Court for the Southern District of Indiana. In addition to Attorney General Barr, the complaint names as defendants Michael Carvajal, director of the Bureau of Prisons, and T.J. Watson, the warden of the Terre Haute federal correctional complex. Rev. Hartkemeyer asks the court to delay Purkey’s execution until an effective treatment or vaccine for COVID-19 is available.

The complaint is online, here.
A blog from Rev. Hartkemeyer can be found, here. 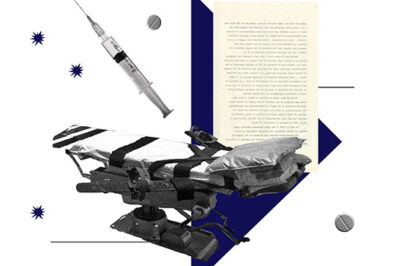