The Persistence Of Racial And Ethnic Profiling In The United States

A Follow-Up Report To The U.N. Committee On The Elimination Of Racial Discrimination 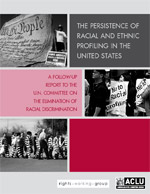 Racial profiling is a violation of human rights. Both Democratic and Republican administrations have acknowledged that racial profiling is unconstitutional, socially corrupting and counter-productive. However, in the 21st century, despite the United States’ obligation to comply with the human rights standards and protections embodied in the International Convention on the Elimination of All Forms of Racial Discrimination (ICERD), the practice of racial profiling by members of law enforcement at the federal, state, and local levels remains a widespread and pervasive problem throughout the United States, impacting the lives of millions of people in African American, Asian, Latino, South Asian, Arab and Muslim communities.

Data and anecdotal information from across the country reveal that racial minorities continue to be unfairly victimized when authorities investigate, stop, frisk, or search individuals based upon subjective identity-based characteristics rather than identifiable evidence of illegal activity. Victims continue to be racially or ethnically profiled while they work, drive, shop, pray, travel, and stand on the street.

A major impediment to the eradication of racial profiling remains the continued unwillingness or inability of the U.S. government to pass federal legislation prohibiting profiling with binding effect on federal, state, or local law enforcement. Moreover, certain U.S. government policies continue to contribute significantly to the prevalence of racial profiling. Fifteen years after the United States ratified ICERD and one year after a review of U.S. compliance with the treaty, The Persistence of Racial and Ethnic Profiling in the United States is submitted to the U.N. Committee on the Elimination of Racial Discrimination as a follow-up report documenting violations of ICERD at the federal, state, and local levels.

The Obama administration and Congress now have an historic opportunity to take urgent, direct, and forceful action to rid the nation of the scourge of racial and ethnic profiling and bring the U.S. into compliance with both the Constitution and international human rights obligations.