Senator Ervin, “No-Knock” Warrants, and the Fight to Stop Cops from Smashing into Homes the Way Burglars Do

This post is the second in series on the militarization of policing. Check back this week from more from Radley Balko.

One of the heroes of my book is the late Sen. Sam Ervin, the Democrat from North Carolina who served from 1954 to 1974. Ervin was an old school conservative Democrat, but could be something of an enigma. He was a devoutly religious man who, while in the North Carolina legislature in the 1940s, single-handedly defeated a proposed law that would have banned teaching evolution in the state's public schools. Ervin was a brilliant man, who often slyly hid his intellect behind a veil of aw shucks country charm. But once he'd disarmed his opponents, he'd pounce with a devastating argument or flourish of rhetoric that would ultimately win the day.

Ervin was a staunch Cold Warrior and anti-communist, but he was also on the special Senate committee to investigate Sen. Joe McCarthy and his red-baiting, which Ervin found deplorable. Once his committee had concluded its work, Ervin fought for an official censure of McCarthy. He gave a brilliant speech on the floor of the Senate that disarmed the tense chamber with humor, invoked Shakespeare ("adversity, like the toad, wears yet a precious jewel in his head"), was self-effacing (he told a lawyer joke), and included two parables from the hills of North Carolina. The typically Ervinesque soliloquy swayed votes and won Ervin a lot of early respect from his colleagues. The Senate voted 67-22 to censure McCarthy.

For much of his career, Ervin was pro-segregation, or at least opposed to federal efforts to desegregate the south. He even signed the Southern Manifesto, a document decrying what its signatories called federal infringement on the sovereignty of southern states.

Ervin eventually changed his mind on those issues. And toward the tail end of his career, he became the Nixon administration's most persistent and potent adversary on Capitol Hill. Ervin was particularly angry at Nixon's early efforts to push through Congress a series of anti-crime packages that Ervin considered to be unacceptable violations of the Constitution. In particular, he was angry about a proposal that would have eliminated bail for criminal defendants in Washington, D.C., and two proposals that would have allowed narcotics cops to conduct "no-knock raids," one that would apply to cops in D.C., and another that would give the power to federal agents conducting federal anti-drug investigations.

Ervin railed against these bills – to the media, from his position as chair of the Senate Judiciary Committee, and from the floor of the U.S. Senate. There's one particularly poignant moment in my book where Ervin rants for hours on the floor of the Senate against the 1970 bill that gave D.C. police the no-knock raid power. Two influential liberals and committee chairs from Ervin's party – Sen. Joe Tydings of Maryland and Sen. Thomas Dodd of Connecticut – had already pledged support for the bill. The country was in the midst of anti-crime fervor, and both were facing reelection. So Ervin stood alone. From Paul Clancy's biography of Ervin:

On July 17, 1970, Ervin treated the few senators in the chamber and the visitors in the galleries to a tour de force. Using small Senate envelopes on which he had scribbled page numbers of the Bible, the Constitution, and his favorite history books, he spoke extemporaneously for four and a half hours. He contemptuously took the legislation apart sentence by sentence, showing at each point where it did violence to the Constitution, hoping to draw attention to what the Senate was doing. Word got around that the old constitutionalist was on his feet, fighting the Administration's crime bill.

He said the no-knock statute would give policemen "the right to enter the dwelling houses of citizens of the District of Columbia in the same way that burglars now enter those dwelling houses," and that preventive detention was "absolutely inconsistent with the policies that have prevailed in this nation since it became a Republic."

He scoffed at the term "necessity," which many of his fellow senators were using to justify the bill . . . And he gave the Senate his simple prescription for living: "Mr. President, the supreme value of civilization is the freedom of the individual, which is simply the right of the individual to be free from government tyranny."

The District of Columbia provisions, he shouted, arms waving and voice trembling, "ought to be removed from this bill and transferred to the Smithsonian Institution, to manifest some of the greatest legal curiosities that ever have been evolved by the mind of man on the North American Continent."

Hours later, still in a rage, Ervin implored the Senate "not to enact a bill which contains provisions that are absolutely hostile to the traditions which have prevailed in our country ever since it became a Republic. Once gone, the liberties which the bill threatened would be gone forever."

Washington, D.C. was of course mostly Black. And it would likely be mostly Black people who would feel the brunt of the new policy. And so here was the aging, towering figure of a senator, nearing the end of his career, standing as the only member of the U.S. Senate who was outraged at this bill that would allow narcotics cops to smash into their homes without first knocking and announcing themselves.

The bill passed easily. But then a curious thing happened. A few years later, stories began to emerge about out-of-control federal drug cops ripping down doors and terrorizing people, often without a warrant, and frequently finding no drugs or contraband at all. Ervin called hearings, and exposed the outrages to the country. He then led the charge to repeal the no-knock laws. President Ford signed that bill into law in 1975, a year after Ervin's retirement.

Ervin was a champion on other civil liberties issues as well. These other fights aren't covered in my book, but I think they're worth discussing here, particularly given the discussions we've been having over government surveillance over the last few months.

In 1971 President Nixon issued an executive order that vastly expanded the power of a creepy federal agency called the Subversive Activities Control Board (SACB). Nixon authorized the SACB to investigate essentially anyone Nixon deemed to be an enemy. When Ervin heard about this, he went ballistic, and set about to override the order. With a number of parliamentary maneuvers and some impassioned speeches in defense of the First Amendment, he succeeded in effectively cutting off funding to the board, causing its demise.

Also in 1971, the White House waged an aggressive campaign against the press. Nixon officials called journalists before grand juries, demanding they reveal their sources. They attempted to tie FCC licenses to vague requirements that TV and radio stations uphold "community interests," the implication being that undermining the Vietnam War effort or exposing federal wiretapping or warrantless spying fell short of upholding such standards. Ervin came to the aid of the press with a federal shield law allowing journalists to protect their sources without federal harassment.

When it was revealed the Defense Department had been carrying out a massive surveillance program that included databanks on just about anyone who had ever signed an anti-war petition, put a peace sticker on his bumper, or bought an anti-government book, Ervin – a career-long supporter of the Vietnam War and defense hawk – thought it was the most violent attack on the First Amendment he had seen in his career. (This was the program challenged in the 1972 U.S. Supreme Court case Laird v. Tatum.) As Ervin biographer Paul Clancy writes, "He was determined not just to kill it, but to find out who was responsible. He wanted to make sure it never happened again."

Over the span of the Nixon administration, Ervin had morphed from a fairly traditional conservative southern Democrat to civil libertarians' best hope in Congress, and arguably Nixon's most feared foe. He had also achieved more power and prestige among his colleagues – which is why Majority Leader Mike Mansfeld picked him to chair the Watergate hearings.

Now the civil liberties hero was in charge of holding accountable one of the more autocratic administration in U.S. history. Ervin was at first reluctant about the task. But as he began to see the extent of the Nixon administration's crimes, he grew angry at the lack of transparency and came to embrace the hearings as the most important undertaking of his political career. It was an opportunity not just to hold Nixon accountable, but to teach the country about constitutional government.

Even Ervin's critics came around. Clancy notes that even the liberal historian Arthur Schlesinger – a believer in the "great man" view of history who disliked Ervin for dis-empowering the presidency – praised the senator for doing "so much to educate the American people in the meaning and majesty of the Constitution."

One final personal anecdote. I grew fond of Ervin while researching my book. (This is a difficult thing for a libertarian to say about a politician!) At some point during my research, I inadvertently left my copy of Ervin's biography on a plane. So I ordered another used copy from Amazon. When it arrived, I got a nice surprise. There was an inscription inside that Ervin himself had written to Maston O'Neal, a congressman from Georgia in the late 1960s. I also found a letter from Ervin to O'Neal inside the book, written on Ervin's official U.S. Senate stationery. I apparently own the copy of the book that Ervin gave to O'Neal as a gift. 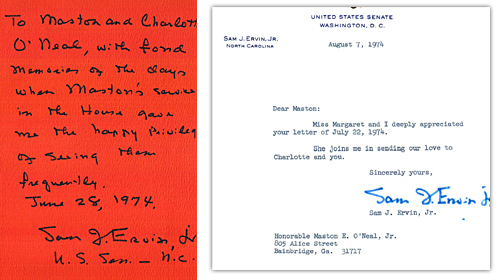 No-knock raids would of course return in the 1980s, as would the botched raids and raids on the wrong homes. These raids on people suspected of nonviolent, consensual crimes have victimized hundreds of innocent people, and needlessly taken the lives of nonviolent offenders, police officers, innocents, and children caught in the crossfire. Few politicians at any level of government have paid much attention. We could use few dozen Sam Ervins right now.

More on the Rise of the Warrior Cop: The Militarization of America's Police Forces.

For more on the ACLU's investigation of the militarization for policing in America, click here.