In response to a court order in an ACLU lawsuit, the government late Friday evening (as is its wont) released five documents relating to its process for nominating terrorism suspects for kill or capture. Most notable was the "Presidential Policy Guidance," a document particularly central to the government’s targeted killing program.

The release is important and illuminating, especially considering the backdrop of extreme secrecy surrounding the program since its inception. Before a 2013 ACLU victory in the D.C. Circuit Court of Appeals, the government had claimed that it could neither “confirm nor deny” that the program existed at all. But surprisingly, and disappointingly, the Presidential Policy Guidance (PPG) and other records released over the weekend do nothing to assuage concerns about the government’s standards governing who it decides to kill.

The dominant impression from reading the PPG is the extent to which it signals that targeted killings outside war zones have become the new normal for the United States. True, the PPG appears to be a remarkably detailed document outlining the approval process for targeted killings (and, notably, little-used capture operations) among various committees of the National Security Council and, in some cases, involving the president himself. But while the document has already been celebrated by some for pulling back the curtain on its “extraordinarily detailed” process, the PPG’s emphasis on process has a dark side.

Most critically, the PPG’s length and numbingly bureaucratic tone make clear just how normalized the killing of terrorism suspects far from any battlefield has become inside the executive branch. Under the Constitution and international law, these kinds of strikes are supposed to be — at best — exceptional and rare. The “playbook” belies that background, giving off the sense that these matters are business as usual.

The document’s emphasis on process, rather than on an elaboration of its legal standards for conducting targeted killings, obscures yet another, long-running criticism of the program: That for all the layers of internal decision making by government agencies, no court has any role in checking their work.

For years, the government has claimed that a process conducted entirely within the executive branch is a sufficient substitute for any court review — even when the government proposes to kill an American citizen. Recall former Attorney General Eric Holder’s claim, in a 2012 speech at Northwestern University School of Law, that “‘Due process’ and ‘judicial process’ are not one and the same, particularly when it comes to national security. The Constitution guarantees due process, not judicial process.”

And the government successfully defeated two ACLU attempts to force a court to weigh in on whether the government’s targeted killing program is lawful. With the PPG, the government did release some basic information concerning notifications made to Congress about lethal-targeting and capture operations. But while Congress’ oversight of such operations is important, it is no substitute for legal review by a life-tenured judge.

Worst of all, the new documents’ focus on the several layers of executive branch review concerning substantive decisions to kill comes without any elaboration on the government’s chosen legal and policy standards that supposedly undergird the PPG’s process. While we only know the general standards the government has adopted, that’s enough to know that it has transported war-based permissive legal rules for killing into non-war contexts. (That is where the PPG applies.)  And while the PPG’s policy standards are supposed to elevate protections for civilians outside of war zones somewhat, what it offers them still falls short of the legal standards from human rights law that should properly apply in such areas to protect the right to life.

For example, in a new, less redacted version of a so-called “Report on Process,” the government release removes redactions covering the “considerations” relevant to the determination that a target presents a “continuing, imminent threat to U.S. persons.” But far from being new information filling out that vague (and novel) criterion, the government merely repeats the phrasing made public in Holder’s Northwestern speech.

For example, this is from the Report on Process:

And this is from Holder’s speech:

The evaluation of whether an individual presents an “imminent threat” incorporates considerations of the relevant window of opportunity to act, the possible harm that missing the window would cause to civilians, and the likelihood of heading off future disastrous attacks against the United States.

The centrality of the imminence standard also raises a larger question about the PPG: How can such an apparently robust and detailed process actually function when a precondition for its invocation is the presence of an imminent threat? The fact that the PPG also allows the president to circumvent its elaborate process — even to address a “continuing, imminent threat to another country’s persons” — calls into question how robust, binding, and adhered to the PPG actually is.

Prior to last weekend’s release, we expected the PPG to help answer questions like these. Perhaps it does so behind black boxes. Indeed, the PPG’s discussion of the substantive information relevant to the nominations process is entirely hidden behind redactions — making it likewise impossible to know how those standards may differ when it comes to capture operations.

These are the relevant considerations for capture as spelled out in the PPG: 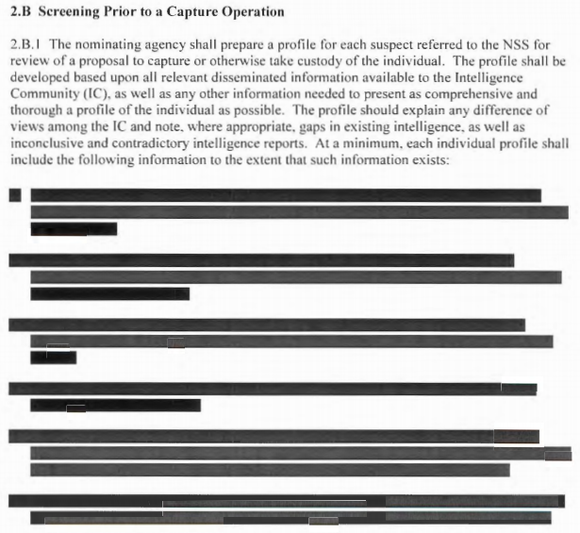 And these are the relevant considerations for the use of force: 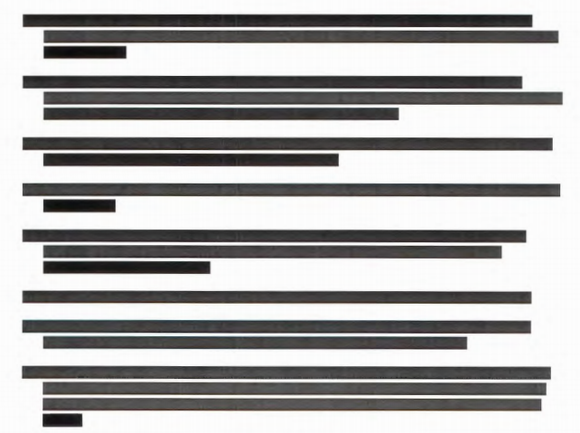 The PPG asserts that “[l]ethal action should be taken . . . only when capture of an individual is not feasible and no other alternative exists to effectively address the threat.” But the document does not define the term “feasibility” and imposes a number of additional considerations (including a plan for detention, interrogation, and “long-term disposition options for the individual”) that go well beyond any fact-based assessment of “feasibility.” In contrast to the hundreds of drone strikes since 2013, we are aware of only a handful of terrorist suspects captured pursuant to this policy.

The release of the PPG is another in the ACLU’s important string of transparency victories concerning the government’s targeted-killing program. Through our litigation and advocacy, we have forced the government to officially acknowledge its drone program; to release the legal memorandum that authorized the killing of a U.S. citizen; to publish basic statistics concerning the number of individuals it believes it has killed outside war zones; and now, to make public the legal and policy processes that regulate the targeted-killing program.

But frustratingly, too much remains secret about the program, including where the PPG actually applies, what its general standards mean in practice, and how evidence that those standards have been met is evaluated—in addition to who the government is killing, and where. With two active FOIA cases seeking additional information about targeted killings, we’ll keep seeking answers.