In March 2017, President Trump appointed Scott Lloyd to run a federal agency called the Office of Refugee Resettlement. Lloyd has almost no background in helping refugees. Instead, his main qualification for the job is that he spent his legal career furthering his anti-abortion ideology based on his religious beliefs.

So it should have been no surprise that when Lloyd took office he began imposing his religious views about abortion on the marginalized population that he is supposed help. That population includes unaccompanied immigrant minors. These are young people who come to the United States without their parents, often fleeing unspeakable abuse or torture in their home countries. Many experience sexual assault as they make the journey. Our government is legally obligated to care for these young people while they await reunification with family in the U.S., seek asylum, or are deported. That care includes access to medical treatment. 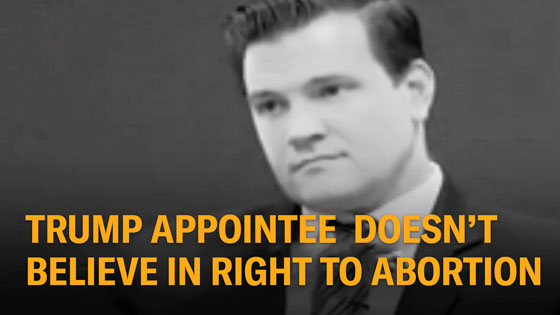 So instead of providing access to abortion, as required by the law, Lloyd subjects minors to various coercion tactics to try to force them to carry their pregnancy to term. This includes demanding that minors go to so-called “crisis pregnancy centers” from a list “approved” by ORR. Those lists were developed by two anti-abortion entities, CareNet and Heartbeat International. These are anti-abortion, religiously affiliated centers, with the sole purpose of discouraging women from obtaining abortion. One young woman, Jane Doe, who challenged ORR’s policy in court, said staff at the center “prayed for her.” Ms. Doe, and others like her, were forced to have medically unnecessary ultrasounds because of Lloyd’s policy.

Lloyd also forces minors, or the government-contracted shelter where the minor resides, to tell her parents in her home country about the pregnancy and her abortion decision, even where the minor objects and even where doing so would be dangerous for her or other family members.

Lloyd has also gone so far as to personally speak with at least one pregnant minor who was considering abortion to talk with her about her “options.” When these coercion attempts fail, and the minor persists in asking for an abortion, Lloyd simply orders the shelter not to allow her to travel to a clinic.

Lloyd has wreaked havoc on young women’s lives. The young women we represent – the “Janes” – were able to have abortions only after waging legal challenges. But by that time, Lloyd’s policy pushed them further into their pregnancy. For example, Jane Doe was held hostage for four weeks, and was forced to remain pregnant against her will until she finally obtained a court order.

In another particularly egregious situation, Lloyd attempted to intervene after a woman began the process of getting a medication abortion. After she took the first of two pills, demanded that she be taken to an emergency room to assess whether the pregnancy could be continued, including forcing her to have an unnecessary ultrasound. ORR even considered trying to “reverse” the medication abortion through an untested medical protocol against the young woman’s wishes to “save the life of the baby.”

The ACLU has been successful on behalf of the individual Janes so far, but the battle is far from over. There are hundreds of pregnant young women in ORR’s custody each year and Lloyd is still applying his policy to them. We will do everything we can to strike it down to prevent Lloyd from inflicting further harm on marginalized young women.