Delivering a Message (Actually, Hundreds of Thousands of Messages) About Birth Control to the Trump Administration

Back in October, the Trump administration issued two rules that allow virtually any employer or university to deny its employees or students contraceptive coverage based on a religious or moral objection. Although the rules took effect immediately, a comment period gave the public an opportunity to weigh in. By the time that period closed on Tuesday, people across the country had flooded the Department of Health and Human Services (HHS) with written comments opposing the Trump rules.

Thanks to the Affordable Care Act’s women’s preventive services requirement, 62 million women now have coverage of vital health care services, including all FDA-approved contraceptive methods and related education and counseling without out-of-pocket costs. So it’s no wonder that the new rules, which undermine that coverage, are incredibly unpopular.

Commenters were loud and clear: They said that birth control is basic health care, and that access to birth control is essential to women’s equality, autonomy, and economic security. They talked about what birth control has meant for their lives. For some, the ability to decide whether and when to start a family enabled them to pursue education and career goals. For others, contraception allowed them to manage and treat medical conditions that affected their quality of life. 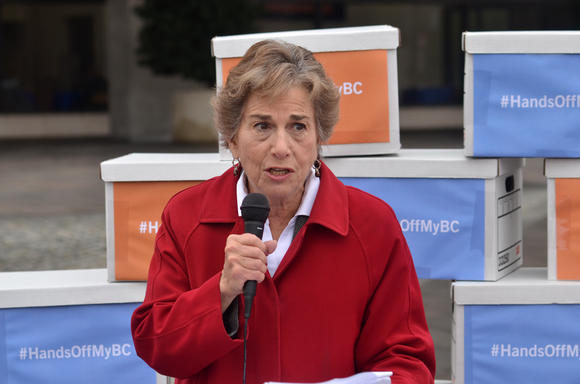 One thing that everyone agreed on? No one should have to consult their boss about it. A woman’s decision to use birth control, and to use the method that is best for her, is one that she should make with her health care provider. Neither a woman’s boss, nor the Trump Administration, should get to interfere. Allowing employers and universities to use their religious beliefs to block employees’ birth control coverage — coverage that is required by law — isn’t religious liberty. It's discrimination.

This week, ACLU joined with partners and members of Congress to deliver more than half a million of these comments to HHS, including tens of thousands from ACLU supporters and members. As we wrote in our comments, the rules violate the Constitution and other federal laws by allowing employers and universities to use their religious beliefs to harm women, and by denying women a benefit that was intended by Congress to address longstanding gender discrimination in health care. If the Trump administration refuses to rescind the rules, we’ll continue to fight them in court alongside 19 states and several other organizations.

The administration seems determined to set women back — we’ve seen one attack after another on women’s health this year, with many carried out under the guise of religious liberty. But as this week’s outpouring of comments made clear, women are showing that they won’t let this happen without a fight.

If I'm signing your pay check you better bet I'm going to tell you what you can and can't do with it. If you don't like it, find another job or go on welfare like all those porch monkeys.

Oldfart "I'm going to tell you what you can and can't do with it." No you aren't or can't tell people what they spend. I really hope that you are being sarcastic. Otherwise your an asshole.

I sent my porch monkey for some vanilla milk and she brought me chocolate. Well I grabbed that pussy like Trump on a bus as fast I could and said “you like it”. She said no, I said what makes you think I like chocolate milk bitch.

Women use birth control for many reasons unrelated to pregnancy prevention:
1.When they suffer from endometriosis.
2.To reduce ovarian cancer risk
3.To deal with severe PMS.
4.Birth control provides pain relief for severe menstrual cramps.
These decisions should be left to women and their doctor.

Thank you for sharing this article with us! I believe there will be more people like me, they can find many interesting things in this article of you http://freegiftcardgenrator.com

It's a non-issue. Before the ACA very few employers had health plans that didn't offer birth control (usually several forms of it). It was included with the medication part of the plan and an employer would actually have to specifically request for it not to be included.

The Trump Administration Thinks Your Employer Should Make Your Birth Control...

The Other Shoe Didn’t Drop on Birth Control Coverage Last Week, But Trump...