When Did "To Serve & Protect" Become "To Seize & Profit?"

This piece was originally published on The Nation's website.

Leon and Mary Adams had been living in their Philadelphia home for nearly five decades. They were eating breakfast one morning last year when armed cops streamed out of a bunch of vans and said the couple had 10 minutes to grab their things and leave. Permanently. As in, Leon and Mary wouldn't be allowed to come back. The cops then seized the property so they could auction it off, all because the Adams' grandson allegedly did a few $20 marijuana deals on the porch.

This is just one of the many stories Sarah Stillman told in the New Yorker this summer about a "process" called civil asset forfeiture. And it's not just happening in Philadelphia; it's happening nationwide to people's houses, cars, cash, and other property that cops seize and sell to make money for their departments. See how it works in our latest video in the Prison Profiteers series, a partnership between Beyond Bars, the ACLU, and the Nation magazine: 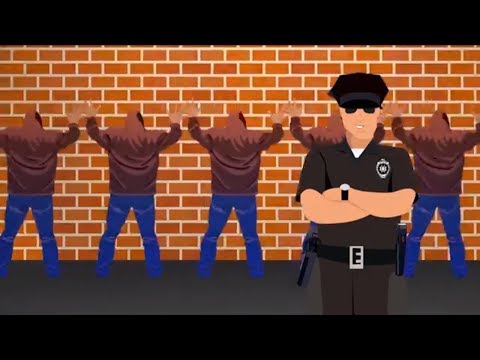 Under many civil asset forfeiture laws around the country, cops can take people's money and property without proving anyone guilty, or indeed without even making an arrest. The police just have to suspect the assets are tied in some way to illicit activity. Such was the case with Leon and Mary Adams, and it resulted in the loss of their home.

Money that cops generate from such seizures bankroll their departments, including sometimes even funding their own salaries. That gives police a strong incentive to abuse civil asset forfeiture laws, search people unconstitutionally, engage in racial profiling, and over-enforce minor offenses, needlessly increasing people's contact with the criminal justice system. The more they seize, the better off their departments are. Sometimes law enforcement officials seize a car knowing that they'll be able to drive that very car on the job. Victims often fear being jailed if they don't hand over their assets. And if they want to challenge the seizure, they rarely have a right to an attorney and often cannot afford one, must navigate complex proceedings, and often bear the burden of proving their innocence in order to get their property back.

Something is deeply wrong here. When incentives are this out of whack, abuse ensues—encouraging law enforcement to put profit above public safety. Police in Pittsburgh used asset forfeiture cash to buy nearly $10,000 in Gatorade. In just one month, cops from Bal Harbor, Florida, dropped $23,704 on trips with first-class flights and luxury car rentals. And the Milwaukee County Sheriff's office used civil asset forfeiture funds to buy nine flat screen TVs for $8,200, and two Segways for $14,500.

These stories seem almost comical until you consider the people picking up the tab, who are disproportionately racial minorities. Consider the case of an African American man driving from Virginia Beach to Wilmington, Delaware:

He was stopped by police on June 16, 1998, while driving from Virginia Beach to Wilmington, Delaware. The police officer who stopped him claimed that a taillight was out, which was untrue. Once stopped, the officer subjected him to a search by a drug dog, claiming that he "looked like a drug dealer." The officers asked him if he was carrying drugs, guns or money. He replied that he had $3,500 in cash. The officer seized the money, claiming that it must be the proceeds of drug dealing…The gentleman was never charged with a crime.

The man never got his money back.

Some states are working to stop this type of abuse. But even where some state laws are stricter, state cops can still take advantage of a loophole called "equitable sharing," which allows them to seize property under federal law and keep up to 80% of the proceeds. That's a loophole that must be closed if we're to have a fair criminal justice system. Otherwise, civil asset forfeiture will remain one more way that our system has gotten way too large, intrusive, corrupt, and unfair, as the rest of our Prison Profiteers series highlights.

Tell the Department of Justice: Don't let cops use federal law to ignore stronger state asset forfeiture protections. State and local cops should have to follow state laws if they're stricter than federal law.