This week, 22-year-old Modesto Sanchez told lawmakers of the Massachusetts Legislature about the day he and his friend rode their bikes down the street on which Sanchez lived, only to be stopped and frisked within minutes by Boston police officers. One officer asserted, "People in your hood ride bikes to shoot people." Modesto, who was 16 years old at the time, and his friend were found to be doing nothing wrong. Embarrassed, shocked, and hurt, Modesto asked for an explanation. The officer responded, "We had to stop you. You look suspicious."

Trae, a black woman who identifies as LGBTQ, spoke movingly about being slammed to the ground by police who thought she was a drug dealer simply because she touched her girlfriend's car after her girlfriend dropped her off in order to find a parking spot. Trae said, "I was caught being black at the wrong time. I put my hand on the car, and automatically I was a drug dealer." The impact on her has been profound. "I get tense when I see a cop car," she explains. "When a siren comes on, I feel like I am always ready to run. It's hard to believe your [police] job is to protect us when you violate us." 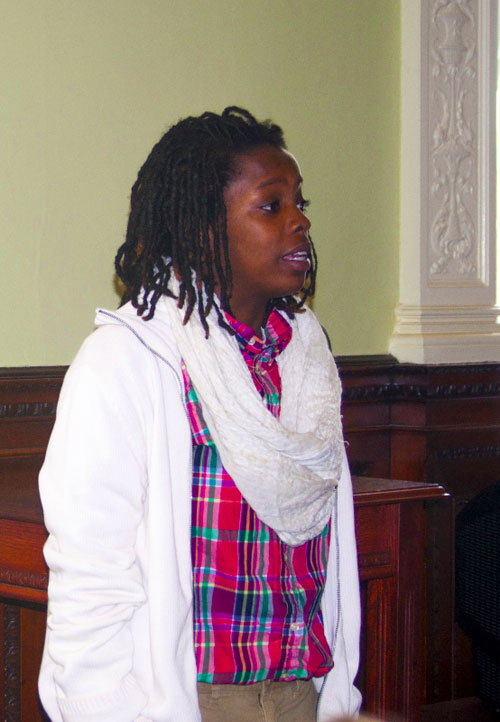 You could hear a pin drop as Modesto and Trae explained how humiliating experiences of being singled out for stops, frisks, and searches because of false assumptions about the criminality of Latinos and blacks have led them to distrust police, even when they are victims of crimes. Trae said, "If I was ever robbed or anything the last person I would call is a police officer. I don't feel protected. I feel criminalized." Modesto explained, "In my community I want to feel safe. But most of my friends tell me to be careful when I am going outside because of the police."

Unlike other states that mandate some form of racial profiling data collection, Massachusetts currently has no law requiring the regular collection, analysis, or publication of data about stops, frisks, and searches that would help identify where racial profiling occurs. This is shameful in light of evidence that police in Massachusetts' largest urban center engaged in racially discriminatory policing from 2007-2010. Our report discusses expert analysis of over 200,000 reports of Boston police-civilian encounters, which found that the racial composition of Boston neighborhoods drove police-civilian encounters even after controlling for crime rates and other factors. The expert analysis also found that blacks were more likely than whites to be subjected to repeat police-civilian encounters and to be frisked or searched, even after controlling for a civilian's alleged gang involvement and history of prior arrest.

The Boston Police Department has yet to disclose any of the 200,000-plus reports of police-civilian encounters that experts analyzed to reach their powerful conclusions. Nor has it released data from police-civilian encounters conducted since 2010, which would show whether Boston's high rates of stops and frisks have decreased or whether the problem of racially biased policing remains as bad today as it was from 2007-2010.

Massachusetts is poised to be a leader in fighting racial profiling by requiring law enforcement statewide to publish and analyze the data that will show that Modesto and Trae's experiences are not isolated. Lawmakers simply must listen. And then vote accordingly.