An Arizona law passed during the state’s 2014 legislative session criminalizes the display, publication, and sale of images fully protected by the First Amendment. On September 23, 2014, the ACLU, the ACLU of Arizona, and Dentons U.S. LLP filed a lawsuit challenging the constitutionality of the law.

The law makes it a crime to “intentionally disclose, display, distribute, publish, advertise, or offer a photograph” or other image of “another person in a state of nudity or engaged in specific sexual activities” if the person “knows or should have known” that the person depicted has not consented to “the disclosure.” Under the law, each of the following is a felony, punishable by up to three years and nine months in prison:

Our clients include booksellers, book and newspaper publishers, librarians, photographers, content providers, and associations representing them. They all offer, display, and sell a broad range of material protected by the First Amendment, including artistic, historical, and newsworthy materials.

As a result, our clients and their members, employees, patrons, and customers all risk criminal prosecution under the law for sharing images fully protected by the First Amendment. 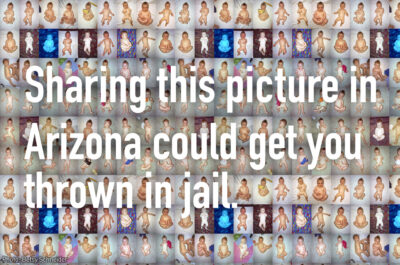