In March 2014 the Maricopa County Superior Court ruled in favor of Zander Welton, finding that his parents and physicians could resume treating his seizure disorder with a marijuana extract. Sadly, Zander passed away in September 2015. During the trial, Judge Katherine Cooper found that the Arizona Medical Marijuana Act (AMMA), approved by voters in 2010, allows patients to use marijuana extracts without fear of prosecution. In October of 2013, the American Civil Liberties Union and the ACLU of Arizona sued the county on behalf of Zander and his parents, Jennifer and Jacob Welton, because Maricopa County Attorney Bill Montgomery and other Arizona law enforcement agents had asserted that the AMMA does not sanction the use of marijuana extracts and threatened criminal charges for patients who used extracts. 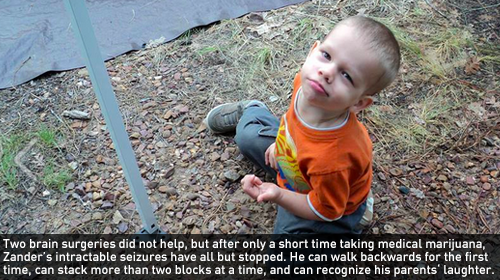 Zander had severe epilepsy and has suffered from debilitating seizures for most of his life. The oil containing the marijuana extract, in combination with dried marijuana, had reduced Zander's seizures dramatically, resulting in an unprecedented period of sustained relief. Zander's progress was threatened because his parents stopped treating him with the oil containing the marijuana extract when they were faced with the possibility of criminal prosecution.

When Arizona's voters said yes to legalizing medical marijuana in 2010, they intended for sick people to have access to this medication in forms like extracts, which are easier to ingest and can be more accurately dosed than simple plant material. Casting a cloud of criminality over medical marijuana extracts is wrong and cruel. After seeing not one but two brain surgeries fail to help their son, Zander's parents finally found an effective treatment in a medical marijuana extract and they should not be scared off from giving Zander the best medicine available to him.Through this lawsuit, the court to clarified that the AMMA's decriminalization of medical marijuana includes medicines, like extracts, that are derived from marijuana.

My 5-Year-Old's Seizures Were Finally Controlled by Medical Marijuana

On Behalf of Five-Year-Old with Severe Seizures, ACLU Seeks Ruling in AZ to Protect Access to Medical Marijuana in All Forms