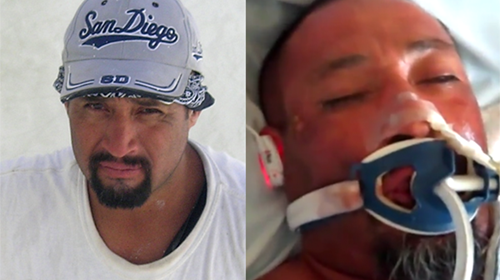 UPDATE (6/1/2016): Six years after Anastasio Hernández Rojas’ death, there sadly remains no accountability for his brutal killing. In November 2015, the Department of Justice declined to bring criminal charges against any of the U.S. Customs and Border Protection personnel involved in his death. More than six months later, CBP has not announced any administrative findings or discipline. Anastasio’s family and memory continue to be mistreated by the federal government’s failure to bring justice to his case. The ACLU, Southern Border Communities Coalition, and allies are holding a vigil today at CBP Headquarters in Washington, D.C., calling on CBP to address past use-of-force cases and commit to respect for all individuals’ human and civil rights. CBP has introduced an improved use-of-force policy, but needs to act with much greater urgency on other badly needed reforms like body-worn cameras and a transparent, responsive complaint process.

When faced with government brutality and, in its aftermath, a total lack of justice for victims we have two choices: we can despair, or we can fight back.

On May 28, 2010, a 42-year-old undocumented immigrant, Anastasio Hernández Rojas, was killed by Customs and Border Protection personnel. He left behind a widow and five children whose home is in San Diego.

PBS broadcast eyewitness video, and it is shocking. The tapes show a man handcuffed and surrounded by about a dozen agents, as CBP personnel administer what appear to be five Taser shocks. One officer has his knee on Anastasio’s neck; the words “quit resisting” are heard over the prone man.

The San Diego coroner’s office classified Anastasio’s death as a homicide, recording in addition to a heart attack: “several loose teeth; bruising to his chest, stomach, hips, knees, back, lips, head and eyelids; five broken ribs; and a damaged spine.”

Sixteen members of Congress wrote DHS, concerned that “this incident is part of a larger cultural problem at the Department.” Indeed, as the Arizona Republic has reported, of at least 42 CBP-involved deaths since February 2005, no CBP employee has been known to face criminal or civil charges or disciplinary action.

For the last four years, Anastasio’s family has been denied justice in two key ways: First, as far as they know there have been no criminal or civil consequences for the CBP agents involved. It’s long past time for the Department of Justice to bring appropriate criminal charges.

Second, CBP has not yet changed its use-of-force policies – on paper or in practice. CBP has refused to release an external review it commissioned, and the ACLU has sued. The ACLU has criticized CBP’s policies for years, and we developed our own use-of-force recommendations for CBP based on best law enforcement practices.

There are immediate steps CBP should take to avoid more tragedies like Anastasio’s.

CBP needs to join police departments across the United States in using body-worn cameras, as it has promised, along with appropriate privacy protections. Such cameras are a win-win: Officers are protected from false complaints and an objective account of events is preserved. (The true circumstances of Anastasio’s death might never have come to light if a courageous passerby hadn’t filmed the horror.) CBP must also reform its complaint process. A scathing recent report found no action in response to 97 percent of CBP complaints in which a formal decision was issued. A troubled agency like CBP needs to take complaints seriously and address internal misconduct whenever it arises.

Four years without justice for Anastasio’s family is a disgrace. Without system-wide overhaul, abuses continue to occur on CBP’s watch. Tragedies like the death of Jose Antonio Elena Rodriguez – a 16-year-old shot across the border fence in October 2012. As his grieving mother commented: “Ten shots is not an accident.”

The new leadership of DHS and CBP must enact rapid and thorough reform to address a crisis of confidence in the nation’s largest law enforcement agency.

Watch the videos at Border Communities Under Siege.