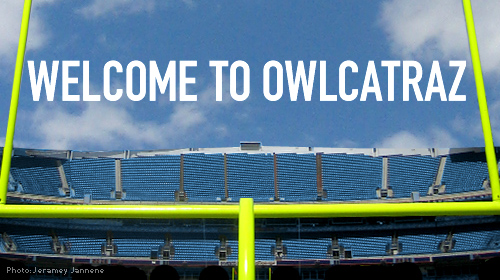 Riled up? Sign this petition urging Florida Atlantic University to walk away from its deal with the GEO Group. The Owl football team should not have to play in Owlcatraz.

In Florida, incarceration is big business. So is college football. There might be some twisted logic, then, to the GEO Group, Inc.’s latest scheme to whitewash its public image. The GEO Group, a for-profit prison corporation headquartered in Boca Raton, announced on Tuesday that it had secured the naming rights to Florida Atlantic University’s football stadium in exchange for a $6 million donation to the university’s athletic program.

FAU president Mary Jane Saunders said of GEO, “We think it’s a wonderful company, and we’re very proud to partner with them.” President Saunders must have been blinded by the size of GEO’s donation, because last time we checked the GEO Group had a horrific, well-publicized record of abuse and neglect. When the plans for the gray multi-story façade of the GEO Group Stadium, which has already been nicknamed “Owlcatraz” by students, were unveiled on Tuesday, so was a stark visual representation of FAU’s shameful willingness to associate itself with a company that is anything but “wonderful.”

To take just one example: last year, a federal judge issued a blistering order in a joint ACLU/Southern Poverty Law Center lawsuit against the Walnut Grove Youth Correctional Facility, a GEO prison that held children and teenaged prisoners in Mississippi. Calling the GEO prison a “cesspool of unconstitutional and inhuman acts and conditions” and “a picture of such horror as should be unrealized anywhere in the civilized world,” the judge ordered mass transfers out of the prison and ordered the company to stop locking children in solitary confinement. This came not long after the U.S. Department of Justice issued a similar report describing staff sexual misconduct at Walnut Grove as “brazen” and among the worst that DOJ had seen “in any facility anywhere in the nation.” A month later, the State of Mississippi ended its relationship with GEO.

Making inroads into the Florida corrections system would indeed be a major business boon for the GEO Group. Currently, Florida operates the third-largest prison system in the United States, a $2.2 billion-a-year enterprise overseeing over 100,000 inmates and another 115,000 on community supervision. The prison population has more than doubled since 1990 and nearly quadrupled since 1984.

Of all states, Florida imprisons the second-highest number of prisoners – over 11,000 or approximately 11% of the state prison population – in private facilities. And about 10 miles from the FAU stadium, GEO operates the 700-bed Broward Transition Center, a U.S. Immigration and Customs Enforcement detention center. The Broward facility is the only immigration detention center in Florida run by a private company, to the tune of an annual $20 million contract with the federal government. BTC is unique in that it is reserved for immigrants who have committed no crime or a nonviolent offense. While many of the detainees pose no threat to the public, the conditions at GEO pose a substantial threat to their health and well being.

Last year, two young people with the National Immigrant Youth Alliance, both brought to the U.S. undocumented when they were children, turned themselves in to gain access to BTC and investigate the conditions. They reported seeing lengthy and unnecessary confinement and numerous incidents of substandard medical care. They report a woman returned to her cell bleeding the same day of her ovarian surgery, and a man denied access to medical care for days while he urinated blood. In response to their report, 26 members of Congress demanded an investigation into the quality of medical care provided at BTC.

The $6 million that FAU accepted from GEO this week should not be viewed as a philanthropic gift, but a purchase of 12 years of stadium naming rights, advertising to improve the company’s image after its highly publicized improper treatment of detainees.

It is particularly galling that FAU and GEO made their announcement in the midst of FAU’s commemoration of Black History Month. Prison profiteers like GEO depend for their profits on the continued large-scale incarceration of young men and women – many of whom are people of color. Nationwide, 58% of the people in prison are African-American or Latino, and 30.3% are between the ages of 18 and 29. (Indeed, one researcher recently found that African Americans and Latinos are even more overrepresented in private prisons than public prisons.). So the FAU Owls football team (most of whom are themselves African-American) will be sponsored by a company whose core business depends on the continued overincarceration of young people who look much like themselves.

TAKE ACTION: Join the ACLU, Beyond Bars, and the FAU community and ask FAU to walk away from GEO’s tainted money.